At the turn of the century, Industrialization and Urbanization brought prosperity to Canada and Canadians by improving and altering their livelihoods for both positive and negative reasons. According to the authors, Industrialization and urbanization led to the growth of the economy, development of the east, west and central cities, increase of rural to urban migration, the rise of the middle class and the recognition of women in the work force.

Financial Investment through banks, foreign, government and private investors led to a boost in the Canadian economy.

Don't use plagiarized sources. Get your custom essay on
“ Industrialization and Urbanization ”
Get custom paper
NEW! smart matching with writer

(Francis, Jones, Smith 132). These investments accelerated industrialization and urbanization causing an influx of large banks, commercial institutions and transportation services in urban areas (Francis, Jones, Smith 133). These were the sources of large scale employment opportunities for Canadians. According to the authors, Industrialization caused economic growth in east, west and central Canada.

In Nova Scotia, “businesspeople invested in steel products to take advantage of the cape Breton coal fields” (Francis, Jones, smith 138) and in British Columbia, “resourced based industries such as mining, forestry, fisheries and agriculture improved”.

(Francis, Jones, Smith 139) . The authors argue that Urbanization occurred at a rapid rate in the prairies due to the high demand for wheat which was the primary trade product. Winnipeg for example was nicknamed “hub city” because it had numerous rail way links connecting it to the east making it a major heartland city.

The authors state that Ontario and Quebec became major heartlands by focusing on small scale consumer goods that they supplied to the western and eastern regions of the country.

These lowered the number of older children required to work in the farms. However, it can be argued that mechanization caused the loss of job opportunities to Canadians in rural areas because human and manual labour was replaced by machines that did twice as much work and functioned better. An example of this is the “iron chink” that replaced Asian workers (Francis, Jones, Smith 139). Due to Urbanization, a lot of Canadians were educated and trained in multiple trades according to the authors.

Women were educated in factory, clerical and teaching professions while the men worked in the mines and construction. This huge step towards female recognition in the workplace was a big contrast from their previous roles of home making and taking care of domestic chores. As stated by the authors, women were eventually allowed to practice professional careers. An example of this is Emily Jennings Stowe who became the first female Canadian to set up a hospital in Toronto whilst her daughter, Augusta Stowe became the first female to receive a Canadian medical degree (Francis, Jones, Smith 158).

Industrialization caused an upsurge of immigration in the urban centers leading to the acceleration of urbanization (Francis, Jones, Smith 137). However, this rapid population growth soon started to cause problems. These include the emergence of slums in highly populated centers, lack of proper sanitation, deterioration of health and the rise of prohibition evident through the number taverns, music halls and cinemas built for entertainment purposes (Francis, Jones, Smith 153, 155). Social stratification caused physical separation between the working class and the middle/upper class areas.

A lot of cities became “ghettoized”, heavily populated and undesirable to live in (Francis, Jones, Smith 153). Working conditions were harsh and monotonous leading to a lot of grievances by workers who were later on managed by unions which were formed between 1850 and 1890. The unions championed workers’ rights and work place safety and security (Francis, Jones, Smith 161) In conclusion, Industrialization and Urbanization to some extent brought a lot of prosperity to Canada and Canadians.

This was addressed by the authors in the book, Destinies: Canadian History since confederation. The authors state that industrialization accelerated urbanization and this in turn led to the growth of cities. These became major heartlands that provided resources and goods to minor hinterlands surrounding them. However, due to the drastic growth of industrialization, city dwellers experienced over population, poor living standards and harsh working conditions that led to the deterioration of their health and massive alteration of their lifestyles. 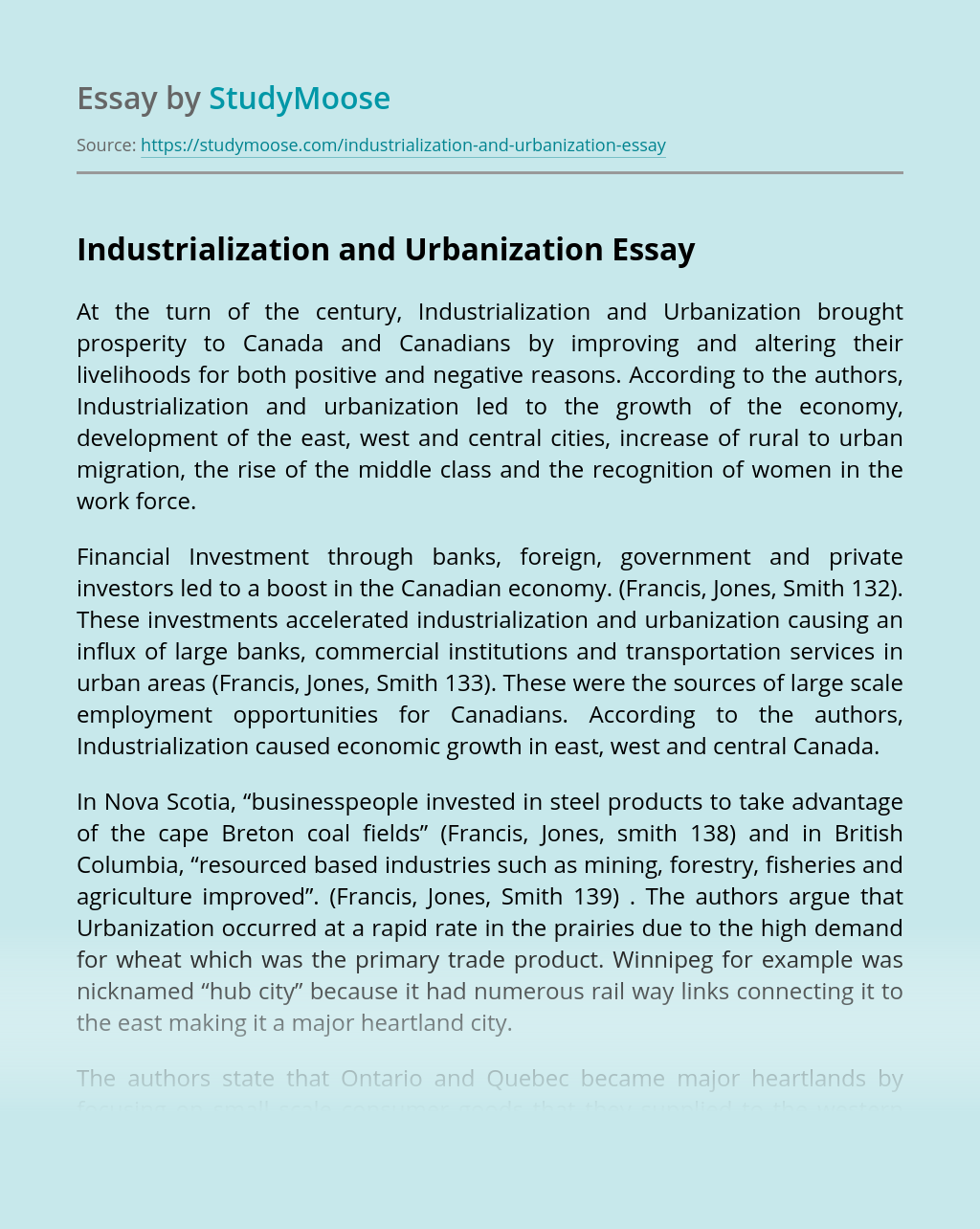