Industrial revolution occurred in England between 1750 and 1850. This revolution was about changing the old production processes to new for the purpose of making more profit. There were major changes in agriculture, manufacturing, mining and technology which had a significant effect on the economy and culture of England. England was the starting point of the revolution and after England it spread to Europe, North America and finally the entire world. Basically, it was resulted in industry and machine manufacturing, instead of the old system which was agrarian and handicraft economy.

Don't use plagiarized sources. Get your custom essay on
“ Industrial Revolution in England ”
Get custom paper
NEW! smart matching with writer

Industrial revolution influenced every aspect of daily life. This revolution led drastic changes. Technological, socioeconomic and cultural features are the main features that changed and developed in the Industrial Revolution.

Firstly in the technological field, people started to use new basic materials such as iron and steel and new energy sources such as electricity, steam engine, etc. were introduced. Also, new machines invented, for example spinning jenny. Human energy expenditure becomes smaller as a result of invention of new machines.

Lastly, factory system occurred and a new organization way emerged with that. This change led division of labour to occur. Industrial revolution was a very very important social event, it changed and improved the world and there are some important terms, peoples and matters which were the main building blocks such as coal, spinning jenny and steam engine. Firstly, coal. Coal and industrial revolution were connected to each other. Before the revolution people used coal but what they use was very close to surface and they didn’t get benefit from it.

Before the revolution there were 2 types of mines; drift mines and bell pits.

There were small scale of this and only homes and local industries used these types of coals. But after the revolution demand on coal increased a lot because coal was the energy source for machines. More machines needed more coal. Therefore, coal mines got deeper and deeper; coal mining became very essential for factories. Secondly, spinning jenny. First spinning jenny was invented by James Hargreaves; jenny was the initial word for engine. There were 20.000 spinning jennys across Britain in 1778. Samuel Compton improved spinning jenny.

Thirdly, steam engine. Steam engine converts heat energy to mechanical energy by pressurized steam. It was invented by Thomas Newcomen. He found the first practical engine which was used for to pump water out of mine. James Watt developed Newcomen’s steam engine and it used in locomotives and ships (Western Civilization,348). Industrial revolution took place in England but not in China or the Islamic countries. The reasons behind it will be discussed in the next paragraphs.

Also England developed its transportation by iron. As a raw material iron was a lot in England and people used this iron to make railways, ships, etc. Transportation was very important for a revolution to occur (Science, Institutions and the Industrial Revolution,p.18). Also England had lots of mines and mines contain energy sources such as coal. Machines, steam engines, etc. needed source of energy to work. So England was very suitable for that. On the other hand, Chinese mines were spread all around the country and they weren’t close to each other, so it was hard and expensive to connect them and collect each raw material. Thus, Chinese didn’t use these sources.

As it discussed in the above paragraphs Chinese transportation was bad. In addition to that Chinese stand point was different from British. Schools, institutions taught different things. Islam is a different religion than the other and it was not open to new inventions or new ideas in those years. Their strong beliefs avoid them to develop themselves in terms of science and they didn’t develop as much as England and Europe.

In conclusion, I think industrial revolution changed the world and it had significant impacts on daily life. The technology and all the other stuff that we have today are here because of the industrial revolution. Because in today’s world everything, every product come out of factories. There are lots of rational reasons why the revolution occurred in England but not in China or Islamic countries. Marketing, technology and energy are the examples for the emergence in England. 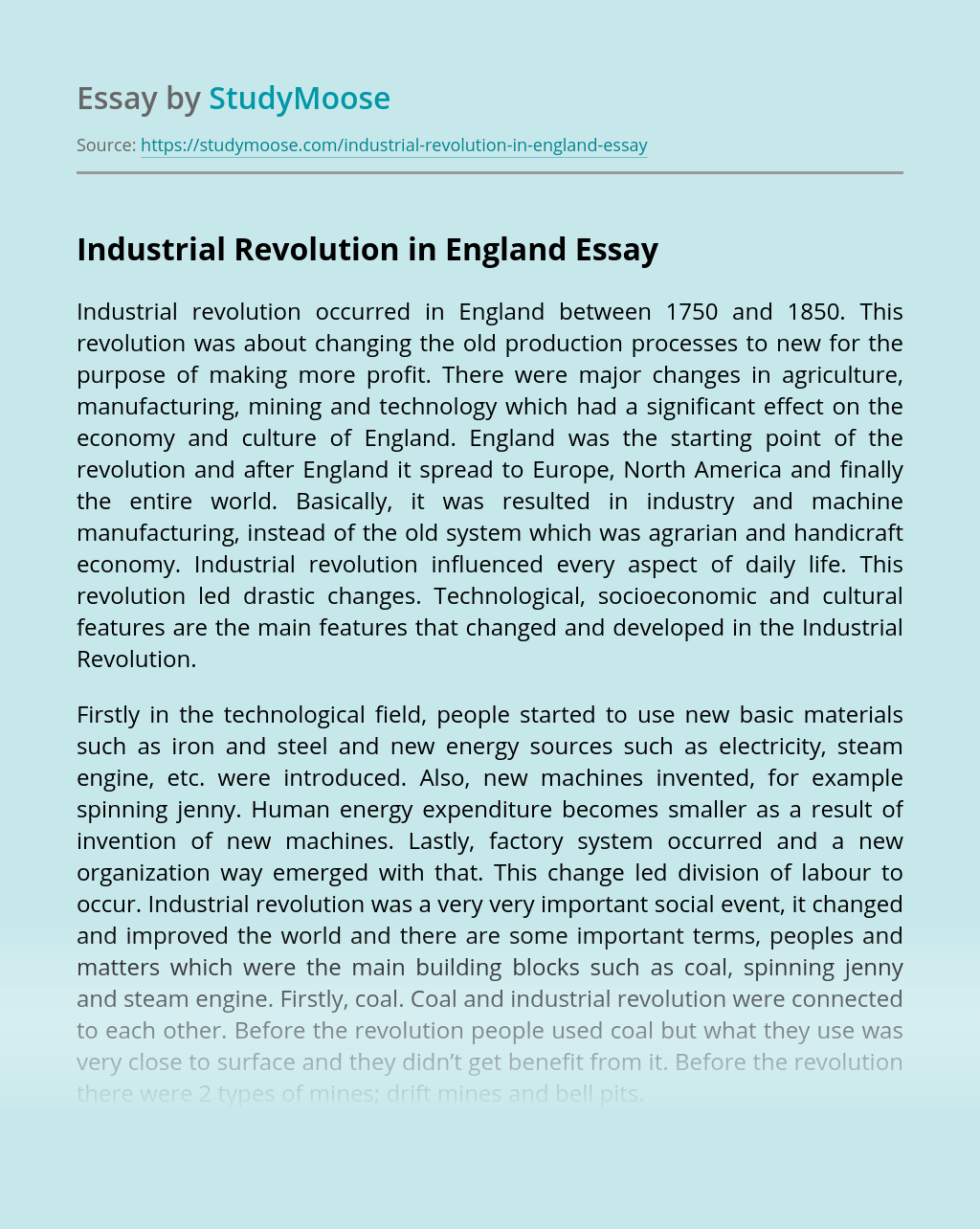