Indonesia is a country within Asia populated with nearly 220 million people. It has a strategic location astride major sea lanes and is an archipelago of 17,508 islands (globalEDGE, 2013). It is also deemed the world’s most Muslim nation where nearly 85% of the population consider themselves Muslim; while still remaining one of the most ethnically diverse countries. Indonesia is known for its natural resources such as: mining, oil and gas production, and forestry (Hill, 2013). From a political standpoint, Indonesia has a mixed economic system in which the economy includes a variety of private freedom, combined with centralized economic planning and government regulation (globalEDGE, 2013).

Indonesia has experienced many political, economic and environmental disasters. Although economic growth was prevalent prior to 1997, the actions of the historical dictator Suharto influenced the beginning of the downward spiral of the country. The country accumulated major debt by what is referred to as “crony capitalism” as Suharto used his command of the political system to favor the business enterprises of his supporters and family (Hill, 2013).

As a result the current economic front, while it has gotten better, Indonesia still lags behind its Southeast Asian neighbors. Other central issues that stem from the foundation of economic destruction are: poor infrastructure, high unemployment, slow growth in labor productivity, significant foreign capital has left the country, decline in public, private and foreign investment, endemically high level of corruption, and business activity is delayed significantly by “red tape” or greater scrutinized processing procedures. While there are numerous issues that are occurring throughout Indonesia, all require attention in order to help stabilize the country.

Indonesia has been known to share the same common goals as the United States as both countries firmly support a vast and diverse country. The three goals shared are: democratization, sustainable economic growth, and territorial integrity (Gelbard, 2000). Democratic government and economic well-being are the most effective guarantors of domestic stability. Potentially, the success of these three goals in Indonesia could translate into greater stability in Southeast Asia and the Asia-Pacific region. Indonesia’s Constraints of the Central Issue

Indonesia’s main constraint to a successful future is the corruption that occurs throughout the country. It is said that although the dictator leadership has been removed, corruption is still very much alive throughout the entire legal system, including the police and prosecutors (Hill, 2013). Corruption occurs most commonly in Indonesia through the form of bribery. Although Indonesia does have anti-corruption policies and procedures in place, it is reported that the politically elite are included in bribery schemes so frequently that the policies and procedures lack any follow through. Additional constraints to achieving the countries goals and alleviating the central issues are: poor infrastructure, environmental disasters, and red tape for businesses. Alternatives to Alleviate the Central Issue

While there are many potential paths that can be used as alternatives to alleviate the central issues in Indonesia, the following must be addressed: eliminating corruption, bettering the country’s infrastructure, and promote internal and external investment into the country. Beginning with eliminating corruption, as an alternative to allowing it to continue and negatively affect the political and economic divisions as it does today, the ideal would be to align supporters of the anti-corruption drive to help strengthen the policies and procedures and also help push out the offenders that are still participating in corruption. It is key to have political and legal participants who believe in the anti-corruption laws and are willing to enforce them for the good of the country.

Stabilization and development in Indonesia should remain the primary focus in order to help alleviate the central issues of the country. The main alternative to address would be the corruption that occurs within Indonesia and implement policies to help reduce the bribery while monitoring and punish those who are participating in bribery acts. As Indonesia stands now, although there is already a drive to alleviate corruption but the political offices that do not support them continue to participate in bribery and other forms of corruption. According to estimations by the World Bank, their organization lost $48 billion to corruption in Indonesia between 1977 and 1997 (Quah, 2011). As the country begins implementing and correctly practicing anti-corruption laws and properly punishing offenders, the economy will begin to see a fluctuation in excess cash flow with will create a waterfall effect to help rebuild the economy and infrastructure of the country. Once the country begins showing signs of economic and political reform, the country itself will open up more opportunities to rebuild relationships with foreign investors, such as private investors in the oil industry that could potentially help Indonesia restore its status as an exporter of oil. Implementation Plan

In the case of Indonesia and their turmoil at this point in time, it has been evaluated that there is not safe road to economic and political stability except economic development; rather a development program must be launched which will permit signification increases in per capita consumption over a short period of time, while at the same time accumulating capital and changing the structure of production so as to provide a permanent solution to the balance of payments problem and to launch a process of continuous economic growth (Higgins, 1957). The following are key components that must be address and repaired before Indonesia has any chance at being a successful prosperous country. Lack of Political Will

Low Risk of Detection and Punishment
Low Wages of Civil Servants
Expansive Role of Governments in National Development
Asian Culture of Gift Giving Separated from Political Policies (Quah, 2011)
First and foremost, Indonesia must eliminate the issue of corruption at the source: within the political parties. Indonesia exists in an environment having established anti-corruption laws with a single anti-corruption agency, limiting the consequences and punishment for acts of corruption. Indonesia must implement an action plan such as Singapore and Honk Kong SAR as they have succeeded in minimizing corruption and rebuilding their economy. Again, this would entail commitment of political leaders, updating policy context to be more favorable, and impartial implementation of effective anti-corruption measures.

As the corruption issues begin to be regulated and stabilized, further development can be focused on within the country. Cash flow will be greater as less money will lost in bribery and will be able to be rerouted to development of the coutnry’s infrastructure. As Indonesia begins to rebuild its political and economic front, the country will become more appealing for international organizations. As private investments increase, one can anticipate that public and international investments will also increase. However, the “red tape” for business that are in placed now will need to be evaluated and potentially redefined to help streamline new business development in Indonesia. As the necessary changes are implemented, Indonesia will also be able to strengthen the exports of their natural resources. They will begin to rely less on imports as they rebuild their manufacturability, in turn increasing their exports as well as profit from exports. This again will be a function of opportunity for foreign investment and will help strengthen foreign relationships for international business. All in all, without these measures being taken, Indonesia will remain a country in debt, run by corruption with a failing economy. These changes are required for a successful future for Indonesia both internally within the country and externally within foreign international business. 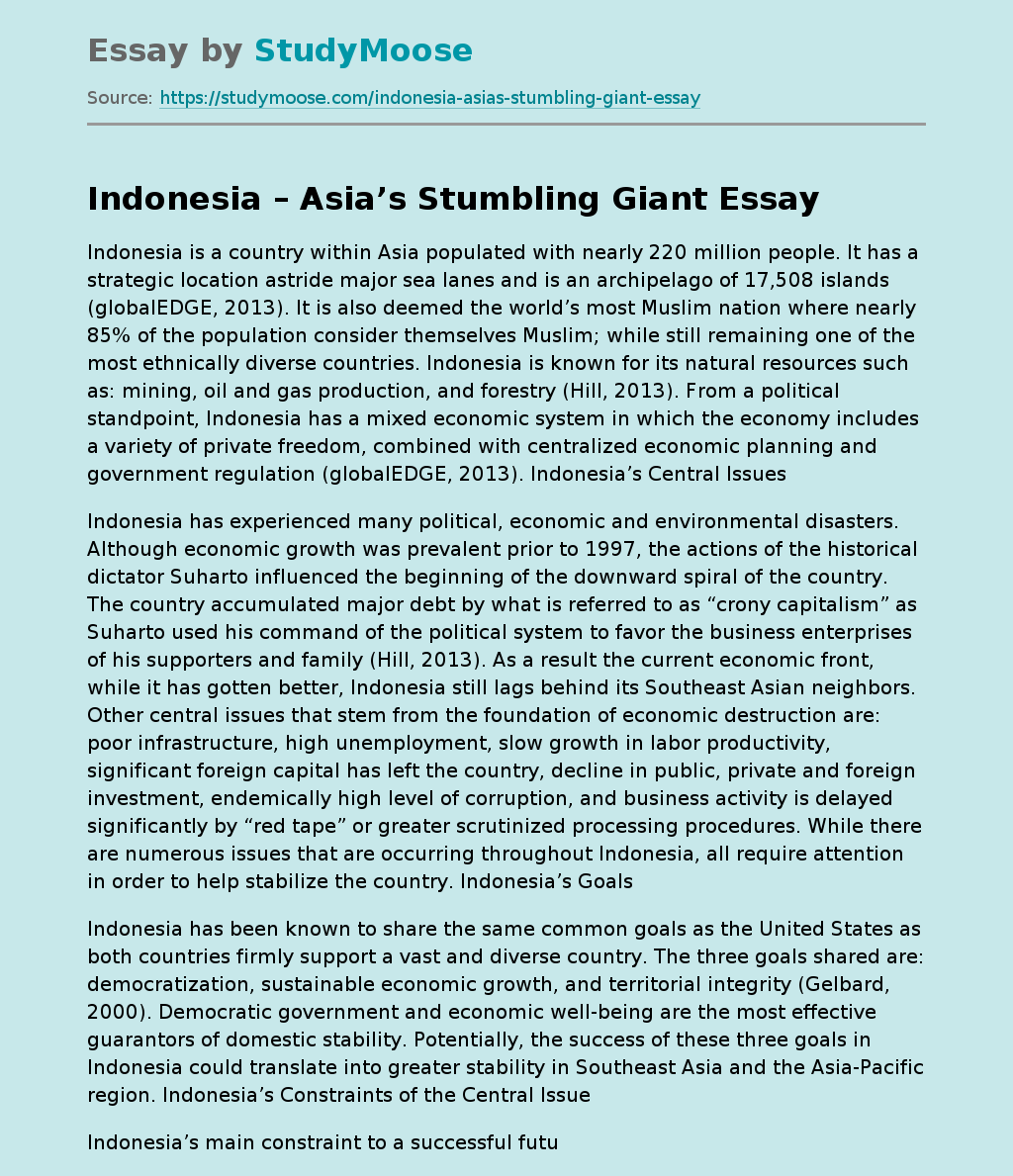