Indonesia as a Country for Conduction of Business

Indonesia geographically is located in Southeast Asia. It also located between two oceans the Indian and Specific Ocean. Its total area is 1,919,440 sq km. its climate is tropical, hot, and humid. The nature resources in Indonesia are petroleum, tin, natural gas, timer, bauxite, copper, fertile soils, and silver. Indonesia also has natural hazards such as floods, severe droughts, tsunami, earthquake, volcano, forest fires (Cavusgil, Knight & Siesenberger, 2008). Indonesia’s population is 240,271,522. The breakdown is as follows: 0-14 years are 28. %, from 15-64 years are 66%, and from 65years and above is 6% of the population (Central Intelligence Agency, 2009).

+84 relevant experts are online
Hire writer
Don't use plagiarized sources. Get your custom essay on
“ Indonesia as a Country for Conduction of Business ”
Get custom paper
NEW! smart matching with writer

The Indonesian population growth rate is 1. 136%. Its net immigrant rate is -1. 24. Indonesian ethnic groups are Javanese 40. 6%, Sundanese 15%, Madurese 3. 3%, Minangkabau 2. 7%, Betawi 2. 4%, Bugis 2. 4%, Banten 2%, Banjar 1. 7%, and other unspecified 29. 9%. As we can see there are a lot of groups that lead to lots of religions, such as Muslim 86. 1%, Protestant 5. 7%, Roman Catholic 3%, Hindu 1. 8%, and other unspecified 3. %; even though, Indonesia has many languages caused by colonies. However, its languages are Bahasa-(the official language), English, Dutch, and local dialects-(spoken by the Javanese) (Central Intelligence Agency, 2009). The capital of the Republic of Indonesia is Jakarta. It is republic government type. Indonesia gained its independence on the 18 Aug 1945, which also is the national day/holiday for the country. Indonesia’s constitution was restored on 5 July 1959; the legal system is based on the Roman-Dutch law.

In Indonesia, many political parties have lots of pressure on groups and leader such as the Indonesian Women’s Coalition, Islamic Defenders, national alliance for freedom of religion and faith, and Oil Palm Watch (Hofstede, 1967-2009).

Indonesia’s economic is facing a hard time during the world financial crisis. Indonesia’s GDP-(purchasing power parity) is $915. 9 Billion on 2008; its growth rate is 6. 1%; its GDP-(PPP) is $3,900 for the same period 2008, and it has unemployment rate of 8. 4%. The inflation in Indonesia is also high which is 11. % as of 2008. However, FDI stock is $63. 46 billion on 2008 at home Indonesia, and FDI abroad was $4. 277 billion at 2008 (Central Intelligence Agency, 2009). Cultural Environment A person who is conducting a business in Indonesia should be aware of the four risks in the country, which are commercial risk, currency risk, country risk, and cross cultural risk. The cultural environment is the one I will concentrate on it. Each country has its own culture attitudes, beliefs, religions, customs, lifestyle, and languages (Budiardjo, 2008).

Indonesian attitudes toward international business or someone who want to conduct a business in Indonesia is positive. As I have read in Jakarta online news that all Indonesians’ attitude have changed from riots and violence and more concern on change to the better which they call it normalization of Indonesian politics. The world financial crisis has stirred them to think forward and open a free market to support the Indonesian economy. James said: “The principal reasons for optimism are the restoration of order, sign economic recovery, and growing reform and democracy.

President Susilo Bambang leadership and efforts to combat corruption and get more children into school are also important according to participants. ” As I mentioned, all Indonesians are looking forward to change, and they stand for the government when they wanted to make public sector to private sector. Indonesia helped USA to destroy terrorism. James said, “nevertheless, attitude toward US remain unfavorable…. many of participants favored boycotting American products as were opposed to it under certain condition. ” Indonesian customs are emerging by the emerging of religions and ethnic groups.

Each group has his own tradition that gained from his religion and group. Indonesia has lots of ethnic groups and religions, so the tradition there is different from city to city (Asian Info, 2000). The lifestyle of Indonesia is the same to any other countries. There are the rich people and there are the poor people. In the capital, you will find most of the businesses offices. However, it is a good place for business, especially for tourism, so tourists will visits a good place for resorts on both sides of the oceans-(the Indian Ocean and specific ocean).

Indonesia and Hofstede’s cultural value dimension is explaining the power distance-(PDI), Individualism vs. collectivism-(IDV), masculinity vs. feminism-(MAS), and uncertainality avoidance-(UAI). First, the power distance is clarifying the differences and hierarchy between families, which it ranked very high in Indonesia as 78%. Secondly, the dividualisim refer to the people or nation are they working as a group or each person by himself, which ranked low in Indonesia about 14% (Office of the US Trade Rep, 2009). Then the uncertain avoidance is manager who has high/low tolerating to the risks, rules, and regulation.

Indonesia consider the second high ranked high UAI as 48%, which means Indonesia is very strict to their rules, regulations, and laws, and it also does not like changing. Finally, the masculine is the society is concern in money and both men and women work, which Indonesia ranked approximately above 40%. In conclusion, Indonesia has combination of high power distance and uncertain avoidance that leads to the top in position to creates rules and regulations that empower his position and businesses (Hofstede, 1967-2009). Country Risk Indonesia has established laws and regulation since the beginning. It also has shown a variety of laws.

The justice system also categorize as three classes. To elaborates, the three courts are the lower court, the appellate court-(the high court), and the supreme court-(the highest court). The highest court also gained high supportive from the Indonesians public and international community for its efforts (Castle & Callahan, 2007). In addition, Indonesia also established the foreign direct investment law on 1970, which was required by the government. An example of this is structured restricted the liability of the company. It also provided investment licensing, and permits for non-Indonesian employees.

On contrast, the investment licensing is not provided to banking, insurance and stocks, Oil, and gas. According to Ali: “An important feature of the Foreign Investment Law is the guarantee that the Indonesian government will not nationalize a foreign investment or revoke the investor’s rights to control a foreign investment, except where it is declared under Indonesian law to be in the national interest to do so and then only upon payment of mutually agreeable compensation determined in accordance with principles of international law. FDI laws are motivating investors to operate in the country by rules. FDI should tell the government what kind of business will be conducted, sets priorities and regulations. Also, some FDI cannot be taken by itself without a Indonesian partner; FDI can’t conduct without local participation said Ali, and the government mentioned them all, such as harbors, production, electric power, telecommunications, shipping, aviation, drinking water, railway, atomic reactors, and media, said Ali.

The government called a list “negative list” this is the list that they want to reduce or erase restrictions because it was helping the country domestically and foreign. Another regulation for FDI is the expiration after 30 years, so they can renewal it; otherwise, domestic investment will take control of it (Office of the US Trade Rep, 2009).

Indonesia as a Country for Conduction of Business. (2016, Sep 24). Retrieved from https://studymoose.com/indonesia-as-a-country-for-conduction-of-business-essay 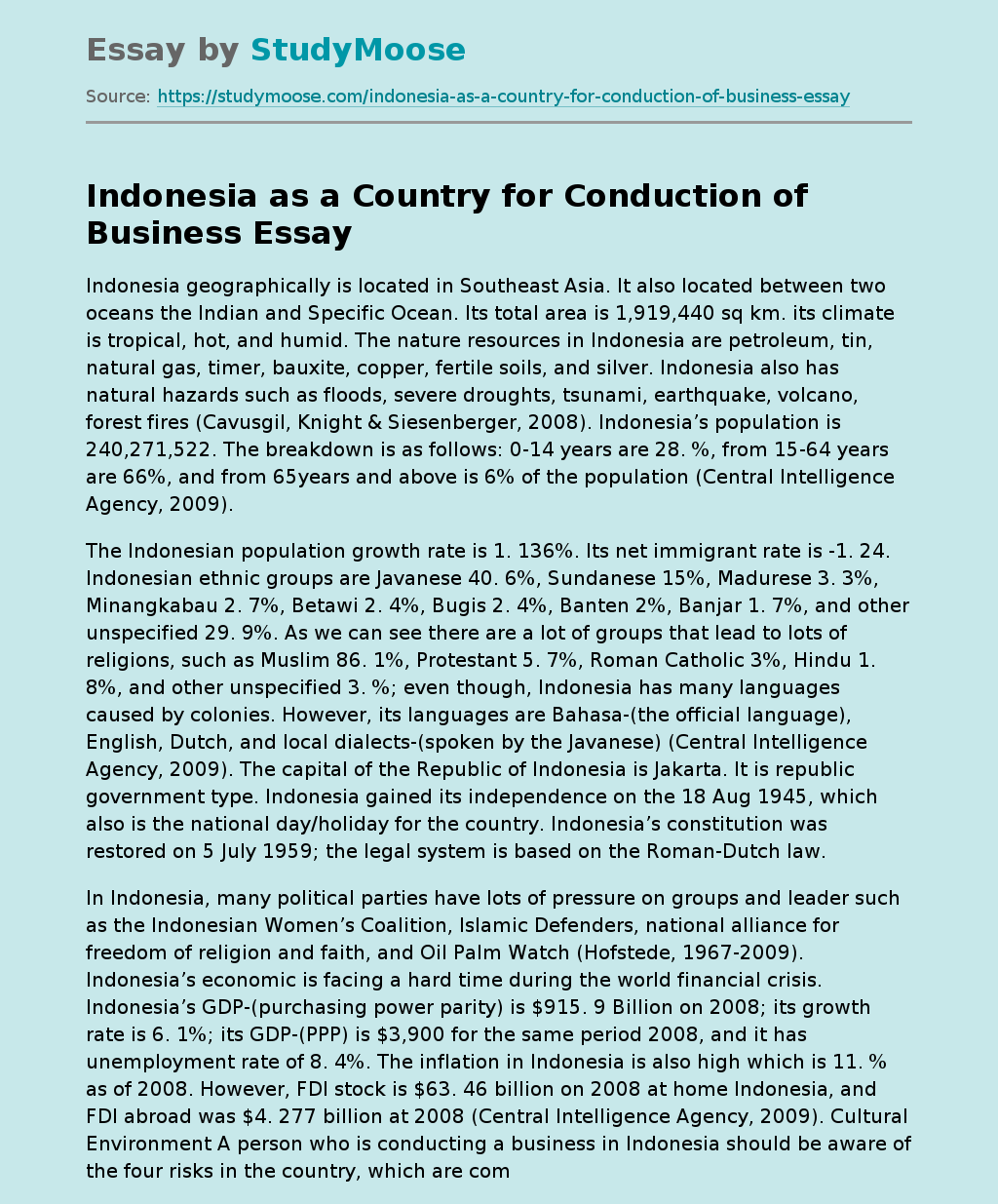