Indivisible relationship amid the essence, existence

In Life of Reason, Santayana informs his philosophy, an investigation of men’s evolving mind in relation to nature by utilizing a thorough method of analysis and synthesis that allow the readers to look at a big picture on the holistic level. Analysis dissects the whole into absolute principles that cannot be further broken down and examines the dismantled core constituents by assuming the effect of causes in reality. This, in result, produces a complicated web of connection in its context and meaning to maximize the comprehension of his philosophy in a broad-spectrum by the methodology of synthesis.

Don't use plagiarized sources. Get your custom essay on
“ Indivisible relationship amid the essence, existence ”
Get custom paper
NEW! smart matching with writer

Such usage of complete analysis, and assembling the specific information via synthesis creates a structure that relies on Santayana’s continuous rationalization of cause and effect relationship. Due to Santayana’s microscopic approach, each fundamental division can be regarded as a cause of a certain event, or the cause of itself as well. Thus each of these components establishes few vital principles: natural essence of the universe, of human and nature, in specific, existence of man, cause and effect of satisfaction, and the formulation of ideal.

Repetition of the cause and effect structure holds a critical position in this composition, thus, Santayana discusses these principles within such order that its’ cause and effect relationship would be distinguished clearly. The four principles impose their dependent state for each principle causes the next principle introduced. Among these fundamental principles, the essence holds its position as the very basis of all things. Without this self-causing and self-producing essence, the existence of all things, such as human and nature, could not be possible.

The essence exists at two specific different levels: an intrinsic and a material level. For the essence exists in a very indispensable level, it mimics the natural flux, a simultaneous moving center. The natural flux maintains its equilibrium by motion, constantly thriving for the better adaptation to the environment. Such occurrence subsists not only at the natural level, but also in material level as well. Everyman dreams of idealistic state and constantly thrives for achieving his presets, however, it is absolutely necessary that the whole process begin from the containment of the essence in him.

The constant moving nature that resembles the natural flux enable man to reach out for the better and improved self. The idealistic states continuously transforms as well along with the changing of essence in one. The change occurs through the movement, which also can be divided into two different parts: internal force and external force. The internal force becomes intact with the essence, which in result creates a cause of satisfaction when it is fulfilled. However, it is must recognized that the internal force does not act alone, but in conjunction with the external force, the nature.

Without the essence, one’s existence is impossible, and through this process, man can recognize the existence of conscious within himself. When one’s existence is formulated, man acknowledges his urge to find purpose in life, which can be also regarded as ideal, a cause of satisfaction. The completion of these concepts spawns satisfaction in man’s life. From then on, man continues to move on to the next level of idealistic goals, explaining the essence’s constantly moving nature. This explains the very close and indivisible relationship amid the essence, existence, and ideal.

As it is stated previously, the essence mimics the natural flux. Thus the movement occurs through man’s impulses. Such intrinsic impulses are the cause of satisfaction. Man exists through his essence and natural flux, the moving center. By his essence, Santayana means the innermost of a man, driven by the desire of self-reproduction, a very basic and yet primitive animal instinct. The continuous flux enforces man to set higher ideal and the action is encouraged by the one’s soul. The idea of motion supports many of the values introduced in the chapter of love, family, free and ideal society.

Motion gives the essence, a self a motivation of exerts himself forward for ideal, and a higher set of goals, and it also describes the process of man’s actual transformation in his thoughts and position in society. Man is in perpetual motion to reach the equilibrium of the ideal state that keeps on changing from all experience he gets. This repetition of perpetual motion of a man explains the man’s intense desire to procreate. Therefore, the idea of motion and its relation to man’s soul and essence, that allows man to create his role in society and his position within, is crucial.

Reproduction is the primary over nutrition for it has a potentiality of transferring a man’s essence to a yet to be created body form. Reproduction is a non-natural occurrence that initiates life, which satisfies man, for he has achieved transferring his very soul to a new creature. Man is in perpetual motion to reach the equilibrium of the ideal state that keeps on changing from all experience he gets. This is where love comes into the analysis. The cause of reproduction can be the nature of a man to forward his inner flux or love, achieving personal satisfaction that may vary in each occasion.

Indivisible relationship amid the essence, existence. (2020, Jun 02). Retrieved from http://studymoose.com/indivisible-relationship-amid-essence-existence-11924-new-essay 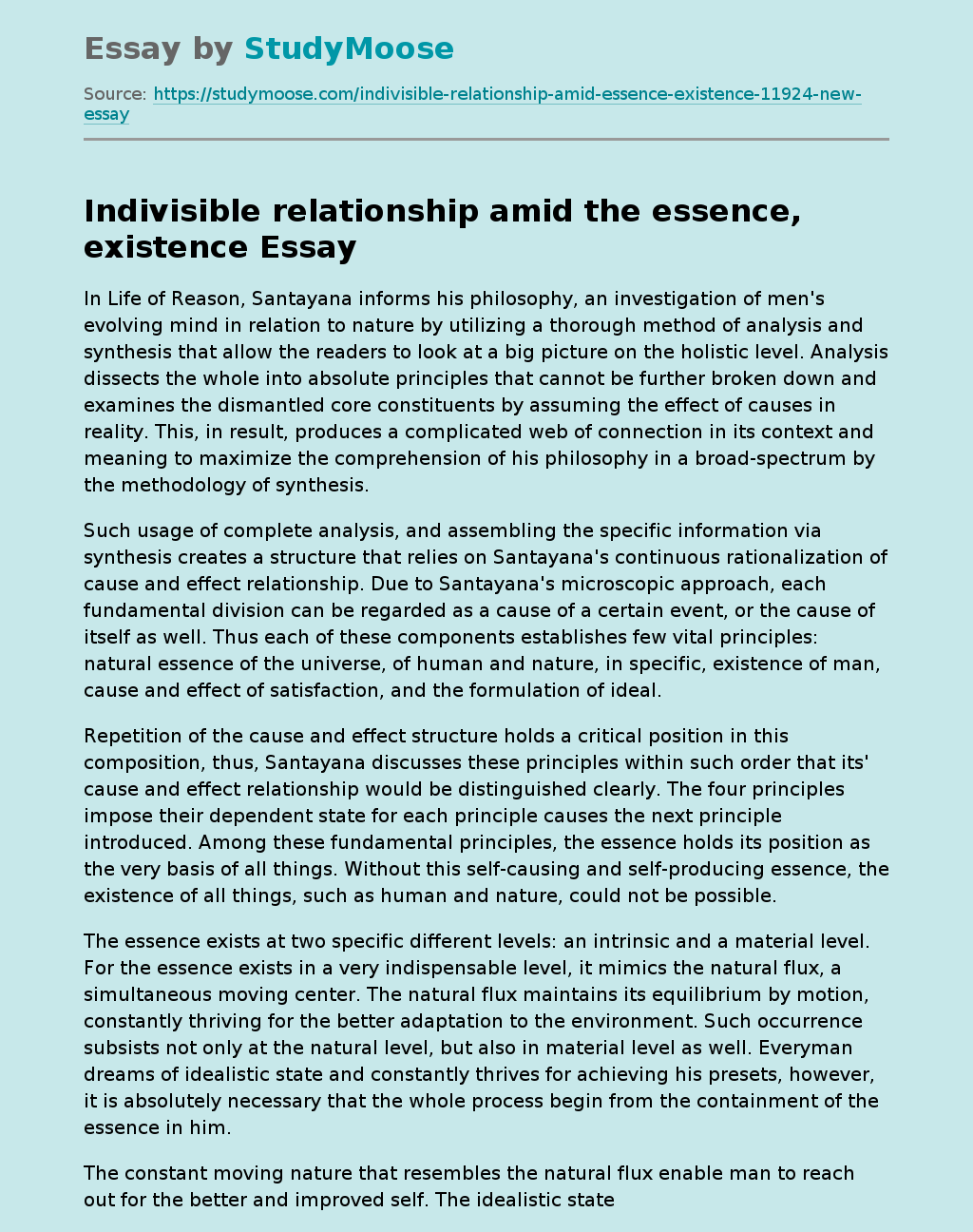