Religious experience is capable of different interpretations. It can be divided in to direct and indirect.

“Direct experience of the divine is a claim made by many individuals and is classically exemplified by those encounters with God described in the Bible. Indirect experience of the divine is said to be perceptible within ordinary experience and is held by some to depend on the development of a special faculty of apprehension or appreciation somewhat parallel to our capacity of appreciate art or music”. This understanding is the one we find expressed in writings of Friedrich Schleiermacher’s (1768-1834) an experience of absolute dependence, of the Infinite in contrast with our finitude.

Religious philosophy was prominent during this Christian era of the early 1800s. He attempted to balance reason and faith with the idea of the ‘creature consciousness’ of the individual. The sense of reverence one felt when contemplating the universe revealed an indescribable reality.

This ‘numinous’ experience betrayed a ‘feeling of absolute dependence’ upon a more powerful transcendent entity. Religion is not ethics but emotions. C.D. Broad (1887-1917) had the analogy, which proposes that if we imagine a race of begins in which all members were blind, but could walk about and touch things.

Suppose then that eventually a few individuals of this race developed the power of sight. All that they might tell their blind friends about colour would be wholly unintelligible and unverifiable by the latter. But the sighted of this race would be able to tell their friends about the things which the blind could verify themselves. This would not prove that the unintelligible statements about colour are true, but it would show that sighted people had a source of additional information that the blind people do not have. To Broad, it would not be unreasonable for the blind people to suppose that the statements the sighted persons made about things which could not be verified by the blind people, are true, due to this source of additional information. Broad uses this analogy to demonstrate that it is reasonable to suppose that religious experiences are actual and can base an argument upon these experiences.

For example Teresa of Avila was unable to describe what she saw during her mystical experience. The second point that the experience must be noetic meaning it must provided insights into unobtainable truths. The experience must also be transient meaning that the experience can last a lifetime for example seeing something like the Virgin Mary however the effects of this experience should last a lifetime but the actual sighting of the Virgin Mary shouldn’t. The last point James made was that the individual must feel a ‘loss of control’ to a more powerful being i.e. God. With these points William James obviously felt that both individual and corporate experiences were not fantasy and genuine to the person.

Albert Einstein said that “The fairest thing we can experience is the mysterious…a knowledge of the existence of something we cannot penetrate… it is this knowledge and his emotion that constitutes that truly religious attitude”. What Einstein said was closer to what Otto called the numinous, “Otto describes the central ‘feeling’ of the Mystical experience as a kind of “creature-feeling”. The Holy or numinous experience, an experience of a wholly other which evokes boundless awe & wonder & which entrances & captivates. Numinous is the presence of awesome power”.

The relation between individual experience and the life of groups can be seen in mysticism and in the Sufi movements. The individual experience, as well as the belonging to a group, is felt as being privileged, being a part of the religiously privileged few. We can study the processes of transmission of religious knowledge and experience, especially in the form of spiritual relationship between master and pupil.

Swinburne’s principles of credulity and testimony to test the validity of a religious experience,

Credulity is the ‘apparent perceptions ought to be taken at face value in the absence of positive reason for challenge.’ Testimony is ‘other things being equal we think that what others tell us they perceived probably happened.’

The religious story of Lourdes began on Thursday, February 11, 1858, when three girls, one of whom was the fourteen-year-old Bernadette Soubirous, went to collect wood along the shores of the river Gave. In the course of that outing Bernadette heard a noise and, looking up, saw a woman dressed in white and praying the rosary. Following that first apparition, Bernadette was to see her “beautiful Lady” 17 times more. However, it was not until the third appearance, on February 18th, that the Lady finally spoke to Bernadette and asked her to come to the grotto every day for two weeks. In return, if Bernadette did as she was asked, the Lady said that while she could not promise Bernadette happiness in this life, she could and would do so in the next. Bernadette followed the Lady’s direction and began to visit the grotto daily.As word of the story spread, crowds began to accompany Bernadette. In the course of these visits, the Lady revealed that she had come primarily to communicate a message of repentance and prayer for the conversion of sinners. Bernadette relayed this message, and others, to those who watched her mysterious conversations. On one occasion, the Lady instructed Bernadette to wash at the spring. There being no spring, Bernadette dug a small hole, and in the muddy water which appeared, washed herself. By the next day, an abundant spring of fresh water had begun to flow.

The Toronto Blessing started at the Toronto Airport Vineyard Church on January 20, 1994. Randy Clark, a Vineyard pastor from St. Louis, Missouri encountered Howard-Browne in Tulsa, Oklahoma and came under his influence. John Arnott, senior pastor of the Airport Vineyard Church had learned of these phenomenons and invited Clark to preach. To the great surprise of both, following the sermon people began to laugh hysterically, cry, leap, dance, and even roar as a result of what the church calls “a move of the Holy Spirit” Approximately 300,000 people have visited the church in Toronto. Millions have reportedly been affected from the spread of the movement to various places. While there is much concocted evidence of the spread of this movement, there is no certain way of empirically measuring the impact. However, it is clear that the move has had a tremendous impact.

Martin Buber (1878-1965) “Most lasting achievement was his philosophy of Dialogue, described in I and Thou (1923). In this treatise Buber differentiated between the I-Thou and I-It relationships. The former depicts the relationship between man and the world as one of mutuality, openness, and directness – a true dialogue. The latter – the I-It – is explained as the absence of these I-Thou qualities. The partners are not equal in the I-It relationship. However, the I-It dialogue cannot be discarded because it leads to objective knowledge, and must necessarily interact with I-Thou. Yet the ultimate objective is not only the I-Thou relationship between man and the world, but between man and the eternal source of the world, namely, God. God, Buber maintained, can be known through this subjective view of the universe. One can encounter God in the revelation of everyday existence. Indeed, Buber asserted that the Bible is a record of this dialogue experience between man and God. He stated that the essence of religious life is not the affirmation of religious beliefs but rather the way one meets the challenges of existence”. (http://www.emanuelnyc.org/bulletin/archive/34.html) 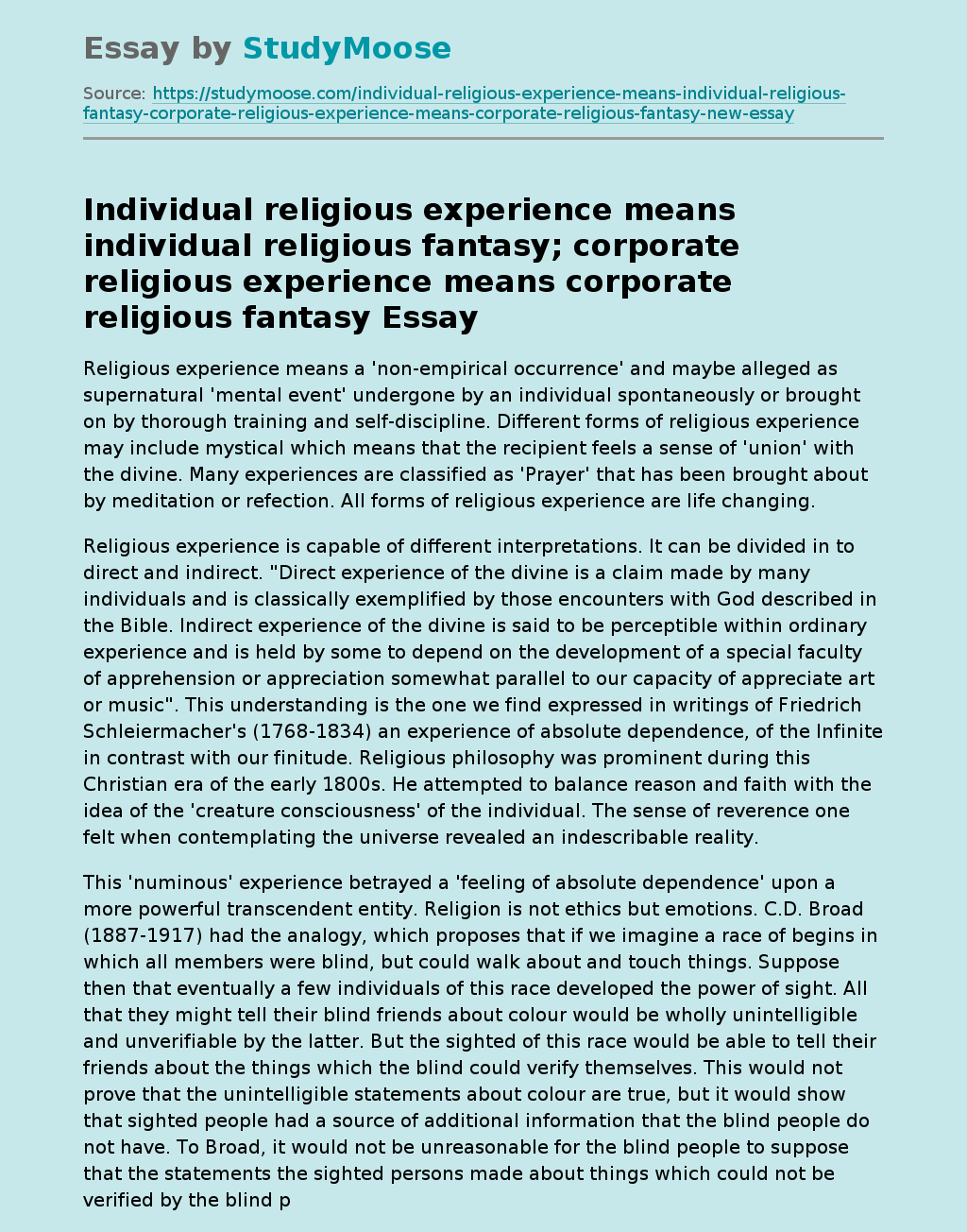