He was born on 22na of December 1887 in a small village of Tanjore district, Madras. He failed in English in Intermediate, so his formal studies were stopped but his self-study of mathematics continued. He sent a set of 120 theorems to Professor Hardy of Cambridge. As a result he invited Ramanujan to England. Ramanujan showed that any big number can be written as sum of not more than four prime numbers. He showed that how to divide the number into two or more squares or cubes.

Don't use plagiarized sources. Get your custom essay on
“ Indian Mathematicians ”
Get custom paper
NEW! smart matching with writer

When Mr .Litlewood came to see Ramanujan in taxi number 1729, Ramanujan said that 1729 is the smallest number which can be written in the form of sum of cubes of two numbers in two ways, i.e. 1729 = 93 + 103 = 13 + 123 since then the number 1729 is called Ramanujan’s number. In the third century B.C, Archimedes noted that the ratio of circumference of a circle to its diameter is constant. The ratio is now called ‘pi ( Π )’ (the 16th letter in the Greek alphabet series)

The largest numbers the Greeks and the Romans used were 106 whereas Hindus used numbers as big as 1053 with specific names as early as 5000 B.

C. during the Vedic period. Srinivasa Ramanujan Aiyangar was an Indian Mathematician who was born in Erode, India in 1887 on December 22. He was born into a family that was not very well to do. He went to school at the nearby place, Kumbakonam. Ramanujan is very well known for his efforts on continued fractions and series of hypergeometry. When Ramanujan was thirteen, he could work out Loney’s Trigonometry exercises without any help.

At the of fourteen, he was able to acquire the theorems of cosine and sine given by L. Euler. Synopsis of Elementary Results in Pure and Applied Mathematics by George Shoobridge Carr was reached by him in 1903. The book helped him a lot and opened new dimensions to him were opened which helped him introduce about 6,165 theorems for himself. As he had no proper and good books in his reach, he had to figure out on his own the solutions for all the questions. It was in this quest that he discovered many tremendous methods and new algebraic series

Aryabhatta was born in 476A.D in Kusumpur, India.
He was the first person to say that Earth is spherical and it revolves around the sun. He gave the formula (a + b)2 = a2 + b2 + 2ab
He taught the method of solving the following problems:

Aryabhata wrote many mathematical and astronomical treatises. His chief work was the ‘Ayrabhatiya’ which was a compilation of mathematics and astronomy. The name of this treatise was not given to it by Aryabhata but by later commentators. A disciple by him called the ‘Bhaskara’ names it ‘Ashmakatanra’ meaning ‘treatise from the Ashmaka’. This treatise is also referred to as ‘Ayra-shatas-ashta’ which translates to ‘Aryabhata’s 108’. This is a very literal name because the treatise did in fact consist of 108 verses.

It covers several branches of mathematics such as algebra, arithmetic, plane and spherical trigonometry. Also included in it are theories on continued fractions, sum of power series, sine tables and quadratic equations. Aryabhata worked on the place value system using letters to signify numbers and stating qualities. He also came up with an approximation of pi ( ) and area of a triangle. He introduced the concept of sine in his work called ‘Ardha-jya’ which is translated as ‘half-chord’. SHAKUNTALA DEVI

He was born in a village of Mysore district.
He was the first to give that any number divided by 0 gives infinity (00). He has written a lot about zero, surds, permutation and combination. He wrote, “The hundredth part of the circumference of a circle seems to be straight. Our earth is a big sphere and that’s why it appears to be flat.” He gave the formulae like sin(A ± B) = sinA.cosB ± cosA.sinB Niels Henrik Abel

born August 5, 1802, island of Finnøy, near Stavanger, Norway—died April 6, 1829, Froland), Norwegian mathematician, a pioneer in the development of several branches of modern mathematics. Abel’s father was a poor Lutheran minister who moved his family to the parish of Gjerstad, near the town of Risør in southeast Norway, soon after Niels Henrik was born. In 1815 Niels entered the cathedral school in Oslo, where his mathematical talent was recognized in 1817 with the arrival of a new mathematics teacher, Bernt Michael Holmboe, who introduced him to the classics in mathematical literature and proposed original problems for him to solve. Abel studied the mathematical works of the 17th-century Englishman Sir Isaac Newton, the 18th-century German Leonhard Euler, and his contemporaries the Frenchman Joseph-Louis Lagrange and the German Carl Friedrich Gauss in preparation for his own research.

Abel’s father died in 1820, leaving the family in straitened circumstances, but Holmboe contributed and raised funds that enabled Abel to enter the University of Christiania (Oslo) in 1821. Abel obtained a preliminary degree from the university in 1822 and continued his studies independently with further subsidies obtained by Holmboe. Abel’s first papers, published in 1823, were on functional equations and integrals; he was the first person to formulate and solve an integral equation. His friends urged the Norwegian government to grant him a fellowship for study in Germany and France. In 1824, while waiting for a royal decree to be issued, he published at his own expense his proof of the impossibility of solving algebraically the general equation of the fifth degree, which he hoped would bring him recognition.

He sent the pamphlet to Gauss, who dismissed it, failing to recognize that the famous problem had indeed been settled. Abel spent the winter of 1825–26 with Norwegian friends in Berlin, where he met August Leopold Crelle, civil engineer and self-taught enthusiast of mathematics, who became his close friend and mentor. With Abel’s warm encouragement, Crelle founded the Journal für die reine und angewandte Mathematik (“Journal for Pure and Applied Mathematics”), commonly known as Crelle’s Journal. The first volume (1826) contains papers by Abel, including a more elaborate version of his work on the quintic equation. Other papers dealt with equation theory, calculus, and theoretical mechanics. Later volumes presented Abel’s theory of elliptic functions, which are complex functions (see complex number) that generalize the usual trigonometric functions. In 1826 Abel went to Paris, then the world centre for mathematics, where he called on the foremost mathematicians and completed a major paper on the theory of integrals of algebraic functions.

His central result, known as Abel’s theorem, is the basis for the later theory of Abelian integrals and Abelian functions, a generalization of elliptic function theory to functions of several variables. However, Abel’s visit to Paris was unsuccessful in securing him an appointment, and the memoir he submitted to the French Academy of Sciences was lost. Abel returned to Norway heavily in debt and suffering from tuberculosis. He subsisted by tutoring, supplemented by a small grant from the University of Christiania and, beginning in 1828, by a temporary teaching position. His poverty and ill health did not decrease his production; he wrote a great number of papers during this period, principally on equation theory and elliptic functions. Among them are the theory of polynomial equations with Abelian groups.

He rapidly developed the theory of elliptic functions in competition with the German Carl Gustav Jacobi. By this time Abel’s fame had spread to all mathematical centres, and strong efforts were made to secure a suitable position for him by a group from the French Academy, who addressed King Bernadotte of Norway-Sweden; Crelle also worked to secure a professorship for him in Berlin. In the fall of 1828 Abel became seriously ill, and his condition deteriorated on a sled trip at Christmastime to visit his fiancée at Froland, where he died. The French Academy published his memoir in 1841. 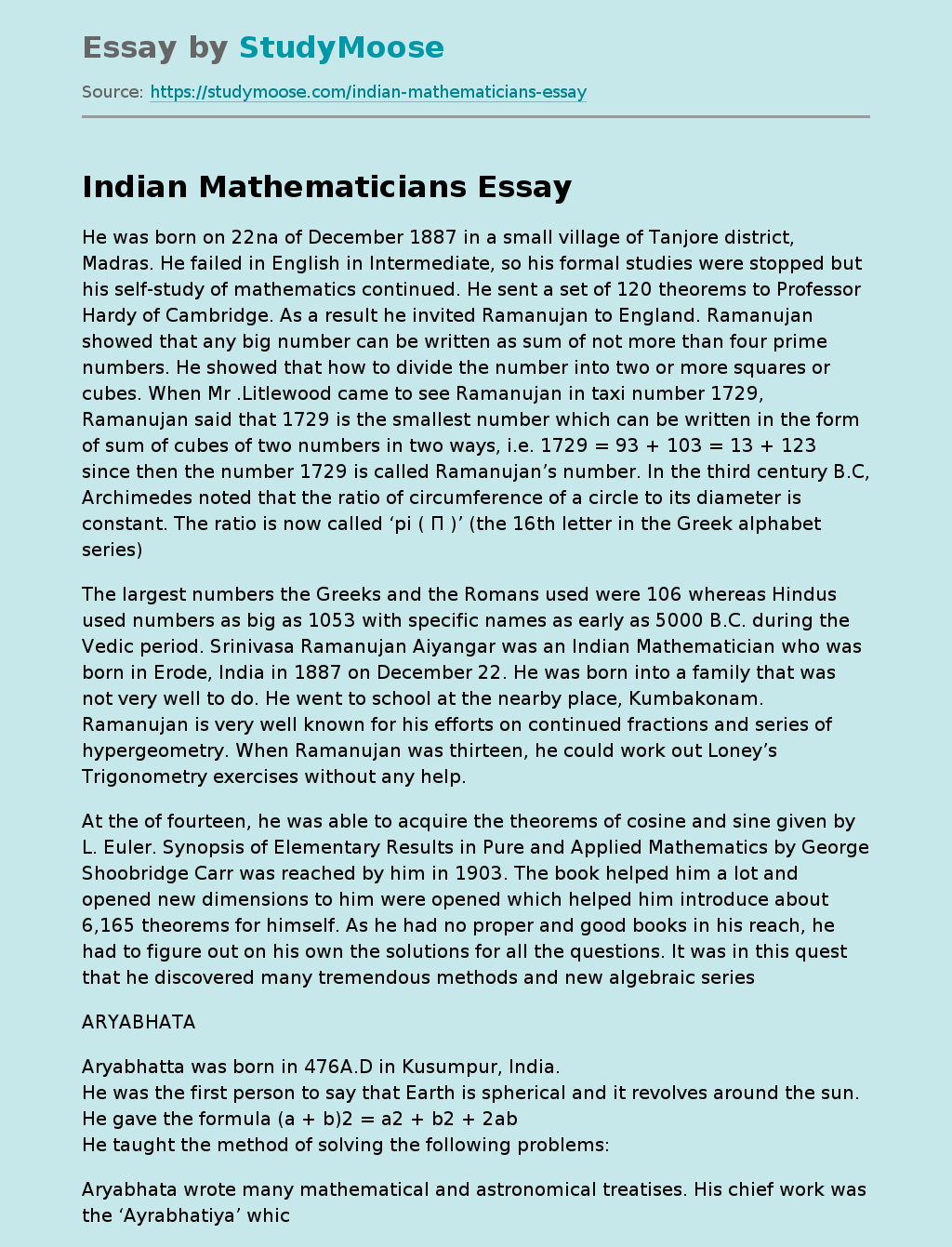