India of my dreams

Today, India is characterised by communal violence, religious strife, terrorist movements, regional alienation, political chaos, constant economic hick-ups, general corruption, Mafia raj, bomb-culture, etc. The great India of Lord Buddha, Mahavir, Shankaracharya, Swam Vivekananda, Mahatma Gandhi, and Jawaharlal Nehru is on the verge of break-up, unless of course, we put an end to these malaises that are eating into its very fabric. The ills of decadence, hibernation, disharmony and the lethargic existence of the nation must be addressed to, if we want to see a glorious and a vibrant India.

Don't use plagiarized sources.
Get Your Custom Essay on India of my dreams Just from $13,9/Page

I dream of such a glorious and wonderful India in the days to come.

India is a multicultural, multi religious, multilingual nation and, hence, in order to maintain peace and harmony, due importance has to be given to the sentiments of each community. However, this secularing and pluralism have come to be subdued by religious fanaticism and communalism. In the name of construction of temples and mosques we do not seem to hesitate even to take the lives of our neighbours.

Today, when we should be focusing on the country’s all-round development, our attention is focused in untangling the mess known as the ‘Ayodhya tussle.’

This undue importance given to religion has ruined our national peace, social equilibrium and international standing. Mumbai bomb explosion, Gujarat violence, Godhra incident, continuous Kashmir carnage, etc., speak volumes about how we have managed to turn the land of peace into a land of blood. Therefore, my dream of India is an India where religion would no longer be in national focus, where religion would be put into the backyard meant purely for personal practice. I dream of a day when people in India would live and die for their motherland than for their religion.

Today, in India, the gap between the have’s and the have- not’s is ever increasing. Nearly 90% of India’s wealth is in the hands of 10% of people. The current social discrimination based on birth, caste and religion is breaking the national fabric. In my future India there would be no more concepts such as, Reservation, OBCs, Backward classes, under-privileged, etc. These man-made boundaries of demarcations would be broken down 21st century India would an India where everyone, irrespective of caste, creed, and religion, would have equal opportunities to live and work.

Every village would be connected by roads and by internet. The country’s military expenditure would be minimised and maximum would be spent for social improvements. Green revolution, white revolution and IT revolution, etc. would characterise our land.

In my India of 21st century, the present evils characterising the Indian political system of India such as instability, rampant corruption, political scams, misuse of public money, glorification of leaders, horse-trading, criminalisation of politics, manipulation of election process, etc., would be unheard of.

My future India would have a political system, where person with dubious character or criminal background can never assume any public office, where election would no longer be based on money power or muscle power but rather totally free and fair.

My India of 21st century would be a great India highly esteemed by the other nations of the world. She would be a permanent member of the UN Security Council and her voice would be heard ‘loud and clear’ in the International arena. India’s role as the torchbearer of peace would be highly appreciated.

The Kashmir problem would be a thing of the past and she would have peace and friendship with all her neighbours. She would be considered a major Asian power at par with China and a highly developed nation with a world of IT professionals who are ready to venture out into the unknown frontiers.

I do not think that my dream of India is too idealistic or too unrealistic. A day is not far off when I would be fortunate enough to see this glorious India sparkling with the noble ideals of peace, high economic standards, political stability, social harmony, international recognition, etc.

Let my country awake from its present slumber and rise up to great heights of glory and prosperity. It would be an India like the India which the great patriot Rabindranath Tagore visualised: “Where the mind is without fear and the head is held high, where knowledge is free, where the world is not been broken up into fragments by narrow domestic walls”.

India of my dreams. (2016, Apr 11). Retrieved from https://studymoose.com/india-of-my-dreams-essay 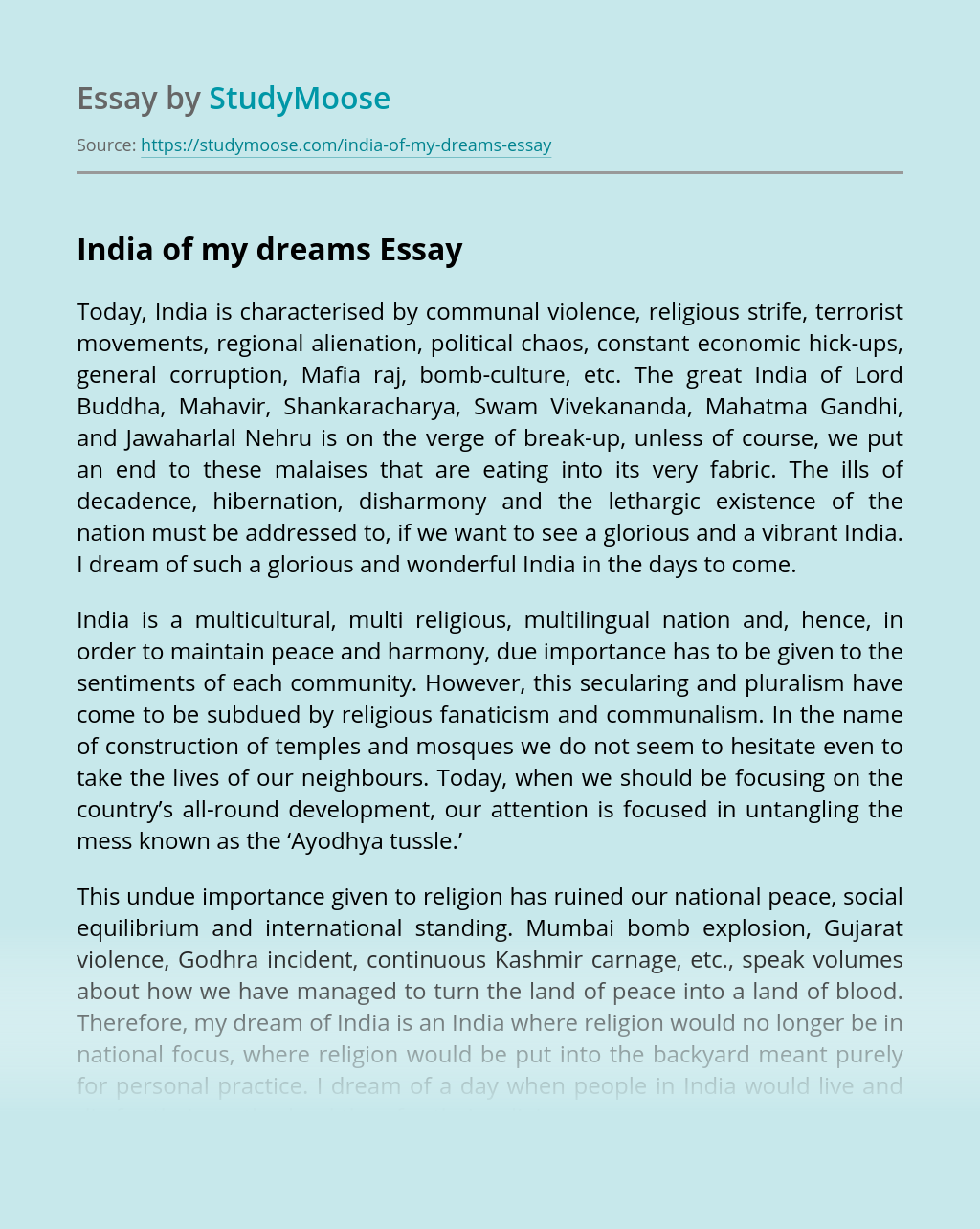 1.Explain what is meant by- Diversity Diversity can be defined as differences in mental capabilities, personal appearance, race, heritage, beliefs etc. Understanding that everyone is an individual and everyone has different needs.In the care setting i work in, clients have their own personal experiences and preferences, e.g food and activities, different attitudes, behaviour patterns. for...

Untouchability is a form of discrimination, the social-religious practice of ostracizing a minority group by segregating them from the mainstream by social custom or legal mandate. It is a menace and social evil associated with traditional Hindu society. The term is used in India to talk about the public treatment of especially the Dalit communities,...

Racial discrimination has long been an issue especially in the United States which is considered as a melting pot of different people from different ethnic and cultural backgrounds. Black people have experienced extreme even radical form of discrimination for centuries, but now, the black people found an ally in the affirmative action policy. This policy,...

Discrimination in Canada in the 1920s

In the 1920s politicians and leading Canadians took an active role in discriminating against all ethnic groups other than white Anglo-Saxons. They achieved this by feeding the dark side of humanity: fear of different cultures, prejudice and xenophobia. In the 1920s Canada treated different peoples unjustly. The Chinese were faced with ridiculous laws, the Native...