India being a strong democratic country doesn’t really need a dictator. It may just lead to disruption. India is a big country. People live in harmony and are known for their unity. A dictator may not be able to maintain this. Few people may again misunderstand dictatorship and may think it defies the purpose of freedom. Dictatorship may bring very short term changes. A country needs a strong government. Dictatorship may introduce communal differences depending on the community of the dictator.

Don't use plagiarized sources. Get your custom essay on
“ India needs leadership ”
Get custom paper
NEW! smart matching with writer

Human rights can be certainly bypassed.

It may lead to disorganization and malfunctioning of the law and order system of the country. For
A dictator can easily help us get rid of the dirt in politics. A very small community of people actually understands the meaning of democracy and don’t make misuse of it. For over decades, India is trying to get rid of poverty, may be, a dictator can help in this aspect. A dictator can help the citizens realize the meaning of democracy and freedom.

Discussion board
though Dictatorship may banish dirty politics and corruption from india, I think that choosing is a dictator will end the right to speak ability which evrey indian has!! peole may lost democracy.

. and ultimately dictatorship will give born to another hitlar or gaddafi or saddam where human right is was snatched. So india will be a heaven of silence. . India needs strong dictator

India doesn’t need a dictator but, it certainly need a strong democratic alliance, which can take some tough decision on the problems which are rising in India. India need a group of people who are not afraid to take some strict actions and go against the law if necessary to bring some
fruitful result. For example bihar , UP etc. are under lots of terrorism so if there is a good government which can take some measure to curb the corruption and terrorism then we don’t require a dictator.

Democracy should be above all the law, for example they should pass the LOKPAL which is being supported by democracy then lots of things can be done, but the government and the people in the parliament are not strong enough to see the viewpoint and not ready to make changes. India needs a strong dictator

There are various opinions of one but do we really want to go the middle east way? Do we really want another Gaddafi or Bashar amidst us? Democracy prevents wars from happening, promotes nThere are two kinds of reasons why India doesn’t need a dictator: strategic, and ethical. First strategic.

Against-
In a democratic country like India, divided into various layers and clusters based on caste, religion, gender, region, ethnic and other basis, democracy is a great leveler because of two reasons: each person’s value is one (as a vote) and secondly, most people feel that they have a stake in this system, particularly those who vote, and we have very high voting percentages across the world for democratic nations for our elections, particularThe only thing is whether they will justify it or like Thackeray, proudly say they did the wrong thing and ask others to challenge it if they dare to.

When Indian people feel they have no stake in a system (they really won’t have a stake, because there is no MLA or MP they can go to in case the bureaucracy strikes at their rights), they will take to protest. A dictator will not allow non-violent protests most certainly, so they will take to violent protests someday. That will only mean violence and secession. India’s experience shows us that it is extension of democracy which solves our problems, be it in Mizoram or to an extent now in Assam, not dictatorship or army rule as seen in Kashmir.

If India had a dictatorship earlier during the time of independence, states like Tamil Nadu and Assam as well as North-East would have done all to secede somehow. Thankfully, because democracy was there and Nehru believed
strongly in it, we accommodated regional aspirations and that is why those issues were solved. And our issues can only be resolved in this way.

I agree that a dictator can take decisions quickly, and democracy is always messy, not just in India but in general anywhere. But development is nothing without equity, because development is for whom? Human beings. And it should be for all. Those who have no stake in such development will engage in violence sooner or later.ly at local and provincial levels.

Once you introduce dictatorship, let’s face it, the dictator will have a certain identity and do things as he/she likes. Indira Gandhi is a good example. It’s good in theory to think of benign dictators, but no dictator has ever been benign in the world, and no one can guarantee that someone will be a benign dictator.

Even Manmohan Singh, the most soft-spoken of Indian politicians will not be a benign dictator, forget anyone else. Dictators will relish the power they have and soon use it to do wrongon aggression and freedom of expression. A country like India needs a democratic government which can work together as a unit to unite people around them which would in return help the country to develop. And it’s their right to have such stake, every human’s right. So democracy will be messy when it takes into consideration every human’s right in each and every development issue.

But that equity in taking decisions is as much important as the decision itself. That is democracy. We have to accept it. It can’t be one man show or one party show. It has to be every person engaged in the decision. For-

As a common man i am ashamed to the stinking, shamelessly twisted ,grossly illogical and unimaginable twisting of democracy has taken this nation to. so called leaders who are better off cleaning ditches are rolling on the dirt of corruption, greed and power with their deaths no where in sight

Ok lets VOTE for change! Hell no Its voting for ONE ‘dirty excuse of a human being’ or the Other filthy B–t-rd

What India needs a strong and well minded dictator (No Idi-amins) who will rebuild the nation execute/exile for ever(a hidden secret Guantanamo bay) the corrupted-septic-infected politicians ranging from Kerala to Kashmir and rule wisely till India matures to be democracy or till no descendants of filthy politicians remain.

What will it take to overcome India of its worst-in-the-world-corruption , its antique and grossly inefficient government ,judiciary & worst of all politicians who still ravage the nation….Any such movement i am ready to participate as a true patriot to the nation….I CARE but i don’t know how i can make a difference….we need a revolution and strong dictator (No maoists please)…..Will there be a way ..is there a leader who we can support ……one among the clean poiticians who will have the guts……help us pls

Its a scream for help from a helpless citizen…….looking for a way to liberate his fellow Indians from the satanical clutch India is in….help us…help us help us patriots waiting to serve the nation For-

It’s been more than sixty-five years since India achieved independence. The effort, toil, blood and passion of our respected freedom fighters gave us the India of today. It was their ultimate dream to craft a nation whose members were free and an integral part of the country’s decision making. The Indian democracy with its much detailed Constitution was a result of their dream. Sixty-five years on, India might be free and those running the nation might be the elected representatives of the masses, but India continues to be plagued by the same old problems of poverty, economic inequality,
illiteracy, population, widespread corruption and the same old socio-economic issues. It is perhaps the time of an able, strong-minded, powerful dictator to take hold of the country and cleanse the entire system. Here is a look at 10 reasons why this might prove effective for the country:- • Dictatorship will breed development though straightforward decision making:

A dictator being the all powerful head of the state will face no opposition from other parties as in a democracy. He will thus have complete freedom to execute his decisions which might breed development. • Better control the variables of human development: One of the biggest examples is China (a Communist country) where the population has been brought under control by the government, through the one-child norm policy which is virtually impossible in the Indian democracy. • Dictatorship is a more economic institution: In a country like India where poverty is a lingering problem, it is but a luxury to spend lakhs on a single election. Dictatorship is thus a far more economic institution. • Dictatorships regimes can be a path for countries to move on from civil wars and focus on development:

China can be used as an example yet again, as the country has been almost absolutely insulated from wars and terrorist attacks. • Dictatorships have flexibility in economic policy that breeds growth: Democracy can often stagnate economic development. An example is West Bengal where the Tata group could not establish their factory in Singur due to stiff resistance from the opposition party in the government. • Dictatorship helps achieve social stability: Yes it does. • The longer lasting and biggest economic miracles have occurred under dictatorships : An example is Hitler’s reign in Germany. “The Nazis came to power in Germany in 1933, at a time when its economy was in total collapse, with ruinous war-reparation obligations and zero prospects for foreign investment or credit.

Yet through an independent monetary policy of sovereign credit and a full-employment public-works program, the Third Reich was able to turn a bankrupt Germany, stripped of overseas colonies it could exploit, into the strongest economy in Europe within four years, even before armament spending began.” • Dictatorship breeds order: In a country like India where law and order is disrupted time and again, dictatorship is definitely going to help out.

Even in the 21st century Indian women are vulnerable and rape and molestation cases are reported throughout the country from upscale Delhi to the remote villages of Burdwan. India needs a really strong leader who can make the country safe enough for our women to move around fearlessly, with their heads held high. • Dictators have incentives to promote development and diminish social differences: A lot of readers might still be optimistic enough to feel that democracy will spell better days for India, but as a youth frustrated with the current situation of my country I feel that we really need a change and dictatorship may just be the way out for a better, brighter India. 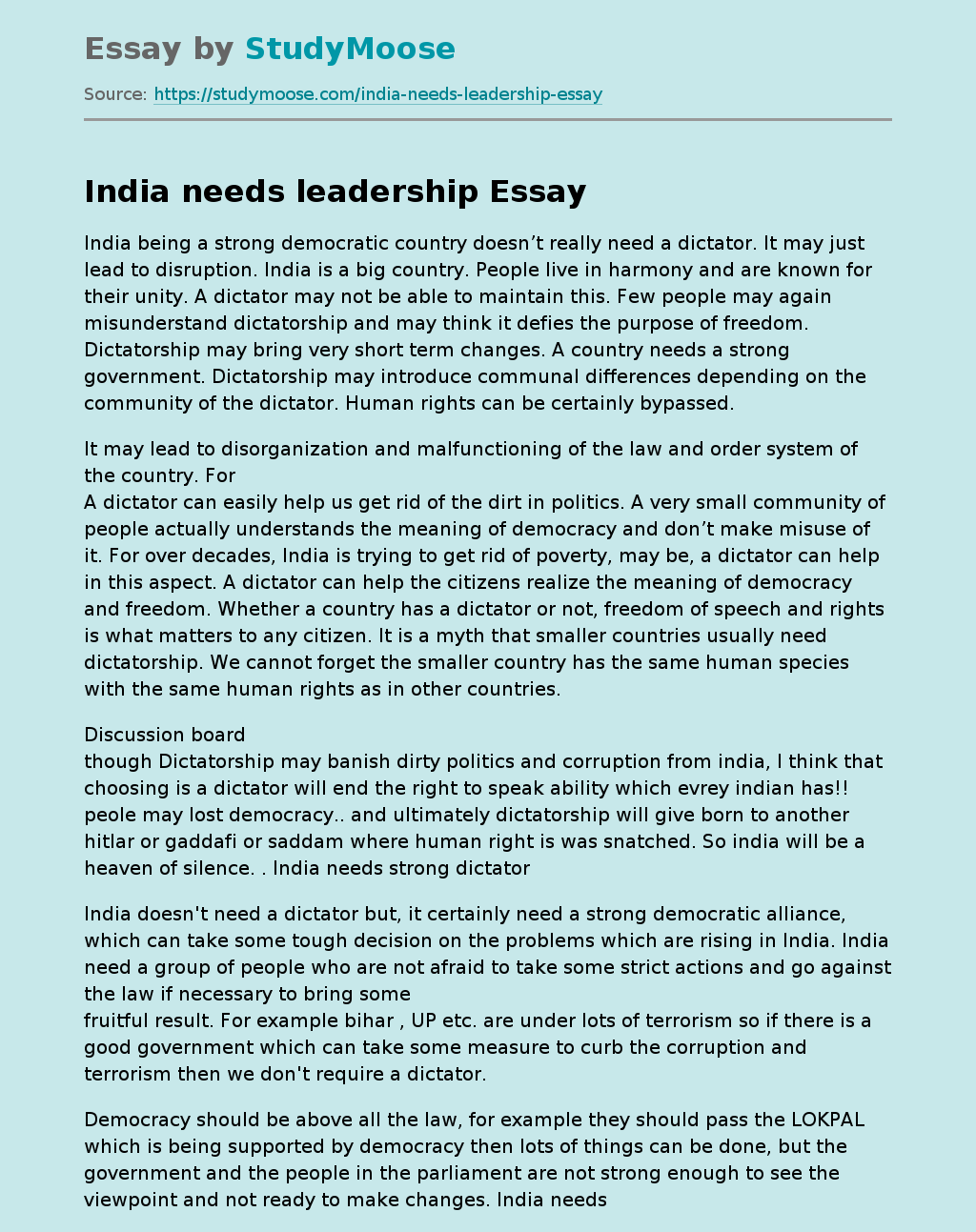