Due to the end of slavery, the demand for cheap labor in the Americas partnered with multiple peoples willing to leave their home countries to create an influx of indentured servants. These unfortunates, though seeking a better life, often ended up facing awful conditions for the duration of their contract.

Document three shows the beginnings of indentured servitude, in a way. This document, a map, shows where all the indentured servants came from, with the two most prominent locations being China and India.

Don't use plagiarized sources. Get your custom essay on
“ Indentured Servitude in History ”
Get custom paper
NEW! smart matching with writer

Most of them ended up somewhere in the Caribbean, likely to raise cash crops like sugar. There is also a noticeable lack of indentured servants from European countries. This may be due to Europeans being the main ones who hired these servants, and they may not have had their fellow countrymen sign such a contract. It also may be due to racism; all the countries are either Asian or African, places where whites would be few and far between.

Document four supports these ideas, with the only origin points the document notes are China, India, and Japan, with over a million indentured servants flowing into the Americas (or South Africa) in this time, most of whom came from India.

Document six, another chart, shows how slavery and indentured servitude is related. In the early to mid-eighteen hundreds, the amount of former slaves steadily declined, as more and more indentured servants, specifically Indians, came into the country, rising from barely over a thousand in 1835 to almost eighty thousand by 1851, an eight thousand percent increase in just sixteen years. Document eight shows the life of an indentured servant.

This document is written in a very “oh, woe is me” manner, the writer complaining about how terrible his life is. Then again, if I worked fifteen hour days without food breaks, I’d be pretty upset too. While he may be exaggerating to make his plight seem more dire to the Protector of Immigrants, document seven shows that he may have a legitimate point. While this may not be the contract Ramana signed, I feel it’s safe to assume most of the contracts would be similar to this one, with Sundays off and only seven to ten hours of work on the other days. The document also specifically mentions the pay for those in servitude, with one shilling to grown men, and 2/3 of a shilling to women and minors. While I don’t know how much a shilling is worth, seeing as the servants get shelter, medicine, and three months of rations from whoever hired them, it stands to reason that they would be able to have enough coinage to be able to support themselves.

Document five seems to support document eight though, with a European supervisor commanding Indian servants. This image makes indentured servitude look incredibly similar to slavery, especially due to the whip help in the supervisor’s hand. However, this treatment didn’t stop the flood of available immigrants; the same document shows over fifty newly arrived Indians, ready to start their lives in the New World. The final two documents, numbers one and two, show the British take on indentured servitude. Document one defends the idea of slavery, with the author stating that while it isn’t the best route for immigrants, it isn’t nearly as bad as slavery. He goes on to compare it to military service, basically saying that the servants are trained specifically to do their jobs. However, as a prominent British member of Britain’s colonies, it is likely that he owns or profits from indentured servants in some way. He wouldn’t speak out against it if it’s making him money.

Document two is considerably more blunt, speaking of the need for foreign labor to turn a profit. The writer of this document seems to believe he’s far above indentured servants, as he talks of them as nothing more than resources, not actual people. He goes on to say how they’ll need more of servants as time goes on. The dispassionate and unattached way he speaks of the servants is profound; in fact, it’s almost as if he’s talking about how much coal one would need to keep a factory running. One missing document I would’ve liked would be from a former indentured servant, five to ten years after he was released from his contract. It would be interesting to see how they did in the New World once they were free. Another document I would’ve liked is one from one of the ship captains who transport the servants, comparing life he saw in their home countries to the lives they’d experience in their new homes. 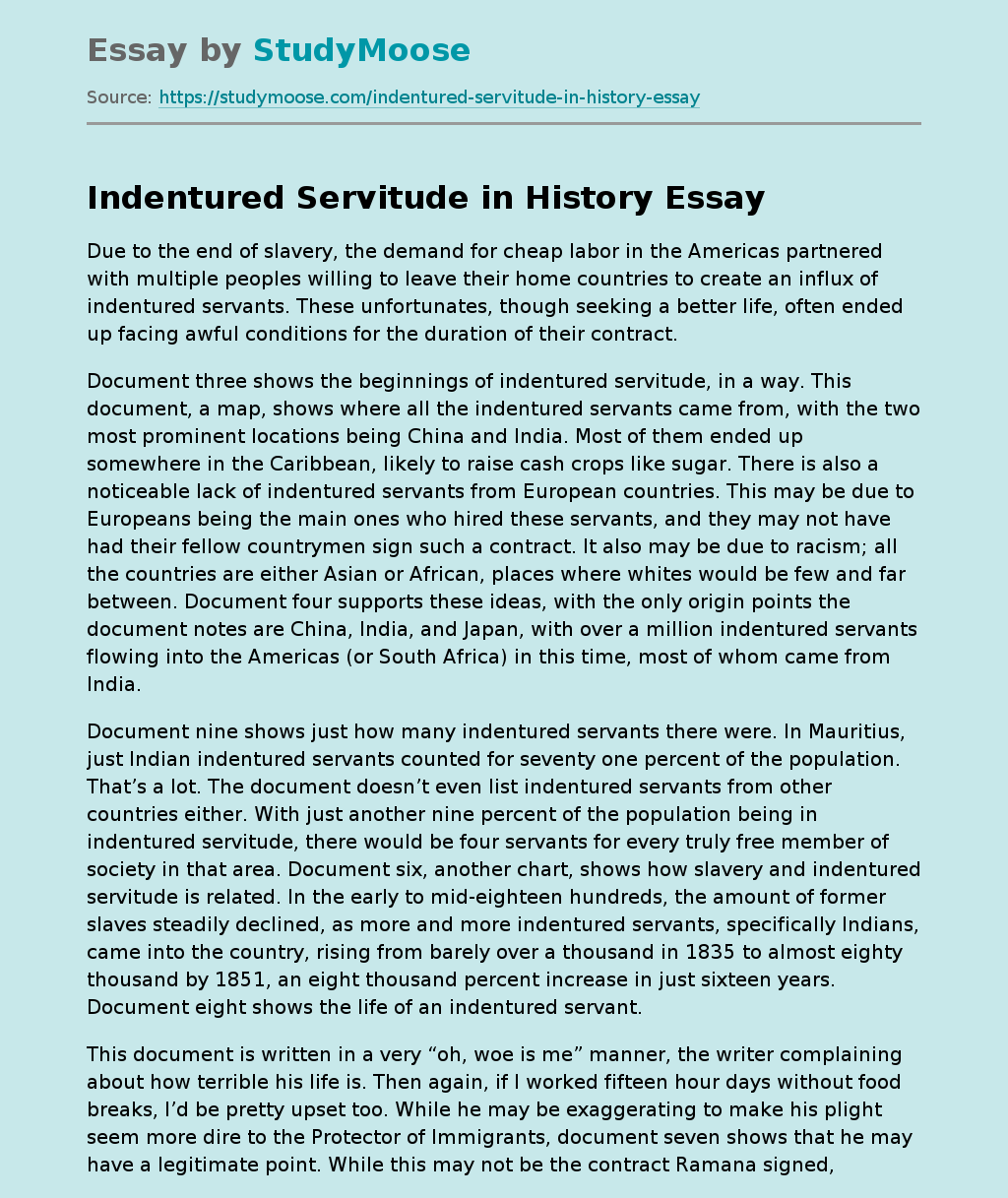