Increasing Number of Out of School Youth

Out of school youth are the helpless people who have needs. Nobody can deny that the facts of education are the most important thing or factor for some people to bring change in their lives. It has been recognized as the most prevailing gearing-up the socio-economic development of our government or our nation.

The percentage of children enrolled in the 2006-2007 school year primary school was down to 83% from 90% seven years ago, according to National Coordination on Board by Agency France Pressed(AFP) And also this 2012 the numbers of out of school for secondary education getting worse.

Turn in your highest-quality paper
Get a qualified writer to help you with
“ Increasing Number of Out of School Youth ”
Get high-quality paper
NEW! AI matching with writers

Education is the great equalizer that will give all Filipinos rich or poor, the chance to uplift their lives and face a secure future. One in six-school-age children in the Philippines are being deprived of education and the number is raising steadily a study by the National Statistical Coordination Board (NSCB) showed 4 years ago. And also the number of six-year-old children who are not in Grade I reached 1.

207 million and have 3.8 million school-aged children who likely have not attended school.

The 2003 Functional Literacy, Education and Mass Media Survey or (FLEMMS) conducted by the National Statistics Office (NSO) every 5 years cited 11.6 million Filipinos aged 10-24 are not attending school. The NSCB said the number of Filipino children who did not have access to primary education worsened to 16.8 % of school-age population in the school year ending 2007 from 15.6 % the previous year because of the rising cost of living. And the latest number of children who did not have access to elementary education was even worse compared with the 9.

Out of the 17 regions of the country Western Visa as was the worst performer. In the region 25% of children ages 6-11 years old were not going to elementary school. Most Filipinos read and write and young Filipinos are better educated than their parents and most of their Asian neighbours. But still the average Filipino has only a 5th grade education. Almost every child gets to see the inside of a school, but not nearly enough of them stay long enough to get the education needed in an advancing economy.

Increasing Number of Out of School Youth. (2016, Nov 02). Retrieved from http://studymoose.com/increasing-number-of-out-of-school-youth-essay 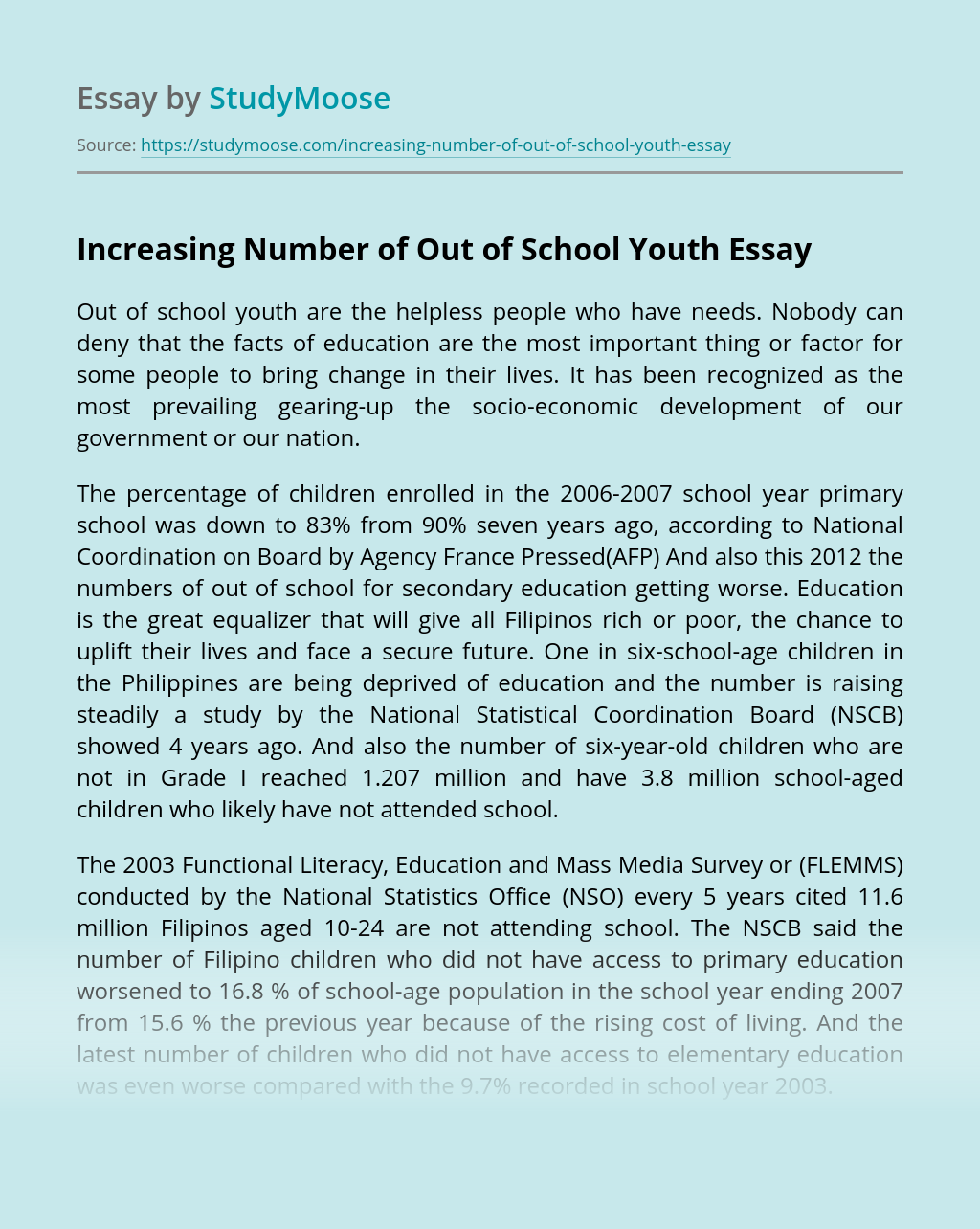 Turn in your highest-quality paper
Get a qualified writer to help you with
“ Increasing Number of Out of School Youth ”
Get high-quality paper
Helping students since 2015
Stay Safe, Stay Original