In this article, the author discussed about the people power in which it can extend the benefits further to the countries in many different aspects and angles such as how good education and health condition can contribute to the economic growth of a country and so on. As we are living in the era of modernization, most of the countries are working hard to ensure that they can produce as much talented citizens as possible which can contribute to the growth of the nation.

Don't use plagiarized sources. Get your custom essay on
“ In this article the author discussed about the people power in which ”
Get custom paper
NEW! smart matching with writer

As we can see from Diagram 3, the percentage of tertiary graduates in Cambodia is only 0.5 percent. This is due to low living standards in that country that forces the nations to work since young. Besides, majority of the Cambodians are also self-employed or joined the informal sectors specifically working in the family businesses. While the working positions that been paid can only be found in certain sectors such as in garment, tourism, construction and the others, which make the employment in formal sector is substantially lower.

This is why, the Cambodians remains poor and unstable in term of the livelihoods. The major impact can also be seen when the growth is not well shared among Cambodian people and the poverty rate is still high. With regard to that, the issue of child labour in Cambodia should be put into a serious attention to ensure the opportunity of the child receiving a proper and complete education, in which at the end can mould their talent and contribute more to the economic growth of the country. In contrast, Singapore have the largest employment share of high-skilled workers because it endeavours few reforms which related to educational policy when it realized the proliferating demand of technical talents. Ever since the last decades, many meticulous and comprehensive struggles had been carried out to ensure the internationalization of Singapore’s tertiary education and also in order to burgeon Singapore as a Global Schoolhouse’. Thus, this active participation of skilled or talent workers in the labour force had contribute to the growth of income as it accelerate the productivity of the nation. While Vietnam possesses the highest low-skilled employment share which is 41% since the tertiary education is not up to the standards of the corporate demand, and unfortunately even the skilled workers are not able to fulfil the requirements of their jobs. This can be seen from Diagram 4 when there is only 5 percent of Vietnamese graduates from tertiary education out of overall population. In addition, Vietnam fails to compete with Singapore, Indonesia, Thailand and Malaysia because of other few reasons such as weak English proficiency, low standards of problem solving and critical thinking or known as cognitive skills, lack of work discipline and the others. Besides, it has also been mentioned in the article that healthier citizens can contribute to a larger economic return as they become more productive. This is because, they don’t lose too much working time due to any sort of illness that requires a longer period of healing. Moreover, a good health is also necessary for the cognitive development of a child, hence it will increase the returns to investment in schooling. The circulation of wealth and savings can also be continued efficiently when the person have a longer lifespan. This is because when a person falls sick or having any diseases, he needs to take a certain amount of his saving to get a medical treatment. Therefore, the money is no longer available for him to invest in somewhere else which can help to accelerate the income of his country. It can be observed from Diagram 4 that the infant mortality rate of Singapore is the lowest since year 1990 until year 2015. In year 2015, Singapore stated only 2 percent of infant mortality rate, if compared with Lao PDR which have the highest infant mortality rate of 57 percent. Having a good and excellent child as well as maternal health services and childhood diseases programs had been among contributory factor of the Singaporean’s high life span or longevity. While different from Lao PDR, the infant mortality rate is very high because of few severe reasons such as the poor access to mother and child healthcare services (MCH). This is due to the low standard living of the nations and also the economic burden that they are facing. Besides, the quality of MCH itself had also been a major concern, including the poor standard of MCH routine services, low management capability and also lack of human resources for MCH. Meanwhile Brunei Darussalam, Malaysia and Thailand were doing quite well in terms of having low infant mortality rate since year 1990 to year 2015.The visible handRealizing that human capital can positively generate or improve the income of the country, there must be authorities who are responsible to carry out or organized the incentives in increasing the human capital. Indeed, the state must aware how important it is to invest in human capital. This is because, human capital must be developed or nurtured by the state as it cannot eventuate or aspire by itself, as what had been mentioned by the author in the article. For example, the Royal Government of Cambodia (RGC) also aiming a few goals and targets such as to achieve universal primary education by planning the easier access to education, increasing the education’s quality and also enhancing the technical and vocational education. While, with regards to health, RGC will also expanding the vaccination against measles and tetanus, increasing the coverage of children delivery by professional mid-wives, new-born baby care services and many more in order to improve the quality of maternal, infant and children healthcare services. In addition, in the case of Indonesia, the government also take some initiative to improve the human capital in terms of education and health. For instance, the Basic Literacy Education had been conducted to reduce the illiteracy rate among adults. Moreover, the government also make a step in financing the antenatal care, birth delivery care as well as postpartum care by launching the Birth Delivery Guarantee program (Jampersal) in 2011. Meanwhile, in Brunei Darussalam, all children are obliged or compulsory to attend at least nine years of formal schooling under the Compulsory Education Order 2007. Besides, the government also trying to achieve universal primary education by provides free education for one year of pre-school, six years of primary school and few others more including the vocational training school, under the introduction of the National Education Policy. With regard to child mortality, a strict and firm pro-life policy has been conducted which highlight that when there is a severe need for saving a woman’s life, then only abortion is allowable and legal. Plus, they also fortify and assure a comprehensive access of healthcare to all people such as universal coverage of parental care under the Maternal and Child Health (MCH) programs.

In this article the author discussed about the people power in which. (2019, Aug 20). Retrieved from https://studymoose.com/in-this-article-the-author-discussed-about-the-people-power-in-which-essay 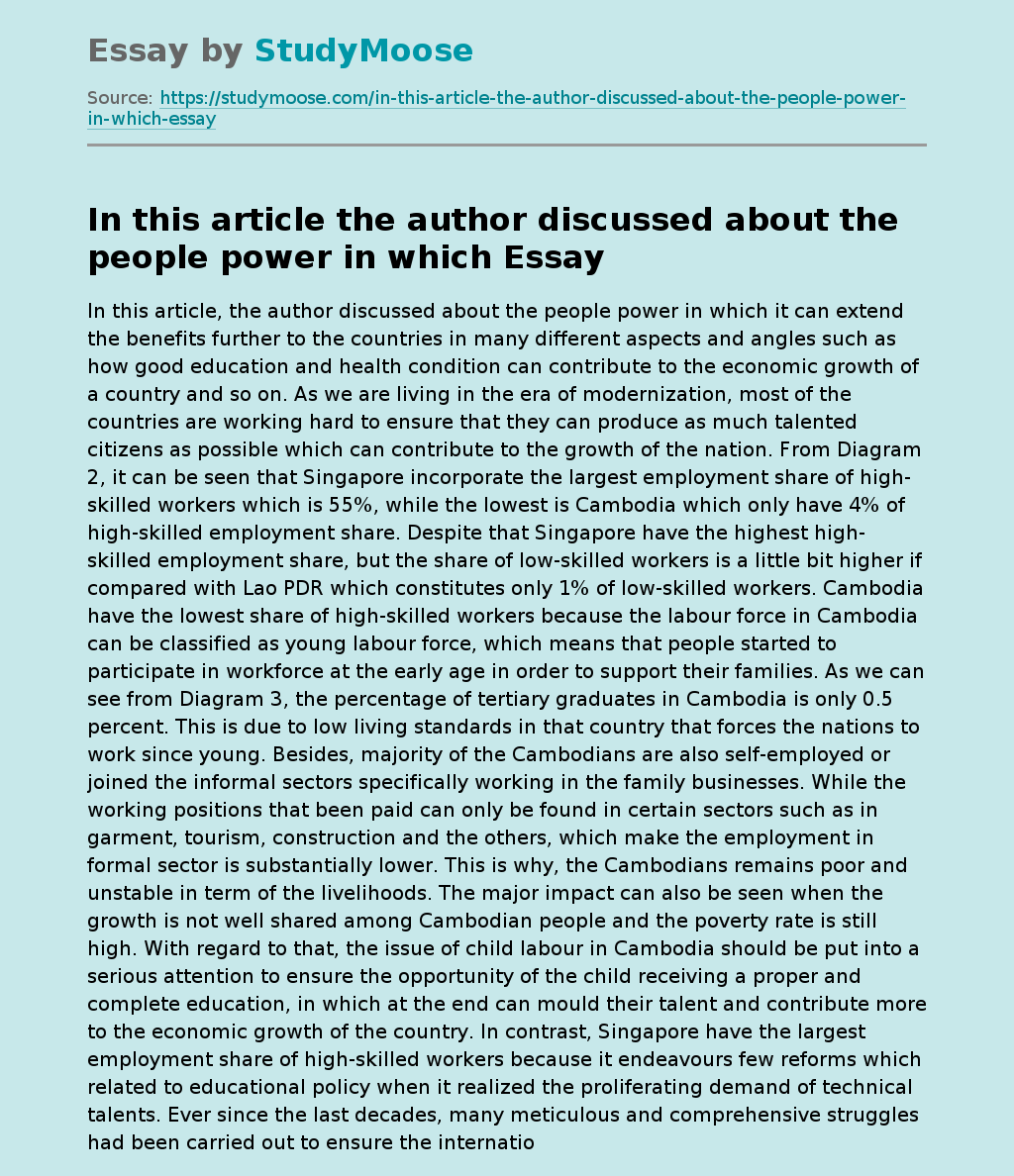