In the poem Among His Books, the poet brings up the theme of death as well as his experience with and feelings towards his old books. His love for books is prevalent in the language he uses and the readers can vividly feel his strong feelings in regards to his books and his uncertain future.

The theme of death is brought up often and is immediately seen from the very first line, “My days among the Dead are past”, in which the term “the Dead” – which appears multiple times throughout the poem – may be a reference to the poet’s old books or it might be a reference to the actual dead.

Don't use plagiarized sources. Get your custom essay on
“ In the poem Among His Books the poet brings up the theme ”
Get custom paper
NEW! smart matching with writer

Were this phrase to refer to the actual dead, it immediately brings a negative tone to the poem as the word ‘dead’ carries a negative connotation. However, saying that his “days among the Dead are past” may indicate that he has decided to stop spending time around the dead – which once again carries negative connotations – or it could indicate that the dead are no longer dead to him.

The latter statement supports the idea that “the Dead” is a reference to his old books as it could be said that when he opens the books to read, the words and stories come alive, as a figure of speech. This interpretation would then cause the poem to take on a more nostalgic tone as his days with them are “past” and it suggests that he is moving on elsewhere without them, leaving behind an empty feeling of the books being left behind.

Whichever interpretation is chosen by the reader, the theme of death is prevalent in the form of actual death or the death of a relationship.

Another significant point where death is brought up is the first and second line in the last stanza which reads “anon/My place with them will be” with “place” referring to “with the Dead”. This insinuates that the poet feels ready to die and seems to acknowledge a life lived well. The word “anon” used echoes a sense of hope from the poet which could be said to have a negative undertone in which he is actually wishing for death – which dims the mood of the poem as a whole. However it also shows that the poet does not wish to leave “the Dead” behind, that he wishes to join them which may bring a satisfying sense of reunion to the reader. On the other hand, if the term “the Dead” really refers to his old books, the meaning changes slightly in that the reader sees that he does not wish to leave them behind after all and that he hopes wherever he goes, he will be able to join them once again, eliciting hope for their reunion.

Southey focuses a large portion of the poem on his experience with his beloved books, which helps the reader understand his deep feelings towards them. He reveals why he spent so much time around them in the first two lines of the second stanza. He takes “delight in weal” and seeks “relief in woe” when he is with them. In this, his unwavering belief that the books can soothe the sting of the harsh realities of life and that they will ‘celebrate’ his joy with him can be seen. The two phrases are of similar structure, creating a sense of lightness within the poem due to the easy rhythm. His experience with them comes to an end when he says “from their lessons seek and find/Instruction with an humble mind” where he recognises the extent to which they have changed his life. The enjambment used in these two lines create a sense of suspense for the reader as they are eager to find out what did the poet “seek and find”. With this statement being the one to end the second and third stanza, where he talks about his experience with them, it gives the impression that he has learnt all that he can from them and alludes to the end of his time with them.

His love for his books can be vividly felt all throughout the poem. Using different language techniques as well as punctuation, he shows the depth of emotion he feels towards them. The capitalisation of the term “the Dead”, making it a proper noun puts emphasis on how important they are to him, that they are not just mundane to him. His deep admiration for the books is also shown by the words he uses to describe them. They are the “mighty minds of old” and his “never-failing friends”, a presence in his life that he feels will never turn on him. The word “mighty” implies that he puts them on a pedestal, which is supported by the fact that he learns lessons of life from them as it is usual for people to look up to those they learn from. The alliteration of “mighty mind” creates a sense of calmness and soothing. It alludes to the relief he finds in them that is mentioned later on. Referring to the age of the books as “old”, he may be referring to the wisdom that is gained over time, which is what he takes his lessons from, as mentioned previously. Southey refers to the books as his “never-failing friends” which can be interpreted as company that will never turn their backs on him. This could give rise to curiosity from the reader as it seems to suggest that the poet has not had the best experience with friendship. It also highlights the importance of the books to the poet, that he depends on them to always being there for him, which also links to the fact that he goes to them to seek comfort and celebrate joy.

His uncertainty about his future is shown when he says “leaving here a name, I trust,/That will not perish in the dust.” He is unsure as to how his memory will be left behind, and he puts his “trust” that he will be remembered as remarkably as the old books that have left an impression on him. His hope to live on as one to be noted can be seen here when he says he wants to leave his memory that will not “perish in the dust”, making it something tangible and concrete that can be felt by the reader. This can be linked to the first line of the poem where his acknowledges that his days with “the Dead are past”, perhaps referring to the fact that he realises that if he wants to leave a mark on the world he will have to step out of his comfort zone and into the ‘living’.

Southey possesses a strong narrative voice in the poem, speaking as someone who seems to identify with “the Dead” rather than the ‘living’, that he prefers the company of the old books over the company of other people. The poem is made to feel personal through the use of “I” and “my”, which suggests that this poem is a true reflection of his thoughts and feelings towards his books, making the reader recognises the vulnerability of the poet and feel empathetic towards him. His voice is one of satisfaction and nostalgia, where he seems to have lived a fulfilling life and that he understands he has to leave it behind. His reluctance and sadness at having to part with them shines throughout the poem, giving a sense of loss. The constant structure of the poem in which the rhyme scheme of each stanza is the same adds to the strong narrative as a sense of regularity is established.

While the meaning of the poem seems clear, the ambiguity of the meaning behind “the Dead” may cause confusion to the reader. Southey approaches the theme of both love and death and displays his affection and nostalgia towards his beloved books openly as the readers also understand the importance of the books. This poem may also act as a stimulant to encourage readers to indulge in reading or to bring to attention the appreciation of literature.

In the poem Among His Books the poet brings up the theme. (2019, Nov 22). Retrieved from https://studymoose.com/in-the-poem-among-his-books-the-poet-brings-up-the-theme-example-essay 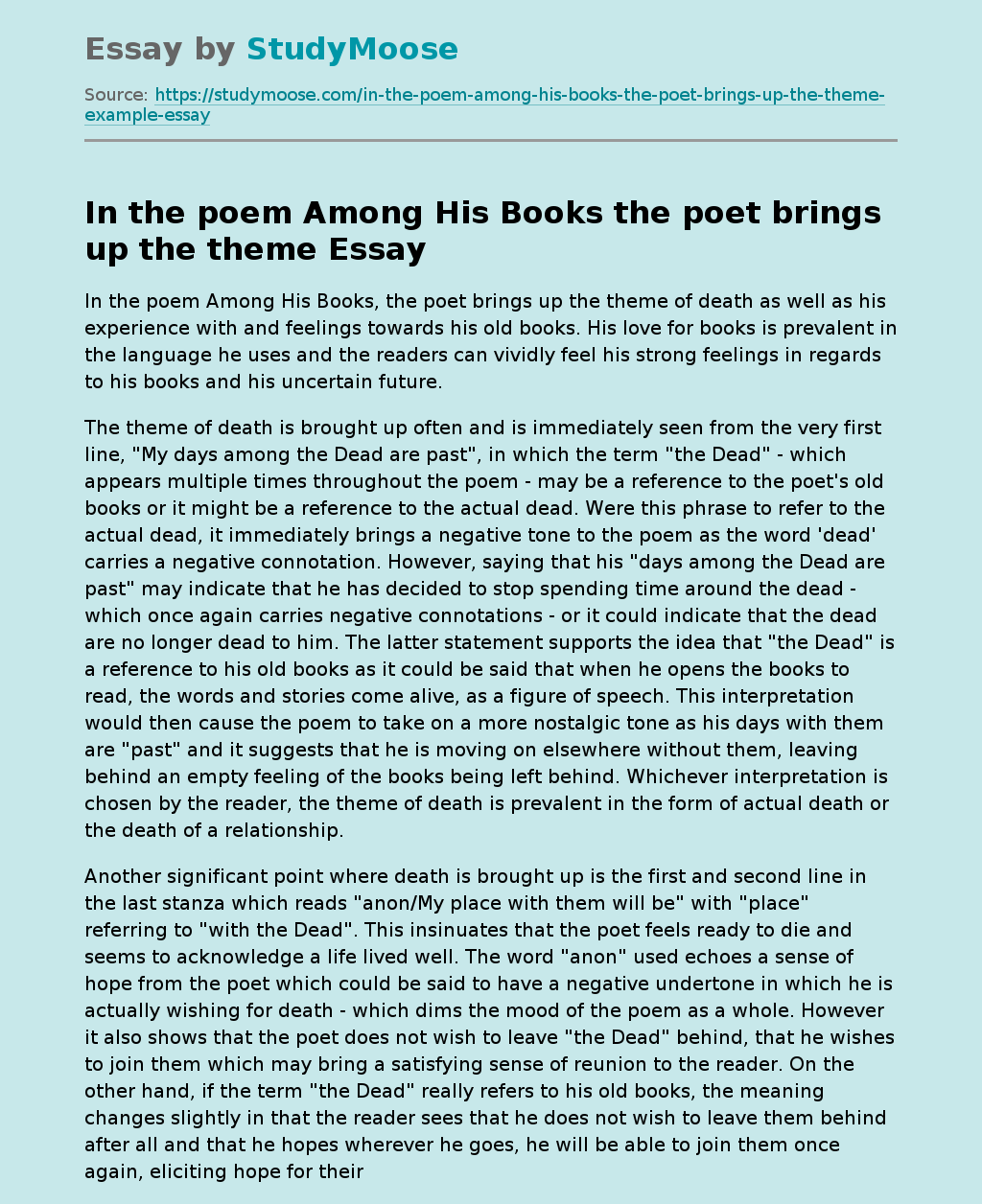