In The History Of HipHop - Nicki Minaj

In The History Of HipHop, There Have Only been a few female rappers to dominate in the male genre of music. Starting from Rappers Like Mc Lyre , Salt & Pepa , Lil Kim , Foxy Brown , Missy Elliot .. & Now today …… NICKI MINAJ. Nicki Minaj Born Onika Tyanna Maraj Born December 8, 1982 Was Born In Trinidad. She started underground in the year of 2007 and was seen by rapper “ lil wayne “ rapping in a staircase in 2009 signed nicki minaj into the MAIN STREAM WORD.

Don't use plagiarized sources.
Get Your Custom Essay on In The History Of HipHop – Nicki Minaj Just from $13,9/Page

Nicki Minaj Dominating the hiphop world in the time of 2009/10 with features with multiple artist leading up to her first studio album ( PINK FIRDAY ) which was release November 19th 2010. Nicki Minaj has been the FIRST female rapper since Missy Elliot to be an successful billboard selling rapper. But before that Minaj released her first mixtape Playtime Is Over in 2007 with Dirty Money Records. Her second mixtape, Sucka Free, was released on April 12, 2008 under the label Be.

She won the Female Artist of the Year award at the 2008 Underground Music Awards shortly after. On April 18, 2009, Minaj released her third mixtape Beam Me Up Scotty under the label of Trapaholics Records; it received positive coverage on both BET and MTV. She also appeared in XXL magazine during this time. In August 2009, Minaj signed a record deal with Young Money Entertainment, with distribution from Universal Motown Records, after fellow American rapper Lil Wayne discovered her on The Come Up DVD.

Minaj generated significant attention when she first appeared on Yo Gotti’s 5 Star Chick video, which gave her mainstream success with the urban community. At the request of Jay-Z, Minaj was asked to feature on Robin Thicke’s single Shakin’ It 4 Daddy. Following the guest appearance, Minaj was given a solo rap verse in the single “BedRock”. The record garnered huge commercial success, reaching number 2 on the Billboard Hot 100. She also appeared on “Roger That,” which charted at number 56. The song, particularly Minaj, received positive reviews from critics.

In December 2009, both songs were included in Young Money Entertainment’s debut collaborative studio album We Are Young Money. The album charted in the top ten on the Billboard 200, reaching number 9 and later receiving a Gold Certification by the RIAA. Minaj was featured on Mariah Carey’s “Up Out My Face” and its music video. The collaboration was well received by critics. Minaj has stated that artists who have influenced her musical style include Lisa “Left Eye” Lopes, Lil Wayne, Smokey Robinson, Lauryn Hill, Jadakiss, Natasha Bedingfield, Lil’ Kim and Missy Elliott.

She was also inspired by Janet Jackson,Madonna, Britney Spears, Marilyn Monroe, Grace Jones,M. I. A. , and Cyndi Lauper. Minaj cites Foxy Brown and Jay-Z as major influences, saying, “I really loved [Foxy] as a female rapper. I was really interested in her mind and her aura, I was really, really into Jay-Z. Me and my friends in high school, we were reciting all of the Jay lyrics. His words were our words in our conversations all the time.

I never really told Foxy how much she has influenced me and how much she changed my life, and you’ve gotta tell people that when they’re alive to even be able to take the compliment, instead of paying tribute to them when they’re no longer here. “She has said that Foxy Brown was “the most influential female rapper” and that her album Broken Silence changed her life. Minaj has been embroiled in a feud with veteran rapper Lil’ Kim since her success with Pink Friday. Kim accused Minaj of copying her image saying, “If you are going to steal my swag, you gonna have to pay.

Put your music out, and when I see your name on Billboard, that’s when I’ll respond to you. Other than that, goodbye. It’s Barbie, bitch. ” Lil’ Kim reignited the feud with the release of her mixtape Black Friday (the title of which directly referenced Minaj). The artwork portrays Lil’ Kim decapitating Minaj with a sword. A fragment of a diss track called “Tragedy” was released in response by Minaj in April 2011. Following the release of Pink Friday: Roman Reloaded, critics suggested that the track “Stupid Hoe” may have contained attacks directed at Kim.

Lil’ Kim later suggested in an interview with 105’s Breakfast Club that the song “Automatic” was similar to her unreleased material, also calling Minaj “obnoxious” and “catty”. The feud has drawn attention from various other recording artists and rappers. Minaj’s labelmate and rapper, Drake said “he didn’t give a f— what Lil Kim or nobody else is talking about. ” 50 Cent commented on the situation in an online interview with Power 98. 3 FM saying, “It’s obvious … she [Minaj] was inspired by some of Kim’s styles.

But that’s not bad. There’s not a whole lot of female artists that you can make reference to, so you’ll see those little influences even stronger. I think she’s hot – I think she’s got a good little thing going right now, as far as Nicki Minaj is concerned. ” Diddy spoke of his love and respect for Kim, attributing his personal success, in part, to her, however he defended working with Minaj stating that “I wouldn’t be around Nicki if I ever heard anything negative said about Kim. I’ve never heard anything like that. “Mary J.

Blige commented on the rivalry, saying, “Kim is my friend and I love and respect Nicki, just met her and got to know the young lady and she’s a sweetheart,” adding that the feud had arisen because of “crews” behind it. In September 2012, Minaj was confirmed to join the judging panel of the twelfth season of American Idol, alongsidge fellow new hires Mariah Carey and Keith Urban and returning judge Randy Jackson. Minaj and Carey have received much media attention for their on-set tension, most notably with a leaked video of the two in the midst of a heated argument during Charlotte, North Carolina auditions.

The following day, Carey alleged that Minaj had threatened to “shoot her” during the aforementioned incident, though Minaj and producer Nigel Lythgoe denied such claims. Minaj left the series upon the conclusion of the season. On April 12, 2013, Minaj became the most-charted female rapper in the history of the Billboard Hot 100, with forty-four appearances. Minaj has confirmed plans to launch her own record label, having signed Parker Ighile, Brinx, and Keisha. The title “Pink Friday Records” was intended, but was scrapped because it was “Not fair 2 the dudes”, with the new name to be released “very soon”.

Minaj is currently working on her third studio album, which she describes as “a continuation of The Re-Up with a lot more”. It is tentatively scheduled to be released in 2013. Minaj has announced plans to appear in her first live-action theatrical film The Other Woman; filming began in spring 2013, with an anticipated release date set for April 25, 2014. Minaj is set to appear as actress Cameron Diaz assistant. Minaj led nominations for rap musicians at the Billboard Music Awards 2013 having seven nominations.

In The History Of HipHop – Nicki Minaj. (2016, Oct 25). Retrieved from https://studymoose.com/in-the-history-of-hiphop-nicki-minaj-essay 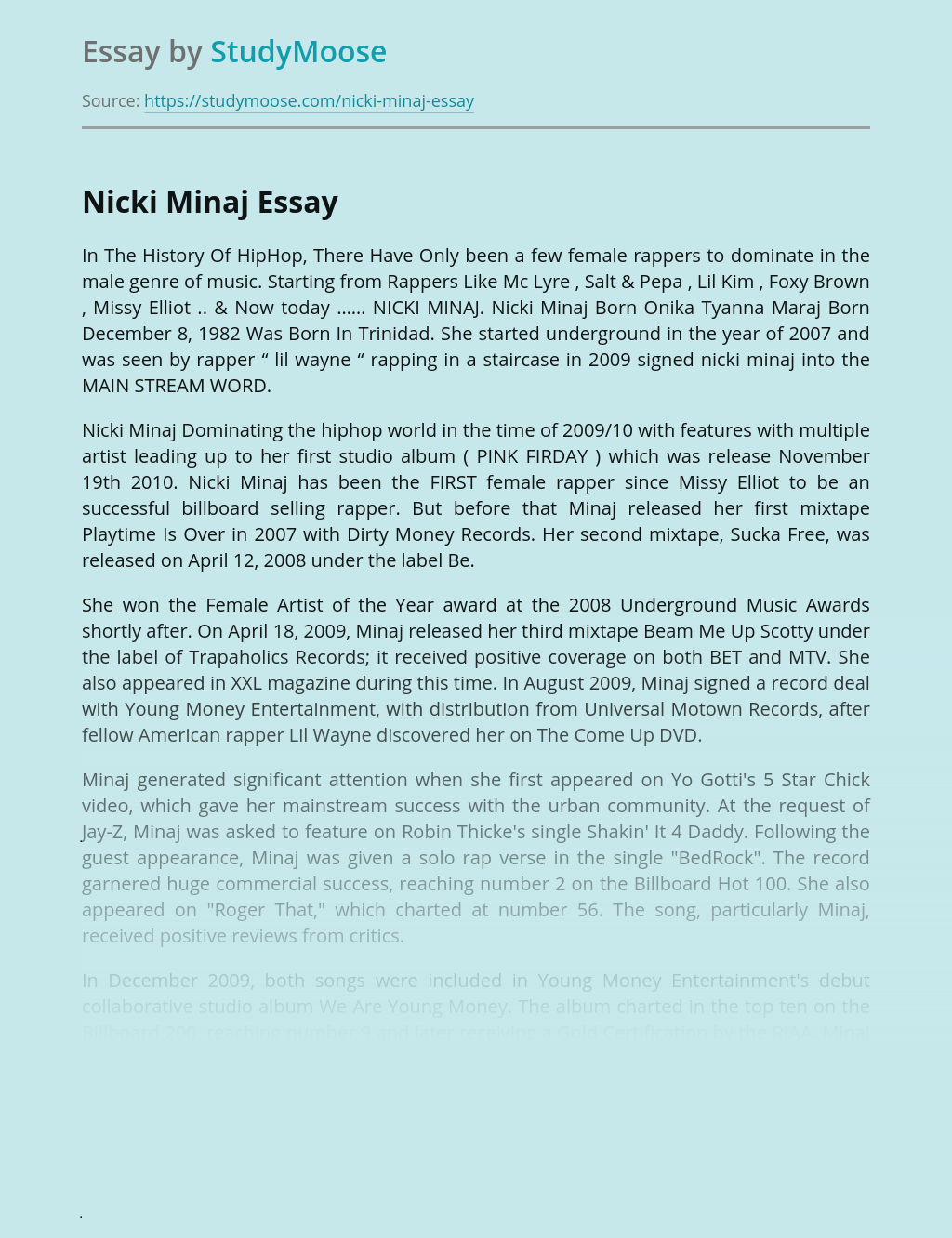