In Jane Eyre love and marriage are important in different ways

It is not personal, but mental endowments they have given you: you are formed for labour, not for love…I claim you not for my pleasure, but for my Sovereign’s service.” In the light of St John’s proposal, discuss the importance in Jane Eyre of love and marriage.

In Jane Eyre love and marriage are important in different ways. In some relationships the two aspects are disconnected and in one they are eventually united. St John views marriage as a practical arrangement.

Don’t waste time
Get a verified expert to help you with In Jane Eyre love and marriage are important in different ways
Hire verified expert
$35.80 for a 2-page paper

‘It is not personal’ shows that St John views marriage as separate from his emotions and love. This supported when he addresses his claim on her ‘for [his] Sovereign’s service.’ He feels that marrying Jane is something he has to do, and he is marrying her for the purpose of duty.

This links to Victorian morality because marriage was generally viewed as something that was done for a purpose such as marrying for status, money or duty.

The society would have frowned upon wild marriages based on love without a valid reason. Apart from St John’s loveless marriage principles, there are elements in the novel where love outweighs marriage, but eventually equalises which is reflected in Rochester and Jane’s relationship. There is also a passionate at first marriage which then becomes incomplete and loveless and this is shown through Bertha and Rochester’s marriage.

St John and Jane’s relationship is one which is more associated with friendship, and the fact that they are cousins, that Jane is in love with Rochester, and St John is in love with Rosamond Oliver means that there is never any romantic link between the two.

There is no love and Jane identifies this. ‘We did not love each other as man and wife should…we ought not to marry’ Jane’s views are very individualistic as society would have not have approved of her ideas that marriage should be the product of true love and passion. Of course St John disagrees with this idea and in fact thinks the opposite so his ideas of love and marriage correspond with those of society.

He tells Jane that ‘[she] is formed for labour, not for love’ which is important because it highlights the reason he is marrying her. ‘Labour’ shows that he thinks that Jane is someone who would be a good missionary’s wife and potential child bearer but it suggests a very mundane style of living which is not what Jane wants. In some ways it seems as if St John is using her because the marriage doesn’t benefit her in any way. The verb ‘formed’ suggests that it is Jane’s destiny and fate to be a missionary’s wife.

St John’s potential marriage to Jane is a direct contrast to if he was to marry Rosamond Oliver. ‘I love Rosamond Oliver so wildly…she would not make me a good wife.’ He loves Rosamond Oliver and his feelings towards her are passionate; the connotations on the adverb ‘wildly’ suggest not only passionate intensity but also that marrying Rosamond would be a wild, reckless decision. However as much as he loves her, his definition of a good wife is not someone who he loves and cares about but someone who is appropriate for his duty. The use, therefore, of St John’s proposal to Jane is a way of showing that he viewed the role of marriage as more important than love.

Jane and Rochester’s relationship has three stages to it, which eventually, culminates in marriage. The first stage is their early relationship, which is filled with love and passion, but is also constantly bordered by social status. Jane and Rochester are kindred spirits ‘I feel akin to him’ there is a deeper connection immediately between the two which provides the basis of their love.

On top of this the passion between the two of them is immense. ‘Come to the fire.’ When Rochester says this, it is an indication that he wants Jane to be closer and attracted to him.’ He represents the ‘fire’ and the passion which Jane’s life until then had been lacking. Rochester’s status is only due to experience but they are intellectually equal. Mr Rochester is used to giving orders and Jane receiving them. An important point however is Rochester’s constant portrayal of leaning on Jane. This evens out the social superiority he has over her, because each time he leans on her, and their relationship develops, Jane grows in social status.

The next stage of their relationship is when Rochester proclaims his love for Jane and proposes.’ I summon you as my wife.’ This proposal can be compared to St John’s because even though both of them have the commanding tone, Rochester wants Jane for himself, not for duty. The verb ‘summon’ could indicate that that Rochester believes that being his wife is Jane’s destiny. Even though Jane accepts, she has doubts. These are amplified when she finds out about Bertha Mason. ‘Jane fears the “vapoury veil” that Jane Rochester will wear for an unequal marriage and secretly desires to tear it up; Bertha does it for her’ She is not willing to surrender her dignity for the sake of passion. In some ways the discovery of Bertha Mason is a blessing in disguise. She follows her head and not her heart and this leads to her leaving Thornfield, and Rochester.

The final stage of their relationship is when Jane and Rochester eventually get married. ‘Reader, I married him.’ Their initial love and passion is still there but Jane’s inheritance and Rochester’s loss of Thornfield and loss of sight is what makes them more socially equal, though it seems Jane is now superior.

The difference between this and the first time they were meant to marry, is that Jane develops, emotionally, mentally and financially, so the marriage is now more inclined to work. Also with Bertha Mason no longer alive, Jane doesn’t feel guilty and doesn’t have to go against the religious acceptance she has developed. The personal pronoun ‘I’ shows that this time it’s her decision because she is ready to marry him. The marriage is now egalitarian. Jane does not lose her independent spirit but it can be argued that ‘Jane does submit to the authority of her husband.’ Jane and Rochester’s relationship shows the perfect union of love and marriage.

Bertha and Rochester’s marriage is one which represents passion at the start, which disappears and is replaces by hatred. They get married based on the initial passion. ‘I thought I loved her.’ Rochester acknowledges that he got married too quickly without getting to know about Bertha, or her life and family. He blames this on the naivety of youth, the pressure of society and his family’s greed for money. Bertha and Rochester’s marriage is significant because it seems to be the paradox for what Jane and Rochester’s marriage may have been similar too, had Jane decided to marry Rochester before. This is why Jane questions if she was mad if Rochester would have treated her similarly which she may have been if she had married Rochester and sacrificed her integrity.

This is also shown when Jane says ‘I experienced a strange feeling as the key grated in the lock.’ This brings back memories of being locked in the red room for Jane. The verb ‘grated’ suggests it was something Jane was used to; a familiar sound. It also suggests that Jane knows what it was like to be under such restriction; there was no means of escape, and it finally shows that it was something which annoyed and upset Jane, which evoked similar but stronger feelings for Bertha.

Jane has experienced a small sample of what Bertha experiences. So therefore Jane and Bertha share similarities and therefore Bertha can be seen as Jane’s antagonist. Bertha and Rochester’s relationship is one which has no love, and one where marriage is portrayed as inconvenient. Their marriage is not what a marriage should be. It can be said that their relationship lacks both love and a true marriage.

In Jane Eyre love and marriage are important in different ways. (2017, Jul 07). Retrieved from http://studymoose.com/in-jane-eyre-love-and-marriage-are-important-in-different-ways-essay 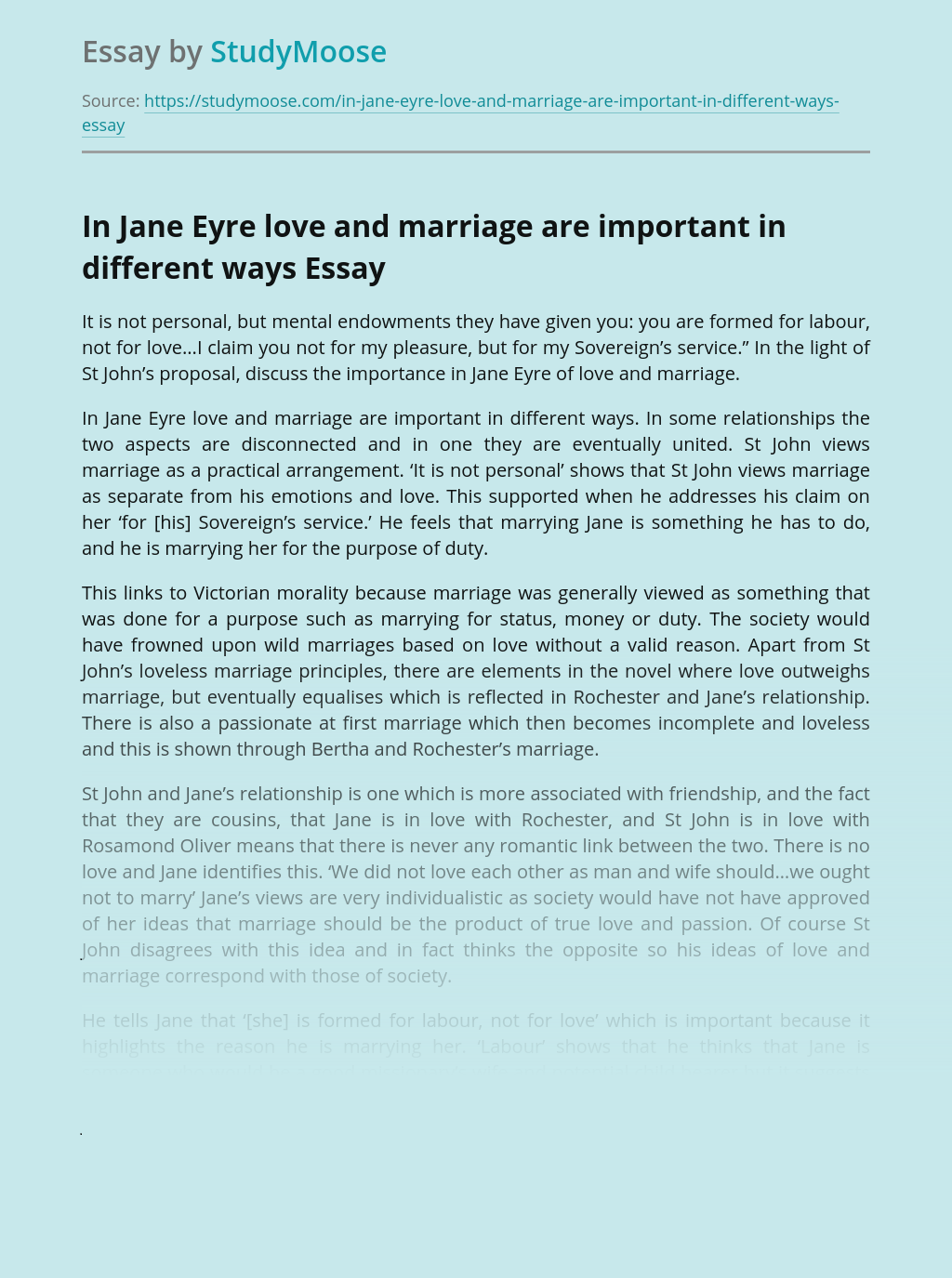 Don’t waste time
Get a verified expert to help you with In Jane Eyre love and marriage are important in different ways
Hire verified expert
$35.80 for a 2-page paper
Stay Safe, Stay Original