Euripides’ Medea is based on the already existing and popular myth of Jason and the Argonoughts and this makes plot very important. As it has a mythical background there is an element of what, to a modern audience, would seem to be magical realism, but to an ancient Greek audience would be believed as possible, for example Medea having divine blood and her grandfather, the Sun God being the deus ex machina taking her away on his chariot. This could also be seen as a weakness in the plot as she is just taken away and it ends.

Don't use plagiarized sources. Get your custom essay on
“ In Euripides’ tragedy ”
Get custom paper
NEW! smart matching with writer

The plot of Medea follows the Greek tragedy structure and so this controls the plot. It starts with the prologue, the opening scene that tells the audience of the background to the story, and then there is the parados, which is the entrance of the chorus. This is followed by the episodes, which each end with a staismon (choral ode) – in Medea there are six episodes.

It then ends with the exidos, in which all of the players make a ceremonial exit. In Medea the purpose of many characters is to serve the plot, these characters do not have very large roles – they are the stock characters.

There is the Nurse with whom the play starts. With her monologue to the audience, she introduces the story and sets the scene. She announces that Jason has left Medea to be with the daughter of Creon. She also tells us of how Medea met Jason, fell in love with him and betrayed her father and country for him.

She fears for their children’s safety and describes Medea as a “wild bull” (line 83). This could be a sign of Medea’s character to come The Tutor also appears in the first episode and reports to the Nurse that he has overheard the King’s wish to banish Medea and her sons from Corinth.

He is told by the Nurse to keep the boys away from Medea in her present mood. This could be another insight into Medea’s character and this also suggests that they already know or fear of her murderous intentions. There is the Messenger who brings us details of the violent action that does not happen on the stage, the obscene. This is not played out on stage as it would be hard to make it look realistic in Ancient Greece without actually hurting or killing someone. Without the messenger the audience would not know of the deaths and violence that has occurred. They are a tool of the plot.

Also there is the chorus, who link the episodes and provide more information and an explanation of Medea’s character. They also act as confidants and consciences of characters and are slightly prophetic, “Since you have confided in us… We want to help you, but we can’t reject the laws of human life. We say, don’t do this, (lines 789-792). Medea takes the chorus into her confidence and they sympathised with her and think it right for her to want revenge, but not by killing their children. King Ageas’ sole purpose is to serve the plot by giving Medea somewhere to go after she has committed her terrible crimes.

If he was not in the play then Medea would have nowhere to go as she cannot go back to Colchis, her homeland because she betrayed her family for Jason, and being a foreigner in Ancient Greece was very hard. Her future would be very uncertain, “you have your city here … I am alone” (lines 242-244). However character also plays an important role. Euripides was the youngest of the three most famous tragedians, and his style differs significantly from that of Aeschylus and Sophocles. Euripides looked more closely at human rather than divine motivation. Because of this his characters focus much more on psychological realism.

He focused on human emotions such as love, passion, anger and actions such as betrayal. In addition Euripides speaks of issues of a more controversial nature, including the role of women. In this play there is not a male protagonist, but a female one. We see her motivations and her realism. The audience views the plot from her point of view. She is not only a woman, but also a witch, this shows how people fear women with power. Euripides shows how people react strangely to crisis. This is demonstrated in Jason’s reactions when he finds out his children are dead.

Strangely what he wants to know is where they were killed, “Where did she kill them? Indoors or out here? ” (line 1291), this was his first impulse. He cannot comprehend a mother killing her children, and is sure that she is a barbarian “Hateful creature! O most detestable of women” (line 1303). In other stories about Jason he is generally shown to be a typical hero figure, but Euripedes portrays him as being vain, egocentric and selfish. Jason uses words such as “my” and “I”, in his speech to Medea (lines 877-894) and this particular emphasis on the personal pronouns demonstrates his self-centred nature and helps to develop his realism.

We also find out why Medea does the things she does, her reasoning, such as giving Jason’s new wife poisoned gifts to kill her just to spite Jason. She kills her sons, to give Jason great pain “My heart cries out in grief for what must be done thereafter. I shall kill my children. No one shall take them from me” (lines 767-770). This is not something, which she takes to lightly. She is so hurt by Jason’s betrayal, because she had to betray her family, kill her brother and sacrificed her position to be with him “I betrayed my father and my home” (line 462) and he then marries another woman because she is richer.

This again demonstrates Jason’s nature – opportunistic, as he wants to advance himself in society. In many plays there is the idea of actions being cyclical in nature, this could be showing betrayal to be so. The murder of their children is the only way Medea thinks she can truly hurt Jason. “In this way I will hurt my husband most”(line 796), and her plan works, Jason’s devastation is shown in the line “you have destroyed me, woman! ” We see Medea’s massive internal conflicts – her bitter love for her children and her pride and desire to hurt Jason.

She is torn between her feelings. We see that even though Medea has some divine heritage she is mostly human “you are of noble birth, descended from the Sun God … but we are women too” (lines 395-396) and so she has flaws – her love, almost obsession for Jason and her angry nature. Jason describes her as “a lioness, not human” (line 1322). This animal image shows her angry nature, and also her dominance as in a pack of lions the lionesses hunt and are the ‘bread winners’.

In Poetics, Aristotle said, “Plot then is the first principle, and, as it were, the soul of tragedy: character holds the second place” this is true for most tragedies of this time. However Euripides’ Medea seems to be the other way round, with characters being the ‘soul’ of the play and plot holding second place. Character is more important in Euripedes’ play because of their realism and the development of their personalities. However plot is also very important because many of the characters are there solely to serve the plot, the stock characters. 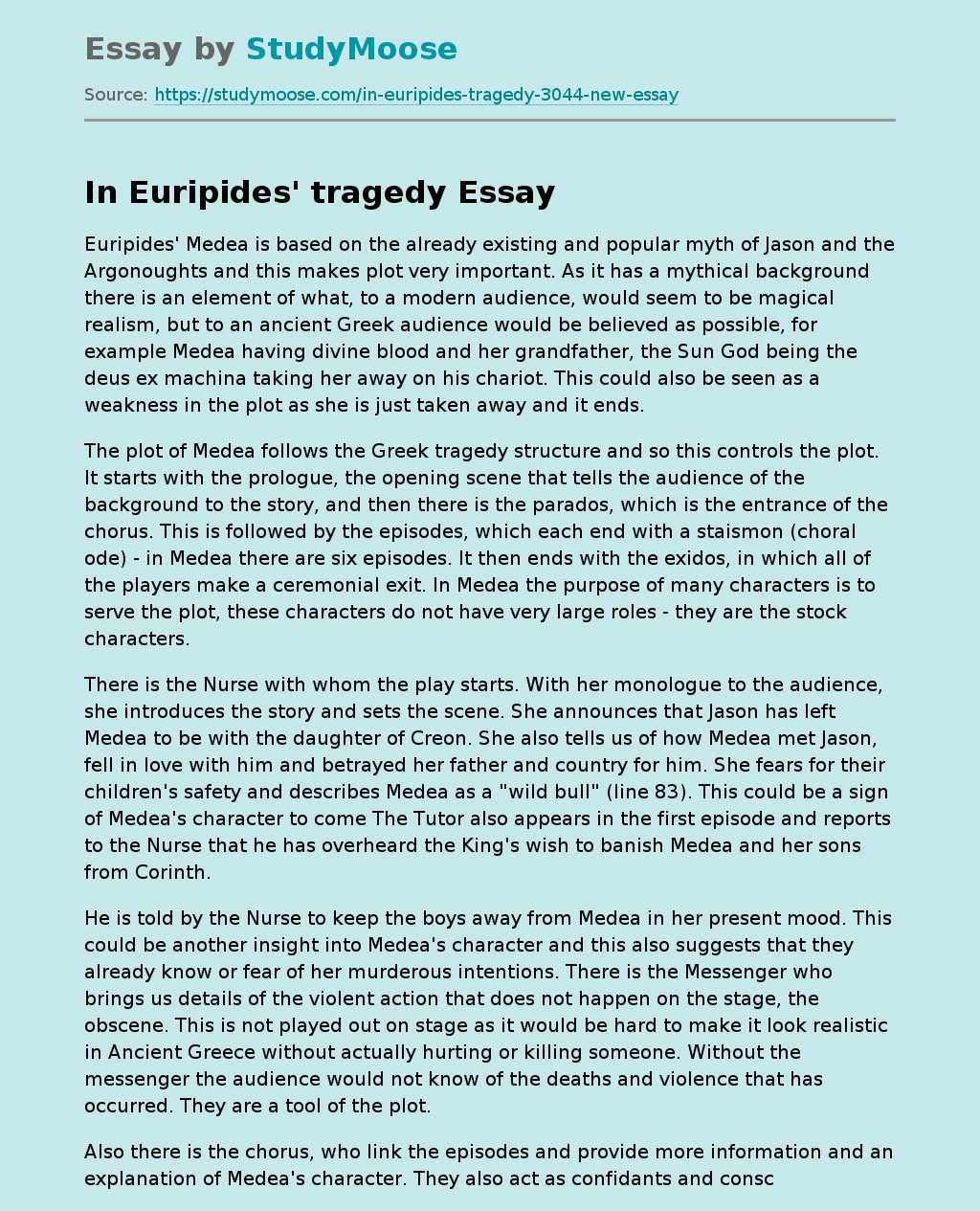