The letter begins by her talking about the family and her children, maybe she was hoping he’d show remorse. Barbara writes the letter to Perry intending to make sense of what had happened she tries to show that she still loves him by enforcing that he’s the only brother she has left. However, the letter takes a turn of events when she later questions his actions. Implying how his actions has led the family to break.

Capote uses the letter to show Perry what he’s left behind.

Don't use plagiarized sources. Get your custom essay on
“ In Cold Blood: Barbara’s Point of View ”
Get custom paper
NEW! smart matching with writer

The negated verb in Barbara’s letter “but that was not the reason I haven’t written.” Emphasises how she was meaning to write to him but her busy life with her children prevented her from doing so. The pair of verbs “Donnie has learnt to close doors and climb on the chairs.” Suggests how Perry as the uncle is missing out on his nephews first few steps. Highlighting how Perry’s alternative routes has impacted the family hugely.

The adverb of time “you are my only living brother and the uncle of my children” emphasises the relationship she holds with him and how much he means to her. Despite him straying off to the wrong path, Barbara is still trying to get Perry to conform and own up for his actions and not blame others, give a sense of closure. Barbara uses Perry as a foil to convince herself that her own lifestyle is “normal,”

Barbara’s tone changes as she starts to scold Perry for his irresponsible lifestyle and the disrespect towards their father.

The metaphor “it is a shame to have a dirty face – the shame comes when you keep it dirty.” Suggests that Barbara is disappointed but willing to forgive perry if he cleans his face referring to the crimes he has committed. The adjective “Dirty” is a metaphor for Perrys misdeeds. Barbara claims that his past has continued to show itself because he refuses to clean it. The adjective in Barbara’s noun phrase “your present confinement is embarrassing to me as well as dad” emphasises how much she is ashamed of Perry, being his older sister, she has the ability to judge her brother against his actions which is what Barbara does. The negated verbs “you don’t show me any signs of sincere regret” suggests how maybe Barbara would welcome Perry back if he showed remorse. Barbara is limited not only by her conformity, but by her own frustrations and insecurity related to their family history and is therefore incapable of empathising with Perry’s situation.

The adverb of time followed by the adjective “You and only you are responsible” emphasises how much Barbara is trying to ger Perry to accept his mistakes instead of trying to blame others for his downfall. Capote uses the letters to show to Perry what it is that he has lost. He uses the voice of Barbara to give a familiar to Perry and emphasises how disappointed his family is in his actions. 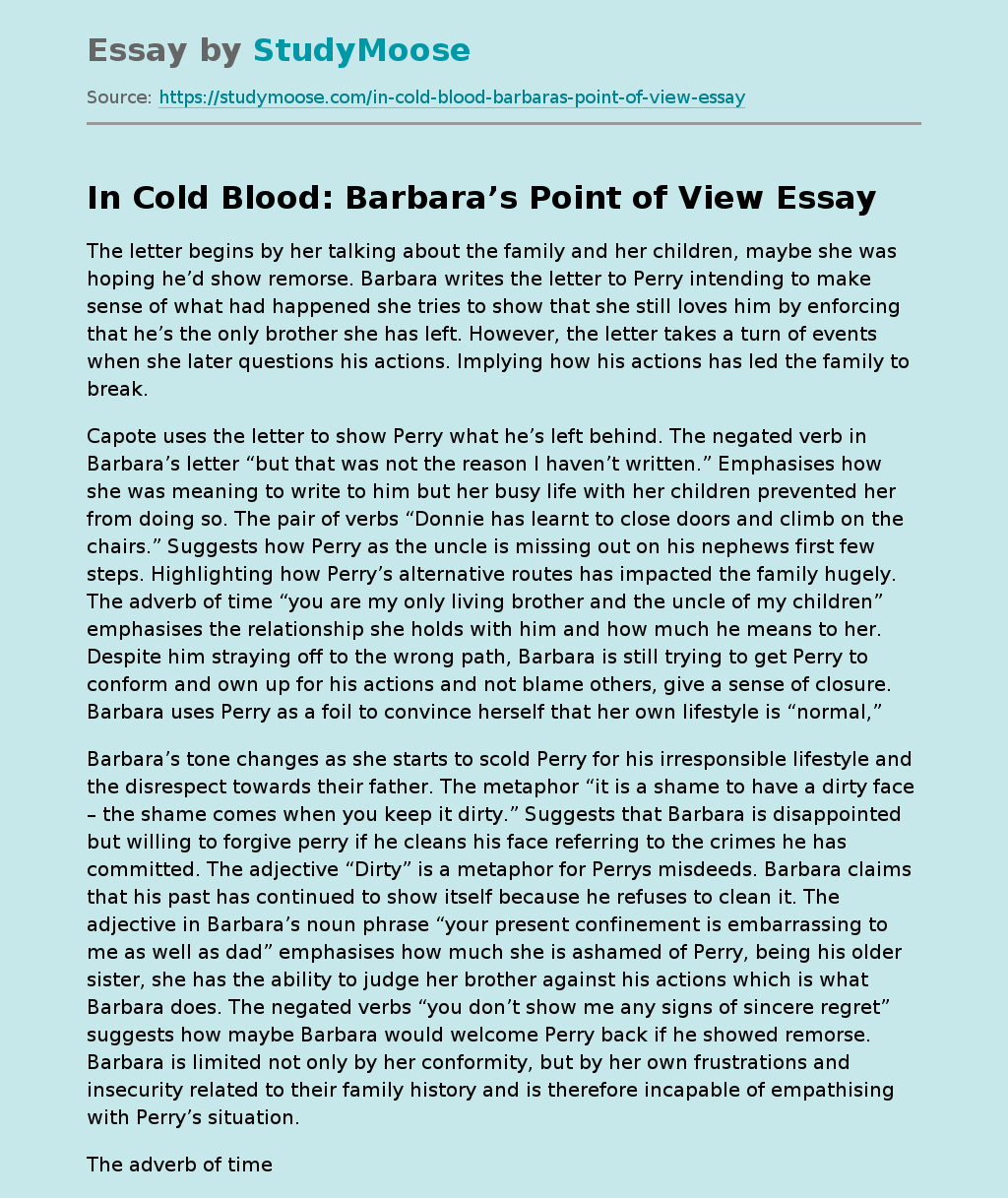