Impression management is where a person tries to influence the perception of their image usually to try and present the image they would like others to see. Impression management (IM) is relevant to the interview situation because both the interviewee and interviewer will use IM to present their desired image. Gilmore & Ferris (1989) recorded a selection of interviews and had interviewers watch them and they found that those applicants who used high levels of IM were chosen to be most suitable for the job.

Don't use plagiarized sources. Get your custom essay on
“ Impression management ”
Get custom paper
NEW! smart matching with writer

IM involves the use of NVC and so interviewers should be trained to spot the NVC that is commonly found in IM applicants which could include many nods of the heads in agreement, this is because some applicants can overuse IM and the so the applicant is more interested in their IM than the actual interview “tactical IM behaviours are frequently used by applicants in the employment interview, but such tactics lose the effectiveness if overdone” Baron cited in Gilmore and Ferris (1989) p.

153 makes reference to why NVC is important, firstly it’s irrepressible “it’s hard to not make an impression nonverbally” and therefore it’s linked to persons emotions. Also NVC is elusive in the fact that “people may be more likely to risk expressing something nonverbally than verbally” which links to how NVC is spontaneous “The quickness of nonverbal behaviour increases its perceived sincerity” These points highlight how valuable NVC really can be and why suggestions of improving ways to spot the behaviour could enhance decision making.

This is supported by Hinton (1993) p. 133 “the human perceiver has been seen as biases and error prone in making judgements” Because NVC expresses individual qualities in a person it is very hard to put every body in the same category when making decisions based on their nvc but it can somewhat help recruiters.

To conclude on whether NVC could help in an interview situation there are a few key notes to keep in mind. Firstly “It is essential that you recognize what norms are operative in that context since they serve to define the context” Burgoon et al (1978) p.85 it’s crucial that the interviewer understands what forms of nonverbal behaviours are the ‘norm’ in an interview situation, understandably there will be an element of nerves in an applicant so what the interviewer needs to conclude is whether their level nerves are due to the actual situation.

This follows into the second point which is for the managers to eliminate any devices that could make a negative impact on the applicant and this would include furniture and structure.

Thirdly, interviewers should recognize nonverbal behaviours in groups and not as a single cue “The problem with using NVC in an interview as an indicator of what a person is thinking or feeling is that it is subject to too many idiosyncrasies” Breakwell (1990) p. 42. There is a great lack of evidence which suggests that organisations are actually training their interviewers to spot any signs of NVC but there is evidence that proves recruiters have low validity when making decisions (0. 14) there is clearly an imbalance which needs to be addressed, the study of NVC could be the missing link in improving decisions.

As mentioned, Tony Blair is a fine example of how NVC can be taken advantage of, but of course he has numerous spin doctors equipping him with advice, one suggestion would be to use these spin doctors to not only train interviewers on NVC but for them to also conduct interviews themselves. Clearly there are many suggestions to help spot NVC when interviewing, the process to achieving optimum results would consist of trial and error and massive amounts of training so it would be apparent that each organisation would have to adapt their use of NVC to suit their work culture. 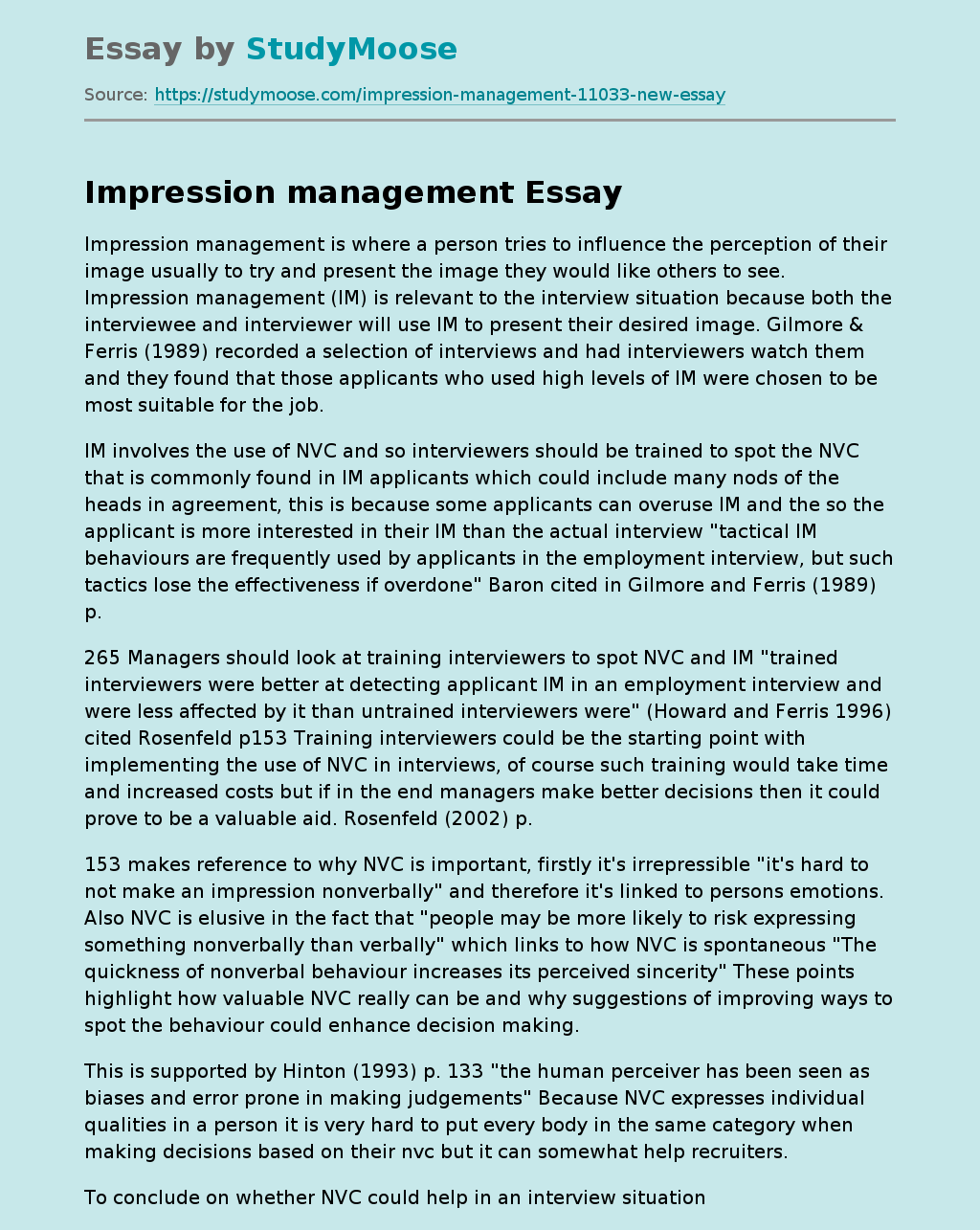