* George Washington – led colonists during the war. He was a colonel. Made a name for him and the experience of this war helped in the American Revolution. Both civil and military because he led a group of Militia. * General Edward Braddock – He led a group of two thousand men to capture Fort Duquesne. His group was ambushed and he died in the battle. * Earl of Loundoun – He was appointed commander and chief in 1756 of the British forces and caused failures for the British.

Don't use plagiarized sources. Get your custom essay on
“ Important Leaders in French and Indian War ”
Get custom paper
NEW! smart matching with writer

* William Pitt – He took leadership of the British ministry in 1756. His aggressive new policies for the war were a major part in turning the favor of the war towards the British in the later half of the war. Important civilian leader. Known as the “Great Commoner”. He drew much of his strength from the common people.

* Captain Robin Rogers – He led the Rangers (a group of New Hampshire men) and operated as spies and used guerrilla warfare against the French successfully through the war.

* James Wolfe – important general who led the British to an important victory at the Battle of Quebec.

* Jeffry Amherst – He is best known as one of the victors of the French and Indian War, when he conquered Louisbourg, Quebec City and Montreal. He was also the first British Governor General in the territories that became Canada. Many places and streets are named after him, in Canada and the United States. * James Abercrombie – British General and commander and chief. He is most known for the terrible British defeats in the 1758 Battle of Carillon.

* Edward Boscawen – He was second in command for the siege of Louisburg and led a fleet and won in the Battle of Lagos. Important French military leaders and civilians/heroes

* Louis-Joseph de Montcalm – He took over as commander and chief of the French forces in North America. He was a great feared leader who died at the Battler of Quebec. * Francois-Marie de Lignery – Colonial military leader in the French province of Canada. HE was active in the defense of New France in the French and Indian War. * Marquis de Vaudreuil – In 1755, he became the governor of Canada, replacing the Marquis Duquesne.

* Fort George/Fort Duquesne/Fort Pitt – This centrally located fort in what is now Pittsburgh, PA changed hands many times during the war. It was the site of England’s first disastrous battle, in which Braddock lost his life. * Fort Necessity – This hastily constructed fort in Great Meadows, PA was the site of George Washington’s first defeat in 1754. Later in American history, it oddly came to symbolize the rugged spirit of the colonials.

* Fort William Henry – Site of the most notorious massacre in colonial history, this fort located near the Hudson River fell to the French in 1757. * Louisbourg – An important city on the east coast of Canada (in present-day Nova Scotia). It was a French stronghold of arms and supplies. * Ticonderoga – A major French fort and city north of Albany. The British failed repeatedly to seize it; they finally succeeded in 1759. 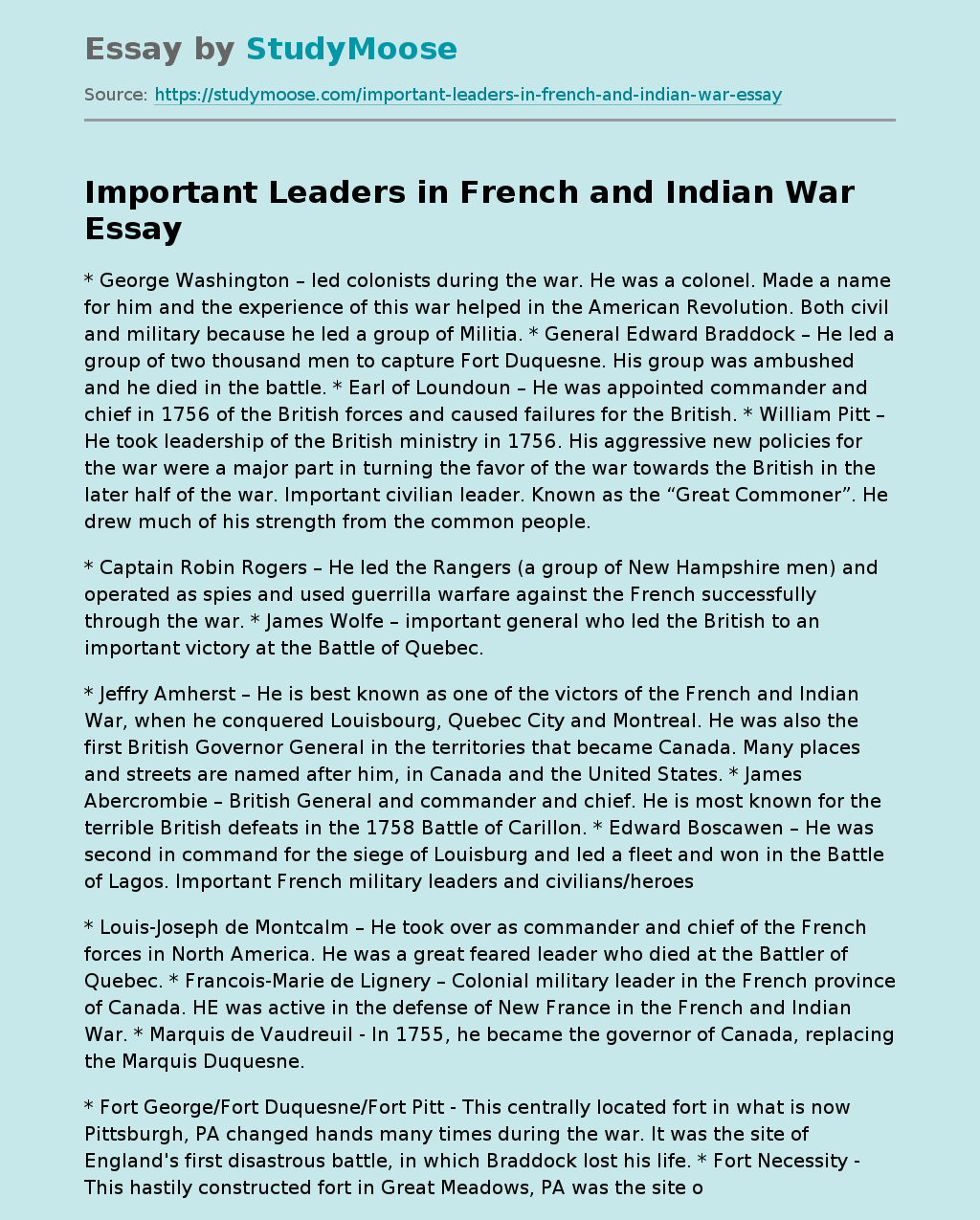