How important is context to our understanding of Churchill's Top Girls?

The fact that Churchill grew up just before the beginning Second World War tells her background to the audience. What she faced and went through, like the lack and struggle for food and shelter.

“I was horrified by the lack of equality across class, gender and race”- Caryl Churchill

England by that time- the 1980s was completely riven with the political instability, the liberalization of sexuality and the period of economic growth. The context of the play is mainly to do with these times but also about Margaret Thatcher, when she came to power and Britain was believed to have more power and influence over industry than the government.

Don't use plagiarized sources. Get your custom essay on
“ How important is context to our understanding of Churchill’s Top Girls? ”
Get custom paper
NEW! smart matching with writer

Thatcher was known to break the power of the unions, as she promised that when she will be elected and she was.

Churchill’s success started to grow in the 1980s and it was sudden appearance and shock to society of a woman being a playwright during this period.

“Between 1959 and 1980 only 8% of the plays produced at the Royal Court were by women and most of these were by Caryl Churchill.

The context of Top Girls is feminism too, which occurred from the period in the 1970s when the focus on the unpaid labor women did around home began. This was symbolic as a woman being subordinate to the man. A lot of playwrights, including Churchill, wrote plays with the historical context of historical and famous women in that time.

As Christopher Innes said:| “History has a particular significance for the feminist movement…society has been ruled by men, it is seen as promoting a male system of values.

Churchill uses the contrast of freedom and equality, as Margaret Thatcher believed in freedom of the human society and more freedom being about low taxations, whilst others say that if there were freedom, then some would be very high in power and status, and others very low. There is an overall aim to end up in equality.

There are also personal ambitions VS family tiers however the context and the background of the 1980s still remain very strong these days. It’s not only about the 1980s; there are issues to do with today that still affect the market. The sense of individualism and community is surely present.

Lastly, the appearance of women in Top Girls is shocking to the audience, as they are shown as dominant characters that weren’t present in those days. Language is one of the main weapons used in order to show the dominancy of women, that it can be present in them, however there is a change throughout the play showing that women can sometimes change from successful adults to bored kids.

Silly and cunt contrasting, as in silly being a childish word and cunt, a ratter offensive and rude word that adults use.

The child’s world is very small, showing the community being as if claustrophobic. There is some kind of tension show between the world of the child and the world of an adult, as children actually try to act, as adults because of the use of rude language that makes them, in their opinion, seem older.

Churchill, wanting to show the dominancy of women, suddenly then making them seem immature and childish, creates this just to receive a shocking reaction from the audience, in order to wake them up. She is need of a reaction of the audience being strong and shocking but thinking in another way, she still has that dominancy present in those characters, as she applies the word ‘cunt’ that is spoken by a female and written by a female, showing the power present in them. The rudeness of men is applied to female characters Churchill wrote about.

How important is context to our understanding of Churchill's Top Girls?. (2020, Jun 02). Retrieved from http://studymoose.com/important-context-understanding-churchills-top-girls-new-essay 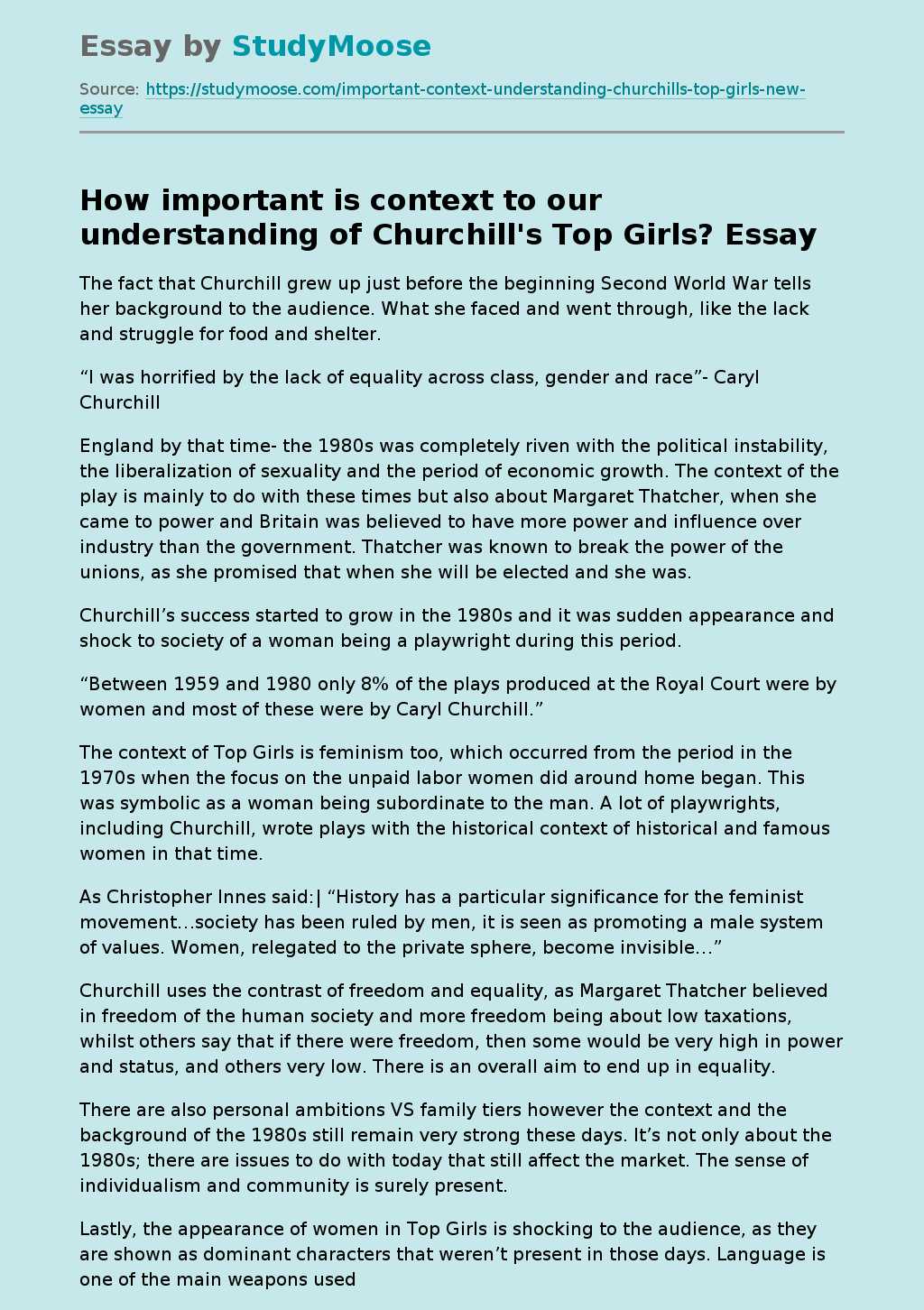