Importance of the Supreme Court for Judiciary

The power of judicial review has allowed the Supreme Court to protect civil liberties within America. Its involvement in civil rights issues have ranged from racial issues, to the rights of those accused and the reapportionment of electoral districts. in 1954, the Supreme Court stated that racially segregated schools were a violation of the equal protection clause of the 14th Amendment. in 1966, the Supreme Court stated that a person must be informed of his/her right to remain silent when arrested and that they have access to a lawyer if required.

Don't use plagiarized sources. Get your custom essay on
“ Importance of the Supreme Court for Judiciary ”
Get custom paper
NEW! smart matching with writer

in 1966, the Supreme Court stated that one person should have one vote when dealing with the apportionment of electoral districts. These are clear examples where it can easily be argued that the supreme courts role in protecting the rights and liberties of US citizens was major. The Supreme Court has played a very important part in preserving the rights (and building them) of minority groups also.

This has been called the “tyranny of the majority” which has meant that the minorities have been left behind in the rush for votes. Chief Justice Marshall argued that there was no other institution in existence that could defend the rights of the minorities other than the Supreme Court. The 1954 decision of the Supreme Court is indicative of its power.

Eisenhower had no great interest in reform in general and Congress was dominated by right wing southern Democrats who did not champion the civil rights movement. Therefore, only the Supreme Court could do this and the south’s educational policy based on segregation was overturned at a stroke. Enforcing it was another issue. The most recent and controversial involvement of the Supreme Court concerned the right to abortion. In 1973, the Supreme Court voted 7-2 to enforce the right of all women to have an abortion even though some states had banned it. They argued that this was allowed under the 14th Amendment. Though this issue was clearly the right of a woman (‘Jane Doe’) to have an abortion in Texas (where abortions were banned), others saw it as an attempt by the Supreme Court to further extend its powers over a state’s right to govern itself within the realms of the Constitution. In 1989, with a more conservative Supreme Court, the above finding was nearly overturned.

However, it was not, but the states took this move to the right by the Supreme Court, as an opportunity to regulate abortions far more closely. The states also gambled on the fact that the Court would not intervene on issues involving the availability of abortions in states. In 1992, the 1973 decision was once again upheld but the Court ruled that a state would be acting unconstitutionally if it placed “undue burden” on a woman’s right to an abortion. The rights and Civil liberties of US citizens are not absolute but must be balanced against other considerations (such as national security or public safety) and against one another when rights come into conflict. The judicial branch of government, particularly the Supreme Court, has taken on much of the responsibility for protecting and interpreting individual rights. The Court’s positions have changed with time and conditions, but the Court has generally been more protective of and sensitive to civil liberties than have elected officials or popular majorities.

Importance of the Supreme Court for Judiciary. (2016, Mar 11). Retrieved from http://studymoose.com/importance-of-the-supreme-court-for-judiciary-essay 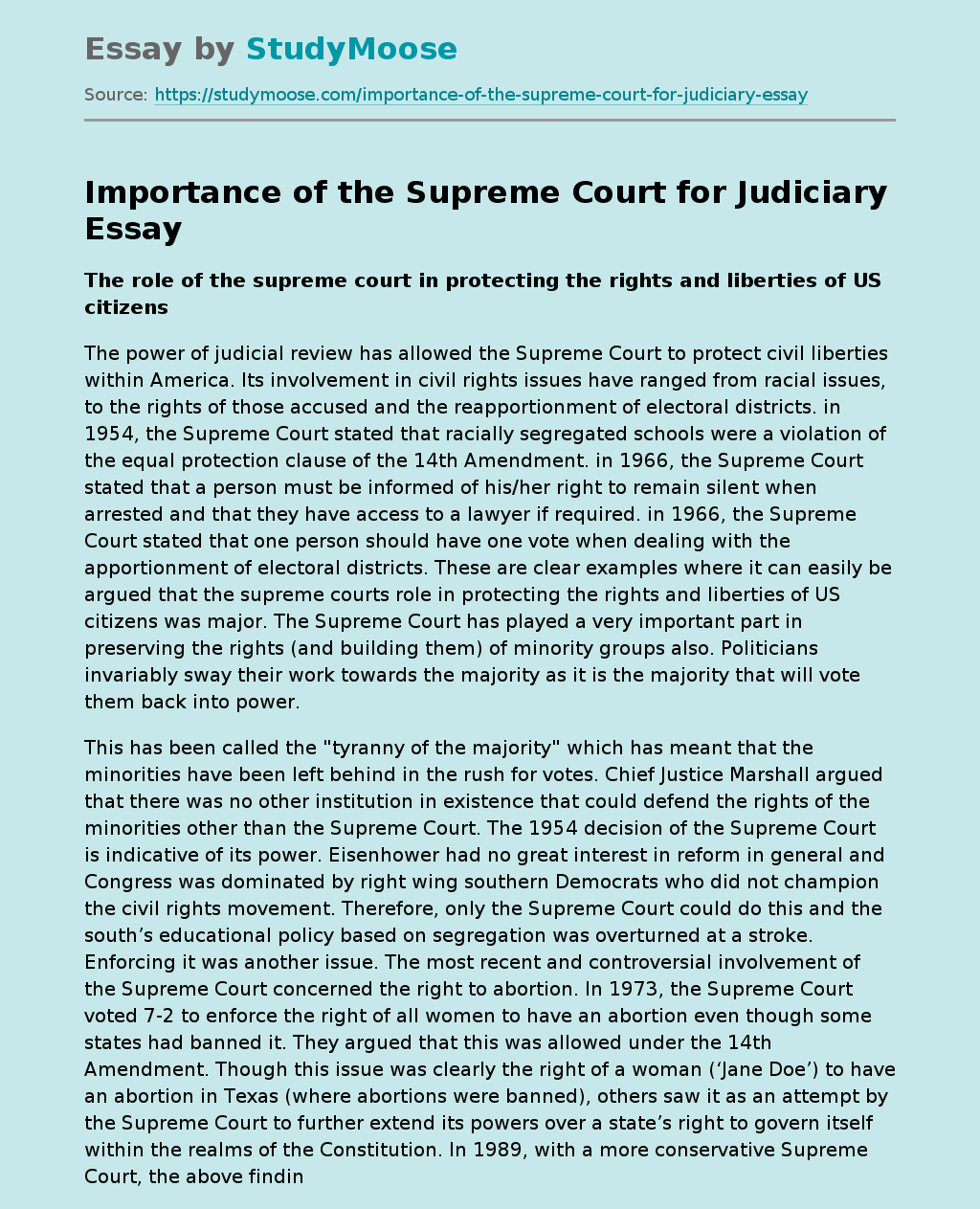