Importance of Silk Road for Trade with China

Between 200 B. C. E. to 1450 C. E. the Silk Road’s interaction patterns changed with the Black Plague and the religious exchange between China and the West. However, the continuity was maintained with its main purpose of trading goods passed along its routes. Flea bites from rats would infect the Black Plague along merchants and consumers throughout Eurasia which caused a decline in the economy. During the Middle Ages ships would stop at various points such as Turkey, Lebanon, and Iraq that are along the Silk Road.

Don't use plagiarized sources. Get your custom essay on
“ Importance of Silk Road for Trade with China ”
Get custom paper
NEW! smart matching with writer

People infected with the Black Plague would have bleeding under the skin, nervous system would collapse and eventually the deadly disease would lead to millions of death in both Asia and Europe. The Silk Road was closed off in 1346 completely to cease the spread of the Plague. Until it was reopened in 1350, the prices of goods were inflated since no trades were happening with the Silk Road being closed off. Even once the Road reopened it took approximately half a year until merchants would start buying spices, silk and jade again since everyone was unsure whether or not the deadly epidemic was truly gone.

After the Black Plague in 1353, China, India, Greece and Persia created a cultural bridge between Asia and Europe where China would focus more on religion due to a cessation with wars. Two of the biggest religion that changed the Silk Road was Buddhism and Islam. Buddhism spread during the Easter Han Dynasty era where the Kushan Kingdom promoted the religion which declares to block off hate, greed and delusion which are causes of suffering.

This could of been the monks way to reassure the people of Eurasia that there doesn’t have to be wars for a longer period of time if the people would escape through meditation.

Besides, Buddhism, Islam is the Silk Road’s biggest religion due to their relation with Muslim merchants. The merchants would follow the principles of life. It’s very similar to Buddhism with how both religions promote peace however, Islam views cheating as forbidden which includes trade. The Silk Road does not follow this rule since it would take away it’s true purpose and without trade there would be no income or necessities of life that people depend on. Despite the changes that occurred between 200 BCE and 1450 AD with the Black Plague and religion, the Silk Road stayed in continuity with its main purpose on why it was created.

The Silk Road has been developed over time with the purpose to transport goods from both Asia to Europe. In 750, a war between Tang Dynasty and the Arab Empire broke out. The Silk Road remained neutral but gave both sides silk to cover wounds, spices to cook with and even gunpowder that Chinese merchants received from trading with the Europeans. In result, the Arabs took Chinese prisoners to Samarkand which is along the Silk Road so the prisoners help made paper.

Europe and Asia remained allies even after the Opium War that happened hundreds of years later. Their relationship started off trading spices and silk for Europe’s wool and literature which gained China to further their education and clothing. The Silk Road has always been about trading off goods even through war or aftertime to bring in foreign goods to learn from. The period between 200 B. C. E. to 1450 A. D. suffered from the Black Plague but regained faith in Buddhism and Islam while staying in continuity throughout the years with trading goods throughout the globe which has always been the Silk Road’s original purpose.

Importance of Silk Road for Trade with China. (2016, Sep 12). Retrieved from http://studymoose.com/importance-of-silk-road-for-trade-with-china-essay 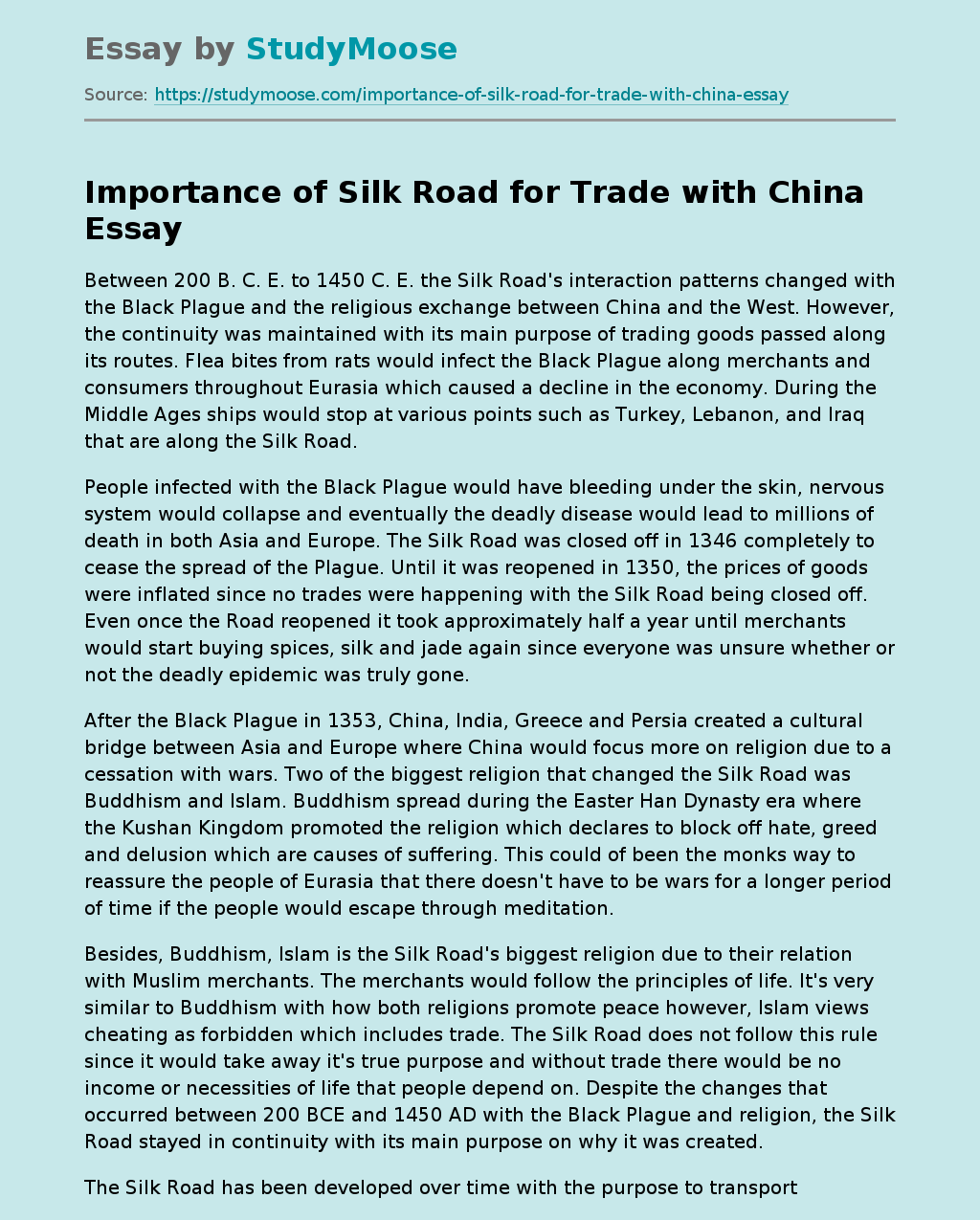