Literature reminds us of stories, epics, sacred scriptures and classical works of the ancient and modern times. Literature is defined as the body of written works of a language, period or culture, produced by scholars and researchers, specialized in a given field. Why is literature important? Let us see. As stated in the quotation by C. S. Lewis, literature not only describes reality but also adds to it. Yes, literature is not merely a depiction of reality; it is rather a value-addition.

Literary works are portrayals of the thinking patterns and social norms prevalent in society. They are a depiction of the different facets of common man’s life. Classical literary works serve as a food for thought and a tonic for imagination and creativity. Exposing an individual to good literary works, is equivalent to providing him/her with the finest of educational opportunities. On the other hand, the lack of exposure to classic literary works is equal to depriving an individual from an opportunity to grow as an individual.

Prose, poetry, drama, essays, fiction, literary works based on philosophy, art, history, religion, and culture and also scientific and legal writings are grouped under the category of literature. Creative nonfiction of the ancient times and literary journalism also fall under literature. Certain extremely technical writings such as those on logistics and mathematics are also believed to be a part of literature. Some of the great literary works like the Bible and Indian epics like Ramayana and Mahabharata, among others, provide society with the guiding principles of life.

The Lord of the Rings, The Godfather, A Tale of Two Cities, James Bond series are some of the best-selling books of all time. The Adventures of Pinocchio, Alice’s Adventures in Wonderland, Winnie-the-Pooh were some of the greatest works in children’s literature. The relatively recent Harry Potter series made record sales across the globe and carved a niche for J. K. Rowling.

However, a discussion about children’s authors would be incomplete without the mention of all-time popular authors like Aesop, Enid Blyton, Roald Dahl and Mark Twain. It is through reading such great literary and poetic works, that one understands life. They help a person take a closer look at the different facets of life. In many ways, it can change one’s perspective towards life. Lives of brilliant achievers and individuals who have made a valuable contribution to society, are sketched in their biographies.

These works give the readers an insight into the lives of these eminent people, while also serving as a bible of ideals. Literature serves as an enormous information base. Research works by famous inventors and literary works by notable scientists often narrate stories of their groundbreaking discoveries and inferences. Ongoing developments in the fields of science and technology are documented so that the world can know about them. Several ancient scriptures relating stories of human evolution and narratives of human life in those times, have been of tremendous help to mankind.

Thus, literature has always served as an authentic source of information from all around the world. True, languages are the building blocks of literature. But the study of literature cannot be restricted to only studying languages. In fact, literature cannot be confined to an educational curriculum. A degree in language and literature is perhaps unable to provide one, with everything that literature can offer. Literature, is definitely, much more than its literary meaning, which defines it as ‘an acquaintance to letters’.

It, in fact, lays the foundation of an enriched life; it adds ‘life’ to ‘living’ Literature is also a mode to express public opinion in variety of genres. It is also a part of tradition, one we pass on to our future generation. It tells us of our rich culture and gives us a sense of pride in our country. Literature is the lighthouse of any culture and to know any culture better we must know its literature as it gives us a true picture of the culture and its development. The extant remains of the literary texts of earlier civilizations throw light on our past and gauge our development.

Literature enriches the mind and reading as they say makes a man perfect. Today there are books available on a variety of subjects, books meant for education, books meant for entertainment and books meant for self- development. There is a book for each one`s choice. All said and done, literary enlightenment of a society is the true measure of its development and progress and India is a land with a rich literary heritage and one that people all over the world look up to for guidance.

Art is an extremely private experience, yet, it is meant to be shared with the public. Society, as a whole, examines the art produced and has the right to approve, disapprove, acknowledge, ignore, praise and abuse it. The public or society has not remained constant over the years. In the time of the Renaissance, for example, only a select few were “society. ” They commissioned art, were patrons of the arts and their artists. Today, almost anyone can share in the experience of art. They can attempt to create, view and act as a critic.

Does art make the world a better place, or is it quite useless? This is a very ancient riddle, and no one has solved it yet. A similar question – has art truly had any impact upon society? Has it fashioned or molded minds? Has it shaped opinions and altered how people feel or think? Is it practicable in or relevant to society and its individuals’ daily lives? Art reflects life. It is a portrait of history, whether it is history of the current moment or an event in the past or something of the imagination.

Art has captured an event, clarifying its existence and representation to society. The portraits of the French Revolution by David, Benjamin West’s portrayal of the death of General Wolfe and Poussin’s recreation of the Rape of the Sabine Women all strive to provide a version of historical events. Society, in turn, can accept or reject these portrayals of true events. Sometimes, as in the case of Goya’s depiction of the French behavior during their conquest of Spain, art inspires a deep hatred of a certain nationality. 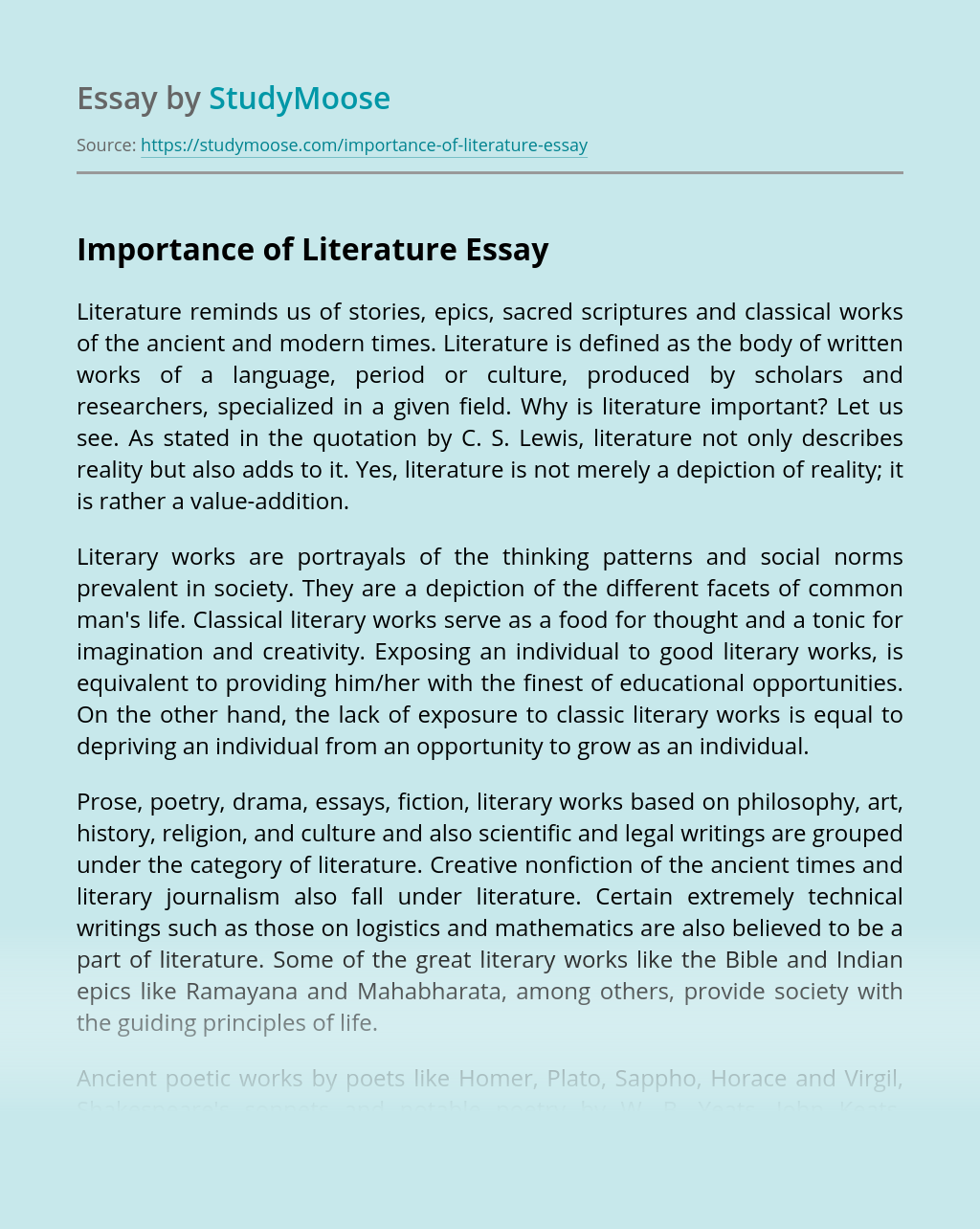 Don’t waste time
Get a verified expert to help you with Importance of Literature
Hire verified expert
$35.80 for a 2-page paper
Stay Safe, Stay Original