Importance of electrical services in buildings

Electricity has been part of our lives. It has brought many things that surely have made many wonders and life would seem so hard without it. Electricity powers our light, heating, electronic appliances such as computers and television, and a host of essential services that we take for granted. However, electricity has much more important aspects because it is a fundamental feature of all matter. Electricity is the force that holds together the molecules and atoms of all substances. The type of electricity that is most familiar to us is electrical current.

Don't use plagiarized sources. Get your custom essay on
“ Importance of electrical services in buildings ”
Get custom paper
NEW! smart matching with writer

This is the flow of electrical charges through a substance called a conductor such as a metal wire. This flow happens beacuse some of the negatively charge electrons circling the nuclei of the conductor’s are held loosely. The electrons can move from one atom to the next, producing and electrical current.

Electricity has become something we rely on to live our lives, but it was by no means an overnight discovery.

Over the last two hundred years it has developed from a scientific phenomenon to part of everyday life. One of the first applications of electricity was the first incandescent light bulb in around 1870.

The electric overhaul of society obviously brought many fresh new dangers with it, but it eliminated some of the old ones, like the naked flames of gas lighting that was commonly used in homes and factories then.

The Joule heating effect that can be found in light bulbs is also present in electric heating.

Electric heating has been thought of as wasteful in the past because in order to create that heat energy, heat has already been used in the power stations

Denmark (among a few other countries) has issued a new law restricting electric heating use in new buildings, if allowed at all. As well as heating, electricity provides a hugely beneficial source of refrigeration. As temperatures get hotter, the demand for air conditioning gets higher, increasing the amount of energy used, and so climate change is increasing in a snowball effect.

Electricity is of course used in telecommunication. The electrical telegraph was one of the earliest applications that electricity was used for, commercially demonstrated by Crooke and Wheatstone in 1837.

Importance of electrical services in buildings. (2016, Dec 05). Retrieved from https://studymoose.com/importance-of-electrical-services-in-buildings-essay 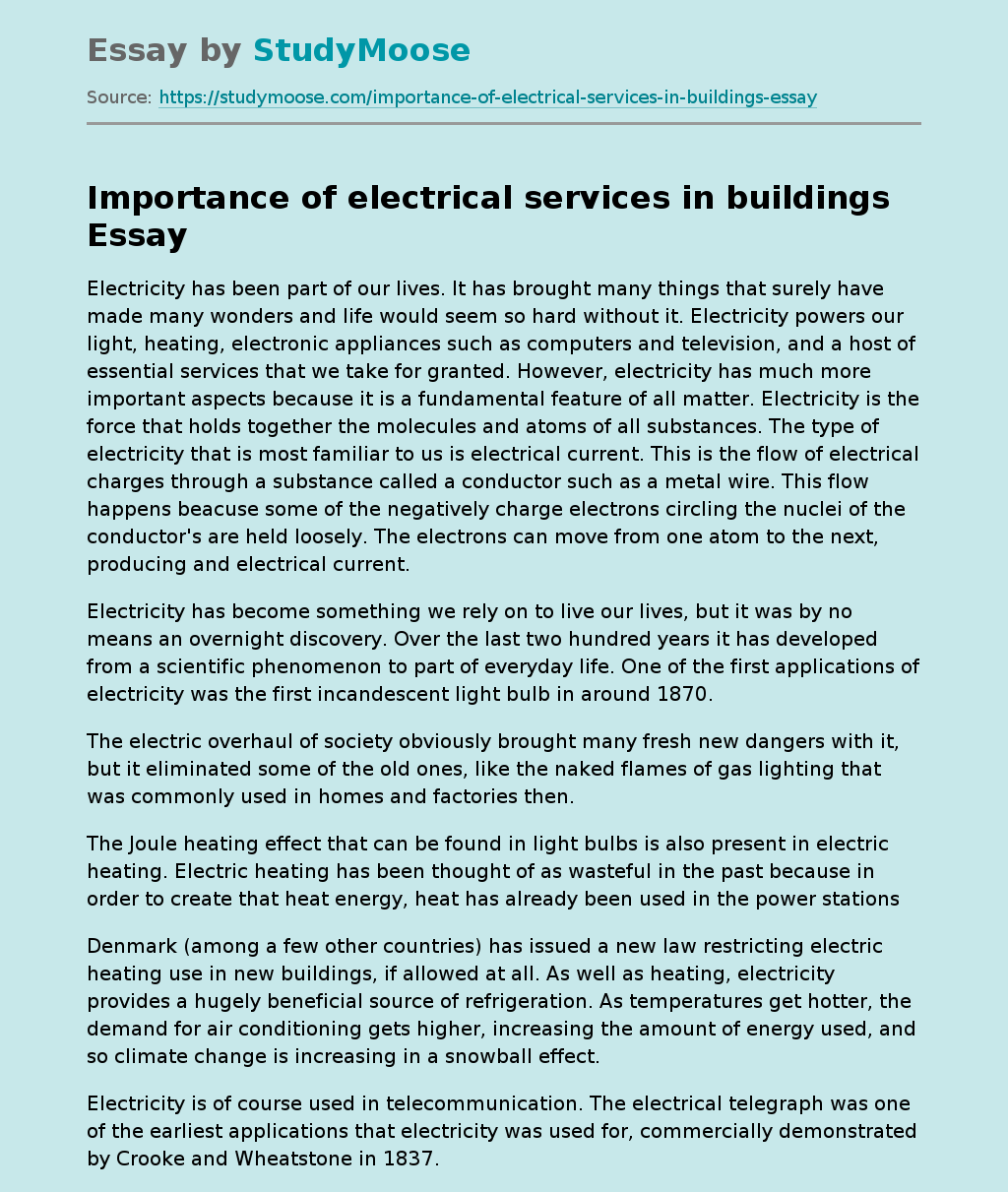