Importance of Carnival in Aphra Behn's The Rover

“Masquerading! A lewd custom to debauch our youth. There’s something more in this than I imagine.” – Don Pedro

Aphra Behn, the first female playwright to earn a living through her writing, was also one of the wittiest and entertaining as evidenced through her most well known play, The Rover. Set in 17th century Italy while under the colonial reign of Spain, a large cast of characters becomes embroiled in scenes of infidelity, seduction, misrepresentation, and elaborate swordplay, which create tension and confusion in addition to many comedic episodes.

Don't use plagiarized sources. Get your custom essay on
“ Importance of Carnival in Aphra Behn’s The Rover ”
Get custom paper
NEW! smart matching with writer

The setting is Carnival time in Venice, which is important to the plot for several reasons: the wearing of masks (as was customary) allows a freedom from normal constraints, there is often in the play a mistake made in identities, circumstances can (and do) occur which could never otherwise happen, it allows for a fast pace to be maintained which keeps the spectators involved, and ultimately, “confusion captures the spirit of the carnival” (1).

During carnival times class barriers came down with the rich mingling with the poor. The tradition of wearing masks at carnival time became necessary in order to protect the identities of the rich (2). This also gave opportunities to act out in a manner far removed from their habitual one. By having her female characters hidden behind masks, Behn is able to remove them from their traditional roles as women and give them empowerment. In effect, they can assume new personalities and remove their inhibitions or the otherwise usual yokes that have been cast on them by a male-dominated society.

Hellena is the perfect example of one throwing off inhibitions and revealing her inner self behind the guise of a mask. Slated for the convent in an effort by her father to consolidate the family finances, she decides that this carnival will be the time she finds a man – and she sets her sights on one as daring and quick-witted as herself. She is able to track him in different disguises and at one point sets out to “vex” him for his keeping with Angellica. She shows herself to be a strong, independent-thinking woman in an age when women had few personal rights. The carnival setting is the vehicle that gives her the freedom to behave in the manner she does.

The carnival setting is also the cause of mistaken identities. Because of this confusion Behn is able to further the comedic and suspense elements. For example, Don Pedro is denied his opportunity with the lovely Angellica when his friend (and his intended brother-in-law) Don Antonio pays his offering to be with her. Don Pedro is further incensed by the fact that this is a slight against his sister, Florinda, which ultimately leads to the setting of a time and place for a duel. Of course, Don Antonio believes he is confronting Belvile from his verbal exchange with Don Pedro. Ironically, when Belvile comes to the aid of Don Antonio later, he is charged with actually doing the crime of injuring him.

Unwittingly, Don Antonio presses Belvile into fighting for him against Don Pedro for the honor of Florinda, Belvile’s love! This is one of many instances when the characters end up in entertaining situations due to mistaken identity. The mistakes made by the characters often misidentifying each other has an added effect of the audience having to pay especially close attention themselves to how the plot develops.

Since all of the action occurs during Carnival (especially Venetian), the audience naturally expects some kind of confusion and mayhem to occur. This chaotic environment keeps the pace quickened making the carnival setting a natural choice for a swift paced play. Traditionally, carnivals of this kind “would take place in the various Venetian piazzas and would involve meals of imported delicacies, dancing and entertainment by jugglers, acrobats, etc. as well a feats of strength or daring, performed by young men, and usually resulting in being plunged into the freezing waters of the canal.”(2). With the goings-on throughout the city during Carnival, the play (as the spectators expect) would naturally exhibit the same impulsive atmosphere of gaiety and rapidity of movement that occur during carnivals.

The play is also making a forward statement for its time and can because of the particular nature of the carnival. Through Hellena, Behn is speaking for women’s equality. Hellena while disguised is as courageous and outspoken as any man of the period. She is able to act as men do – choosing a mate as one would livestock. Another unspoken assertion Behn makes is of the treatment of women who were not privileged. Repeated attempts at raping Florinda because the men thought she was of a lower station don’t put men in a good light.

The attitudes of these men are that this is accepted practice and tolerated in 17th century society. Undeniably, it would seem as if they saw it as their right. Finally, while most men would look at Willmore’s cavalier attitude and behavior with what one might call reverence (who wouldn’t want to be a swashbuckler?), his lying, deceitfulness, and womanizing ways are not qualities that cause one to shine. These things along with the women’s sexual audaciousness would cause this play to be denigrated in the next era.

In conclusion, Behn’s choice to place the action of the play in Venice during a carnival was appropriate to the theme. Indeed, one could argue that without the carnival as a backdrop, Behn could not have as effectively pulled off the character’s relationships and the myriad encounters nearly as well. The characters actions speak as much if not more than their words do and the speed of the play is determined by these actions. This could only have been achieved by the confusion and spontaneity inherent in the nature of carnivals. Thus, the importance of Carnival in Aphra Behn’s The Rover was paramount to the success of the play.

Importance of Carnival in Aphra Behn's The Rover. (2016, Jul 02). Retrieved from https://studymoose.com/importance-of-carnival-in-aphra-behns-the-rover-essay 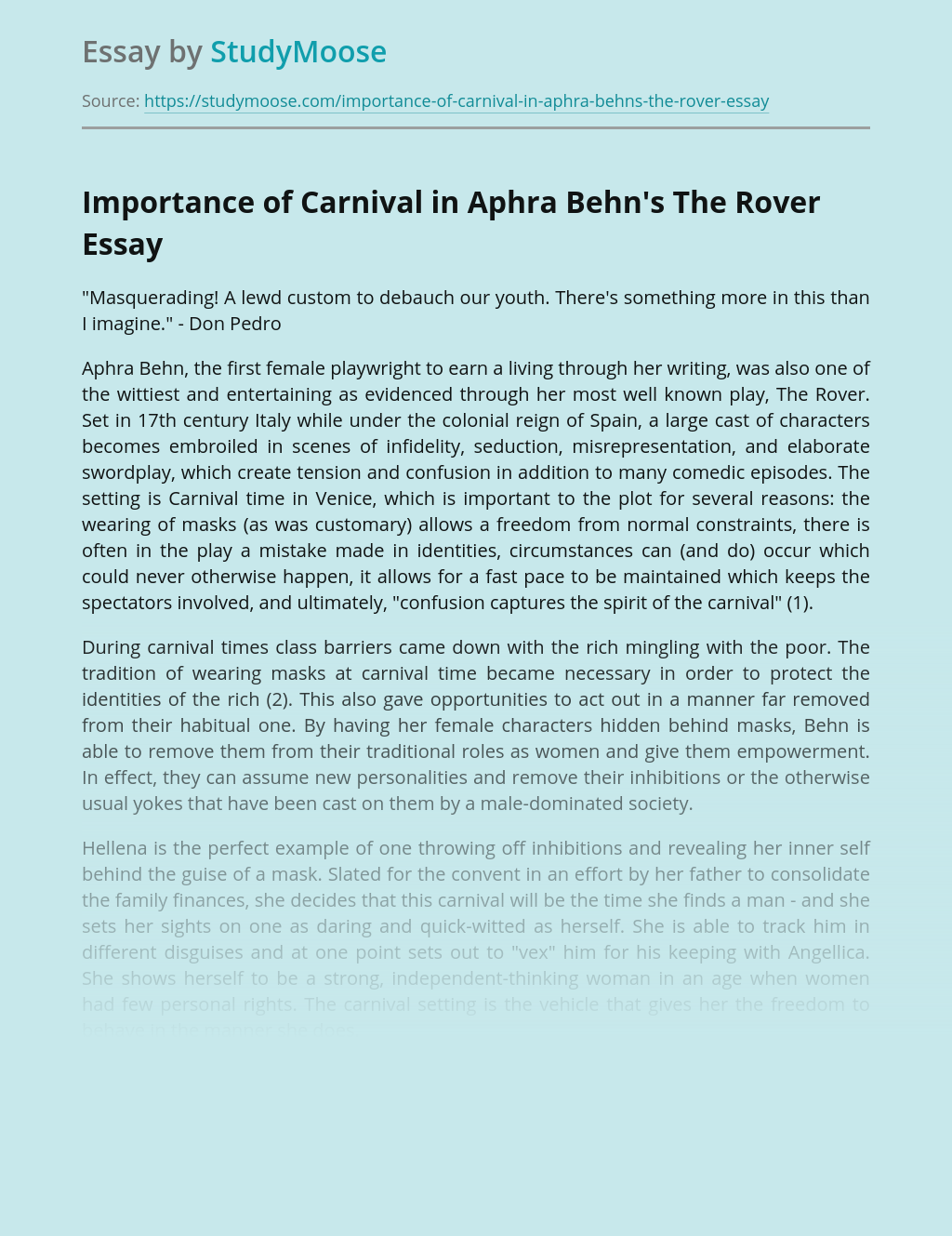