Imagine a world without food. Without restaurants, grocery stores, or convenience stores. Imagine children lying in the middle of the streets because they’ve gone days, even weeks without eating anything. Imagine waking up every morning and going out to scavenge for food, because it isn’t available anywhere commercially. Imagine living without your morning coffee or your after school snack. I’d bet this is very hard for you to imagine. Almost everything that we eat or consume is all thanks to agriculture.

Don't use plagiarized sources.
Get Your Custom Essay on Importance of Agriculture Informative Speech Just from $13,9/Page

To make up for these shortages, people began to plants crops to supply them with the food that they needed. Some people also theorize that agricultural production was driven by figures of great power, who would throw feasts to show their dominance over others. Also, as population density grew higher, so did the production of food to supply the population. The Middles Ages was a time of great agricultural improvement for Europe. Draft horses were bred to work plows and do other types of work. The scythe and plow were invented in Europe, as well as the development of crop rotation.

Because of Europe’s higher population density, there was lots of extensive farming to supply the people with food. India brought the domestication of crops such as barley and wheat, as well as beginning to raise livestock such as sheep and goats. In South America, the major crop was the potato, but many types of beans were developed as well. South America also began the trend of llamas and alpacas used as livestock. The natives of early eastern North America also were known for growing many crops, such as sunflowers, tobacco, and some varieties of squash.

The introduction of machinery during the industrial revolution brought with it the tractor, the combine, and many other types of farming machinery. These new tools allowed farmers to produce and harvest crops at a rate previously thought impossible. The development of railroads and other types of long distance travel have also aided the agricultural revolution in its massive growth. Now that we have looked back at the history of agriculture, we will now examine the role agriculture plays in our society, and its importance.

What do you think of when you picture agriculture? Do you imagine a farmer in denim coveralls holding a pitchfork, or an old guy in a tractor going through fields? This misconception of agriculture has greatly affected its reputation in today’s society. The FFA creed begins with the words “I believe in the future of farming with a faith born of not words but deeds. ” Agriculture is important because our farmers actually get things done. Agriculture is one of the oldest activities known to humankind.

Without today’s farmers, we wouldn’t have food. Without agriculture, we would all be forced to scavenge for food, rather than buying it from the grocery store. But even more than food, agriculture also provides us with clothing and shelter. Wool is spun for sweaters, trees are chopped down for lumber, plants are made into medicines. Fruits and vegetables, herbs, meats, even dairy products. All of these somehow stem from the soil that covers this very earth. And unfortunately, these things aren’t just simply readily available to us.

We need farmers to grow and produce them for the use of today’s society. Clearly, agriculture is a very large part of our lives. Now that we have looked back at the history of agriculture and examined its importance, we will clean our plates and look into agriculture’s future. As the world’s population continues to grow at an alarmingly fast rate, resources will most definitely become limited in the very near future. Therefore, the first duty of farmers will be to maintain and preserve those resources for generations to come.

The population is expected to more than double by 2050, which is all too scary, since the earth only has limited land. There has been lots of controversy as to whether industrialization, agriculture, or wildlife preservation will take precedence. Even today farmers are still developing new technology to increase rate of crop production and the overall effectiveness of current farming methods. Today, even the youngest people are taking steps to harness agricultural opportunities. Many organizations are out there, including FFA, 4-H, and many more.

FFA is a great thing, because it helps today’s students prepare for a future where agriculture will be bigger than it ever has been before. FFA also teaches high school students leadership, responsibility, and even friendship. 4-H aims even younger, with members as young as kindergarten or first grade learning the importance of agriculture early in life. Today we have set the table and looked back at the history of agriculture. Then, we dug in to the importance and impact agriculture has on today’s society. Finally, we cleaned our plates and looked forward into the future of agriculture. 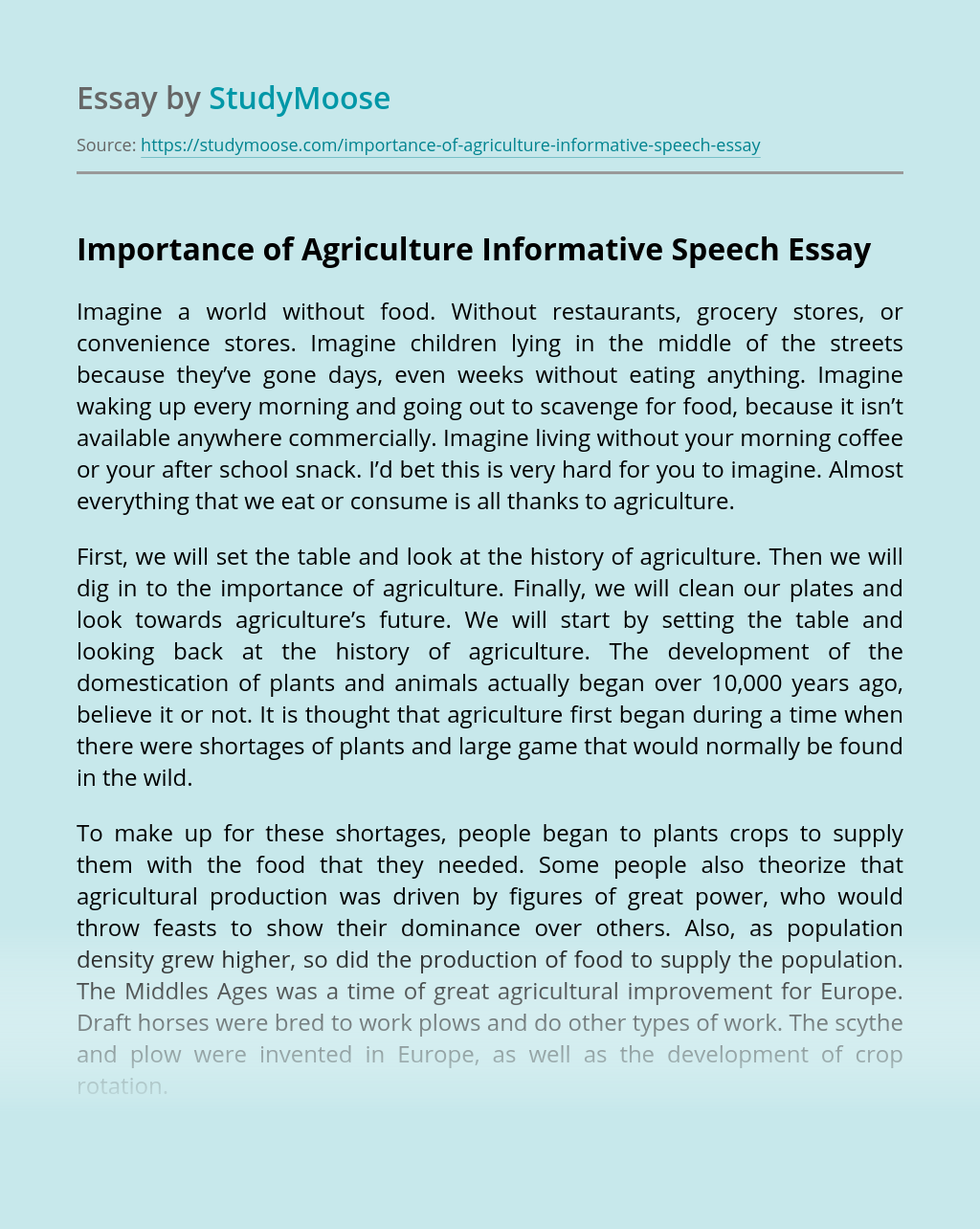 The Myth of the Latin Woman

Cultural conflict as a Hispanic American female is fueled by multiple complex variables. For a typical Hispanic girl living in America the choice of food, clothing, customs, and beliefs are fueled by family traditions and often twisted by American media. Traditional Hispanic girls, speak Spanish, eat Puerto Rican food, confess their sins to a priest...

Cisco Systems, Inc. is a global company that embodies the many characteristics of a company that values its employees as much as its clients. Cisco listens to their employees and responds to their needs. Cisco Systems has long been recognized as being one of the top 25 best places to work in America because of...

Get Essay
Cultural Analysis of Saudi Arabia and New Zealand

In terms of cultural dimensions, basically, culture elements are everywhere in our life no matter where are you from. Also, the uniqueness and differentiation of culture in diversified countries are influencing and fulfilling our large communication community—world, people involved in this harmonious place communicate, share ideas, cooperated and integrated every cultural diversity so as to...

Cultural Diversity: Different Worlds; Same Stories America is a vast, multicultural land, with many different people and many different ways. But still, we tend to categorize whether something is abnormal or not based on certain cultural standards, i. e. , “ethnocentrism”. This makes for a large gap in understanding cultures such as that of the...

Before I begin discussing these two topics, we must fully understand what they mean. The definition in the dictionary states that, multiculturalism consists of, relates to, or is designed for the cultures of several different races. Whereas the word melting pot is not a term used in the dictionary. For the purpose of this assignment...