Importance and uses of contrastive linguistics

Contrastive Linguistics, roughly defined as a subdiscipline of linguistics which is concerned with the comparison of two or more (subsystems of) languages, has long been associated primarily with language teaching. Apart from this applied aspect, however, it also has a strong theoretical purpose, contributing to our understanding of language typology and language universals. The study of two languages in contrast, here called contrastive analysis, has been referred to by a variety of names, not all of which mean the same to all writers.

Don't use plagiarized sources. Get your custom essay on
“ Importance and uses of contrastive linguistics ”
Get custom paper
NEW! smart matching with writer

Contrastive studies mostly deal with the comparison of languages that are ‘socio-culturally linked’, i.e. languages whose speech communities overlap in some way, typically through (natural or instructed) bilingualism . Much progress has been made in classifying the languages of the earth into genetic families, each having descent from a single precursor, and in tracing such developments through time. The result is called “comparative linguistics.” Of even greater importance for the future technology of thought is what might be called “contrastive linguistics.

Relevance and uses of contrastive linguistics:
The relevance of CL to translation:
The emphasis of much of the work on CL on teaching and language learning raises questions about its relevance to translators. At a practical level, it is probably most useful in pointing out areas where direct translation of a term or phrase will not convey accurately in the second language the intended meaning of the first. At a global level, it leads the translator to look at broader issues such as whether the structure of the discourse for a given text-type is the same in both languages. Furthermore, although Contrastive Analysis is widely practised, there are a number of theoretical and practical problems in its application, all of which must affect judgements as to its usefulness in preparing or evaluating translations. There is some overlap between these problems, but they can nevertheless be related to specific difficulties of identifying a common ground for comparison, comparing descriptions of different languages, taking account of psycholinguistic and sociocultural factors, and taking account of extratextual and intertextual factors. Identifying a common ground for comparison

All comparisons require that there be a common ground against which variation may be noted, a constant that underlies and makes possible the variables that are identified. Fonnal similarity is unreliable for several reasons. In the first place, a particular grammatical structure in one language may be a requirement while in another it may be one choice amongst several; in the second place, the choice represented by a grammatical structure in one language may have a different significance in that language from the choice represented by an apparently equivalent structure in another language .in the third place, in one language a particular structure may be unmarked while in another it may be marked. A pair of sentences might be semantically and/or pragmatically equivalent but have widely varying likelihoods of occurrence in the languages from which they are drawn. A simple example of all these points is that of the Portuguese expression “muito obrigado/a and the English expression much obliged. These are syntactically and semantically comparable but have a different likelihood of occurrence, muito obrigado/a being the normal way of thanking in Portuguese and much obliged being a rare and more restricted usage than thanks a lot (and other related expressions) in English. Comparing descriptions of different languages

Apart from the real but unavoidable problems arising out of comparisons of descriptions that utilize different linguistic models, there are problems that arise even between descriptions that utilize the same categories and theoretical framework.Understanding between and among disparate cultures has challenged mankind throughout history; and clearly, communication, intercultural communication, is a key element in achieving understanding. We believe a disciplined, linguistic approach to the study of intercultural communication, an approach that includes the building of linguistic corpora, research in contrastive rhetoric, and practical, real life application of the best practices learned, can provide valuable insights toward achieving understanding among cultures The relationship between contrastive analysis and translation The relationship between CL and translation is bidirectional. On the one hand, the translation of specific pieces of text may provide the data for CL On the other, CL may provide explanations of difficulties encountered in translation.The crucial factors here are what size of language sample has been chosen for translation, whether it is naturally occurring or fabricated for the purpose, and whether the translation is the analyst’s own. Though the focus of CL may continue to shift towards pragmatics and discourse analysis, its use in translation is not inevitable. It is however unlikely that it can be dispensed with completely either in the training of translators or in the assessment of translations, even in its more traditional lexico-grammatical manifestations; CL has arisen as a result of the needs of the language teaching profession and this project is no exception in that one of its major objectives is to provide teachers with assistance in the use of parallel concordancing in the classroom.It gives valuable evidence for translators on the transferability of certain collocations and colligations from one language to another. The future of CL’s use in translation may well lie in projects such as this, which are capable of providing with equal facility explanations of past translating decisions and guidance as to prospective ones.

As a useful learning tool:

Knowledge and understanding of languages is increasingly important, and this course focuses on how such knowledge can be applied. It helps learners know more clearly and finding similarities and differences between them, thereby detecting errors, which bilingual learners often make, and how to fix. This assignment is based on contrastive linguistics. It uses many methods, especially contrastive method and surveys on grammatical aspect of these words. This study uses one-way transfer. We find a lot of two languages’ differences which may be make errors in structure and semantics. It is useful for bilingual learners to find mistakes which they can meet. Contrastive linguistic gives a comparative method to translate a learner’s thinking in an informed way. Giving structure to his/her intuitive relationship to the language. This bilingual approach in cl saves the students’ infinite time and labour. It has been proven that students learn faster and more effectively using it.Since it is our nature to compare, Contrastive Linguistics is the technique that clarifies our understanding of the language. For learners, similarities between languages cause no difficulties, while differences cause interference to learning. Through Contrastive Linguistics we can target and resolve the typical difficulties and Common Mistakes of our students. We can examine aspects that would not normally be noticed without such comparison. Bi-lingual comparative courses overlap in fruitful collaboration with other approaches. They clear away students’ deep-rooted mistakes and empower teachers with the answers to many of their students’ doubts.

Importance of CL due to growing demand:

There is a growing demand from both public and private sectors for professionals combining excellent language skills and sound linguistic theory and methodology. You study linguistic theory, description and methodology with a particular focus on corpus approaches and a strong multilingual component with high relevance for language professionals, especially in the field of foreign/second language learning, teaching (and testing), linguistics focusing on usage-based models and methods in language research and their applications, especially in multilingual contexts. It help students acquire the ability to read, write, speak, and understand world languages reach maximum capability with respect to communications, effective reasoning, and analytical thinking; to educate students for living and working in a competitive global society.. As the field of linguistics became more accepted as a discipline, other scholars from different fields began to incorporate language-related topics into their work. Contrative Linguistics found its way into sociology, anthropology, language arts, foreign language learning and teaching. It helps the translators to analyse the basic meaning and gist of the second language giving them an edge in interpretation jobs .

Importance and uses of contrastive linguistics. (2016, Mar 08). Retrieved from https://studymoose.com/importance-and-uses-of-contrastive-linguistics-essay 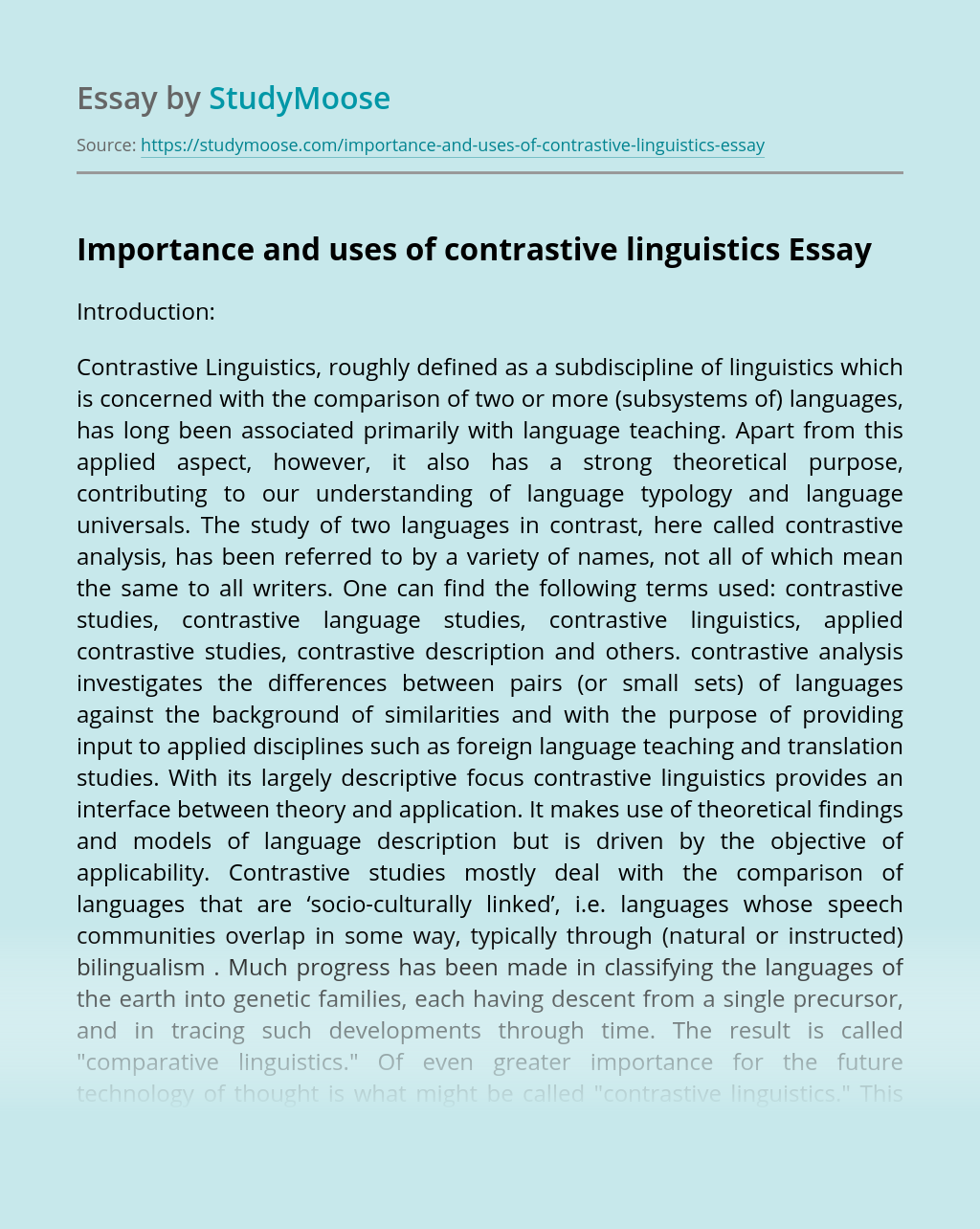