Importance of Agriculture in Argentina

Argentina is a developing country. In developing countries there are more primary jobs than there are of tertiary and secondary jobs. Examples of primary jobs would be fishing, mining and farming. In Argentina farming is the fastest growing business, especially organic farming. The reasons to this are because products are being made in the country that do not need to be fertilized to grow. This obviously makes it very cheap for the people farming there. Another reason for this business growing so fast is because Argentina has devoted most of its land to growing organic crops to export and for local consumption.

Don't use plagiarized sources. Get your custom essay on
“ Importance of Agriculture in Argentina ”
Get custom paper
NEW! smart matching with writer

Argentina exports cereals, honey, sugar, oil, herbs, meat and juices. They are one of the world’s biggest meat and wool producers. They are also the ninth largest cotton producers. The country produces so many things that the economy of Argentina relies a lot on the agriculture

Agriculture is very important for Argentina because by growing crops and exporting them to different countries they are making money.

The other farm types are subsistence farming where the people only produce enough to fulfill their own needs and have very little to sell for profit.

These climate changes also cause other problems for Argentina such as reducing 6 – 10% amount of nitrogen in the soils. They also reduce organic carbon by 7-20%. Without the nitrogen in the soil there is no nutrients in the soil. Resulting in the plants dying. In order for your crops to grow in Argentina you must have a lot of nutrients. Soil erosion can also occur if the soil is very compact and the water is not able to infiltrate If the water does not infiltrate there will be a lot of surface runoff, the water will travel down and wear away some of the land.

To explain this topic better we can divide Argentina into four parts according to their zonal areas i.e. North, South, West and East. In the west there is the Andes which has many mountains and is in the Lake District. This is not a very good place to farm because the relief here is very high and there are not many nutrients in the soil. Also if there are many mountains it means the place has steep hills. In the north there is the fertile lowland with tropical rainforests. This is a very good place to farm because there is low relief and the soil has lots of nutrients in it. Another thing is that the land is low and it is not steep like the Andes. The east, which is called Pampas, is a dry humid flat land. This is good because the land is flat and the soil of this place is very rich but the temperature is not good for any type of crop to grow. In the south there is Patagonia this again is another mountainous place, which is not the ideal place for farming.

In the Pampas soybeans have recently been doing really well. The reason for this is because they have introduced two new techniques in improving the growth of soybeans and stopping soil erosion. One of the ways they improved the growth was by direct seeding and the other one was the introduction of herbicide resistant soybeans. Direct seeding meant that people would put the seeds directly into the soil without ploughing it first. Herbicide resistant seeds were put in the soil so that it would stop weed from growing. Both of these had their advantages but they had many disadvantages as well. They were successful in reducing soil erosion but they had other problems such as diseases, pests, weeds were growing and reduction of nitrogen and phosphates in soil.

Transportation in Argentina isn’t a very big problem. In fact Argentina is known to have really good transportation when compared to other countries in South America. The road network is very good so the people can use the buses or the trains to travel. This way the farmers would not have such a big problem in transporting their goods to the market. For some of the agriculture products are transferred to lorries so they can be transported to the market.

The main crops that grow in Argentina

Importance of Agriculture in Argentina. (2020, Jun 02). Retrieved from https://studymoose.com/importance-agriculture-argentina-new-essay 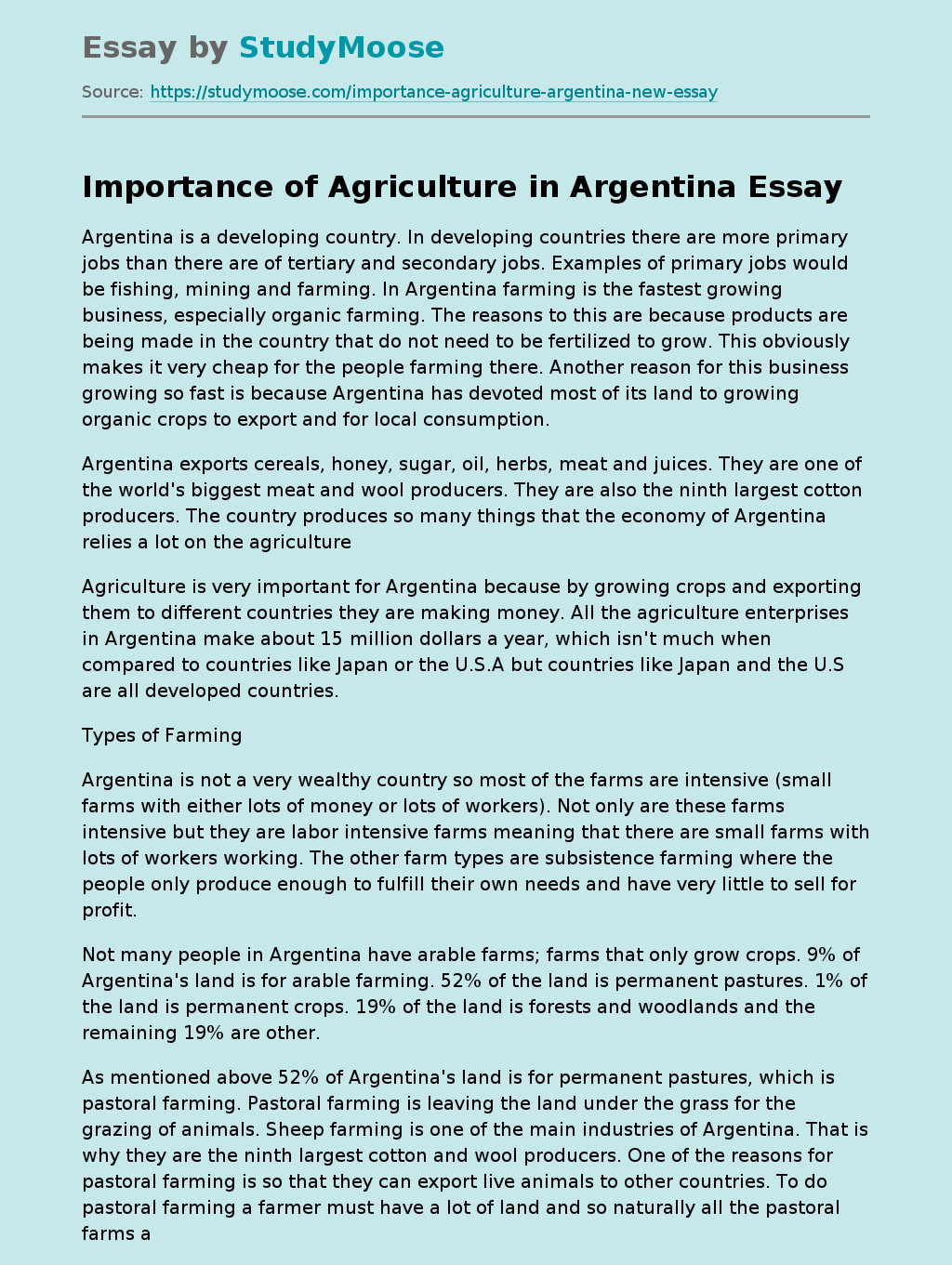