Imperialism In Africa and Colonialization of Kenya

Colonialism occurs when one nation takes control of another. And that is exactly what happened when the British arrived in Africa. The people of Africa had no idea that the British was taking and had taken their land. But, with that being said the British are who had help develop Kenya by bringing them some of their viewpoints from Great Britain. These viewpoints did a number of things to the people Africa. They changed the way they were politically, economically, and even culturally (religiously).

Turn in your highest-quality paper
Get a qualified writer to help you with
“ Imperialism In Africa and Colonialization of Kenya ”
Get high-quality paper
NEW! AI matching with writers

The culture or religion of Africa was a very diverse. They all had their own beliefs and myths about how the creation of everything came to be such as the Abaluyia creation story, where it says that god created man so that the sun would have someone to shine on (Doc 7). The British did not really understand this, given the majority of them were either Protestant or Catholic. They couldn’t comprehend the idea of believing in witchcraft or witch doctors, or how each tribe had a concept of a “Supreme Being” (Doc 6).

The education of Africans was provided, even though it was not compulsory, with 3,442 schools (Doc 10).

In total, there were 395,000 students that attended these schools (doc 10). And within 50 years there was a substantial amount of growth in both Railroad and Road networks throughout Kenya (Doc 11). The cause for the majority of economically growth came from all the raw materials and cash crops that were being sold and produced for Britain. Politically, there were differences amongst both the people of Kenya and the people of Great Britain. When the British came and announced that the people of Africa now had a new king to serve under and that their land was his, the people were confused (Doc 3). The people could not understand how this foreign king was now their king and how the land that was passed down from their fathers’ father, now belonged to this stranger of a king (Doc 3). Most Africans learned to except the fact that they were now part of a colonial state, no matter how much they despised it (Doc 4). There was even some Kenyan headsman/chief who assisted the British legislative council that who ruled Kenya. After the First World War though, Kenya started to become harder to rule and control, and soon by the time World War II ended the control the British had was gone.

The colonization of Kenya is what made Kenya what it is today. And with the help of the British they were able to make the people of Kenya more civilized and developed. The British had altered their perception on how things should be, on how they should be. And their viewpoints gave them insight and had changed the way that they had been, politically, economically, and culturally.

Imperialism In Africa and Colonialization of Kenya. (2016, Mar 06). Retrieved from http://studymoose.com/imperialism-in-africa-and-colonialization-of-kenya-essay 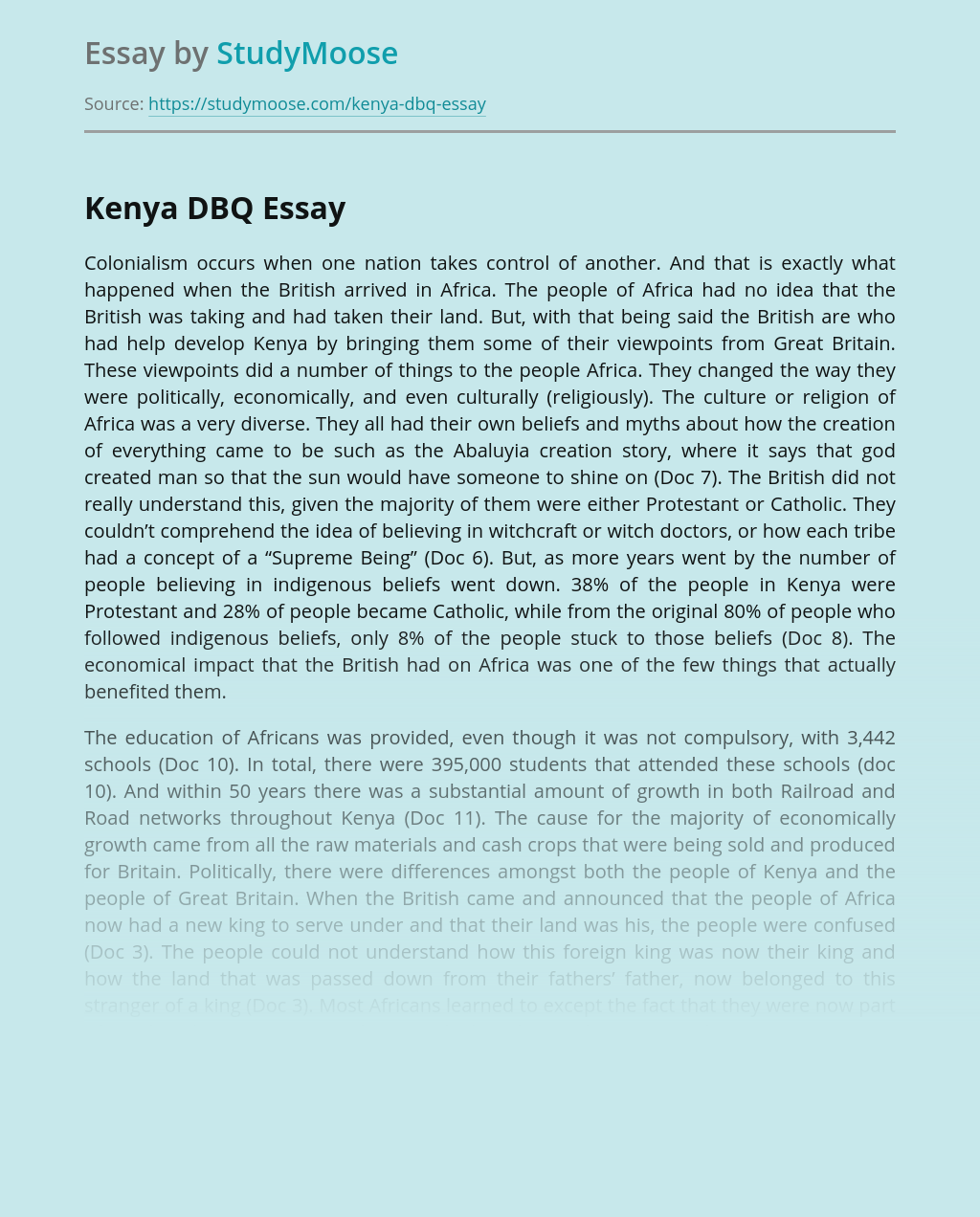 Turn in your highest-quality paper
Get a qualified writer to help you with
“ Imperialism In Africa and Colonialization of Kenya ”
Get high-quality paper
Helping students since 2015
Stay Safe, Stay Original