Impacts of the Sixties Counterculture on History

Hippies represent the ideological, naive nature that children possess. They feel that with a little love and conectedness, peace and equality will abound. It is with this assumption that so many activists and reformers, inspired by the transformation that hippies cultivated, have found the will to persist in revolutionizing social and political policy. Their alternative lifestyles and radical beleifs were the shocking blow that American culture– segregation, McCarthyism, unjust wars, censorship–needed to prove that some Americans still had the common sense to care for one another.

Don’t waste time
Get a verified expert to help you with Impacts of the Sixties Counterculture on History
Hire verified expert
$35.80 for a 2-page paper

The young people of the sixties counterculture movement were successful at awakening awareness on many causes that are being fought in modern American discourse. If not for the Revolution that the hippies began, political or social reform and the People’s voice would be decades behind.

While the hippie movement has subsided, as it became too “cool” and entrenched in mainstream society, the spirit of the Hippies lives on, as their work was only the framework for decades of reform to come.

The work that hippies did, hand in hand with African-Americans, was very powerful in striking the discourse on racial equality in the US. Demonstrations reached their inspirational peak in 1964 when Dr. Martin Luther King Jr. marched with 250,000 people in support of civil rights and racial equality. They were successful politically with the passage of the Civil Rights Act. The fight for equal rights has not been won, however, as most of the hippie’s battles continue to be fought by the veterans and new recruits of the movement.

Racism and inequality ensue today as the discrimination, prejudice, and hate crimes occur at an alarmingly frequent rate. Rita Sehti, in The State of Asian America, explains that “media sensationalism, political expedience, intellectual laziness, and legal constraints conspire to narrow the scope of cognizable racism” (Sethi). But it is still a problem of extreme magnitude in America, being fought more often in courtrooms than campus protests. Groups like ACLU (American Civil Liberties Union), EEOC (Equal Employment Opportunities Council), and ARA (Anti-Racist Action League) have come into force thanks to the social reform of the sixties counterculture. Organizations such as these continue to foster great changes in civil rights and equality.

The sexual revolution of the sixties was truly a woman’s revolution. Women were given the choice of getting pregnant for the first time in history. The value of this freedom was much more signifcant than controlling pregnancy, however. It represented female empowerment and gave women a long needed boost toward the fight for gender equality. Hippies, hand in hand with conformist women, protested and battled for equal wages, abortion rights, academic equality, discrimination, family and abused women aid, and much more. The progress the activists made for women’s rights in the 1960s is unparalleled and monumental.

It is now 2004. For the first time in history, the 1972 Supreme Court ruling on Roe v. Wade is being challenged by American government. This court decision gave women the right to choose to end a pregnancy. The Bush administration’s Christian fundamental values are infringing on the Constitutional values of America. On April 25, 2004 there is to be a national protest march on Washington DC for women’s rights. This is to be the largest women’s rights protest in world history. Its’ organizers, participants, and sponsors hope that the demonstration will speak to the American people, legislators, and media the way the feminist movement of the sixties has.

As people began to recognize their relationship to each other and their environment in a new way, a heightened Earth Consciousness was born. Concern for the environment grew because hippies saw the Earth as wat it is–a loving Mother Nature that provided for and nourished their very lives. They pioneered the ongoing and tough battle to save the earth with the founding of Earth Day, Rachel Carson’s Silent Spring, and groups like Greenpeace. Environmentalists host one of America’s largest political lobbies. Groups such as Greenpeace protest with millions of members worldwide on issues ranging from destruction of rainforests, oil companies, nuclear wastes, Greenhouse effect, and biodiversity.

Recently Ralph Nader spoke to an enthusiastic and supportive audience at Columbia College. Nader spoke about the very same issues he lectured about in 1968–corporate rule, environmental protections, military-industrial complex and unjust wars, equality and access to education, women’s rights. It was an increased awareness that overtook the young people of the sixties counterculture movement. This awareness led to a social outcry against injustices in politics.

The hippies, hand in hand with college students, helped stop an unjust, costly, and deathly war in Vietnam. The hippies had the courage to speak out for the 67% of Americans that were opposed to the war. An anti-war movement not unlike the Vietnam protests has progressed over the past two years against the War in Iraq. March 20, 2003 was a national day of protest with over 25 million protesting the worldwide-disapproved occupation of Iraq. Seven-hundred were arrested in Chicago as the protesters marched on Lake Shore Drive. NION (Not in Our Name) is a prominent organization formed post-9/11 that organizes, educates, and demonstrates through direct action against the unjustified Iraq war.

The hippie movement was comprised almost entirely of youth (the 18 to 30 year- old demographic). In an unprecedented and organized fashion, these young people united to make positive changes in the world. Youth have a powerful voice in numbers as parents, schools, and governing institutions wish not to have too much fuss in their daily lives. After the disasters at Altamont and Kent State University, some of the strength of the movement faded. But not for long. Today college students play a huge role in legislation reform. Groups such as SSDP (Students for Sensible Drug Policy) and YIRP (Youth in Revolutionizing Politics) have been succesful in gaining media and political support in increasing awareness of American political issues which affect the world.

Hippies grew up. Therein lies one major problem with the movement. The members of the counterculture were optimistic, idealistic kids. Many of them impressionable teens with a desire to conform to some group of peers. But after the fatal blows to the unity of the hippie tribes–Kent State massacre, mass arrests and assasinations of revered leaders and activists, government censorship, rock n’ roll overdoses, an influx of shady, greedy characters into the hippie community, legislation (building codes prohibiting hippie communes and open houses; anti-vagrancy laws) and so on–many of these kids matured as adults and adopted totally contradicting lifestyles.

Karen Thomas, longtime Chicago hippie activist and drug law reformer, tells of a time when she was working as an accountant at the Board of Trade. Many of her colleagues and stock trader “suit- types” told of the jolly times at Woodstock and smoking grass and the GroovyLoooveDayz. This utter and embarassing 180 of lifestyles showed the Conservative world that hippies were indeed a bunch of idealistic kiddies who would one day grow up. They are now working for the very companies they protested against for violations of human, environmental, women’s and animal rights. The irony of the grown-up hippies is damaging today, as it discredits future youth, counterculture, social, politial, and rebellious movements.

There are some obvious flaws in the countercultures’ approach to sparking a political revolution. In some ways the philosophies of the movement were far too broad to provoke any sort of lasting change. One must pick their battles wisely if they are to make any timely progress in legislation reform. “Real love”, rising of the consciousness, and enlightenment are great for some. But it takes a bit more than a peaceful nature and groovy hair to convince those legislators in D.C. that what they are doing is wrong. Hippies never provided any long-term alternatives to the evil system they were fighting, just colorful short-term ones.

It is not far off to imagine that many hippies felt drawn to the idea of protesting for cause of impure motives. Perhaps they were drawn to the excitement, the glory of speaking before an enthusiastic crowd, and the prestige of recognition in the scene. Allen Ginsberg once lamented that too many of the protesters in the sixties seemed to be doing it because it was a good excuse to be spiteful. Many hippies had uncontrolled anger and emotion that interfered with the clarity of their message. Long-time organizer Saul Alinsky, in his book Rules for Radicals, asks if you are willing to cut your hair to make yourself more effective. That is a pretty good indication of an activist’s level of sacrifice and dedication.

The hippie movement both amused and scared parents, educators, police, and government officials. They closed in on the hippie movement once and for all with the Draconian drug war launched by Richard Nixon in 1969. His administration arranged for an unprecedented amount of federal budget to be applied to cracking down on marijuana arrests. The drug war was used as a crutch to stop the hippie movement dead in its’ tracks. And it has done a pretty good job, with over five million marijuana arrests over the past decade! (Sidenote: Ninety percent of these arrests were for nonviolent, simple posession charges).

Impacts of the Sixties Counterculture on History. (2016, Jul 09). Retrieved from http://studymoose.com/impacts-of-the-sixties-counterculture-on-history-essay 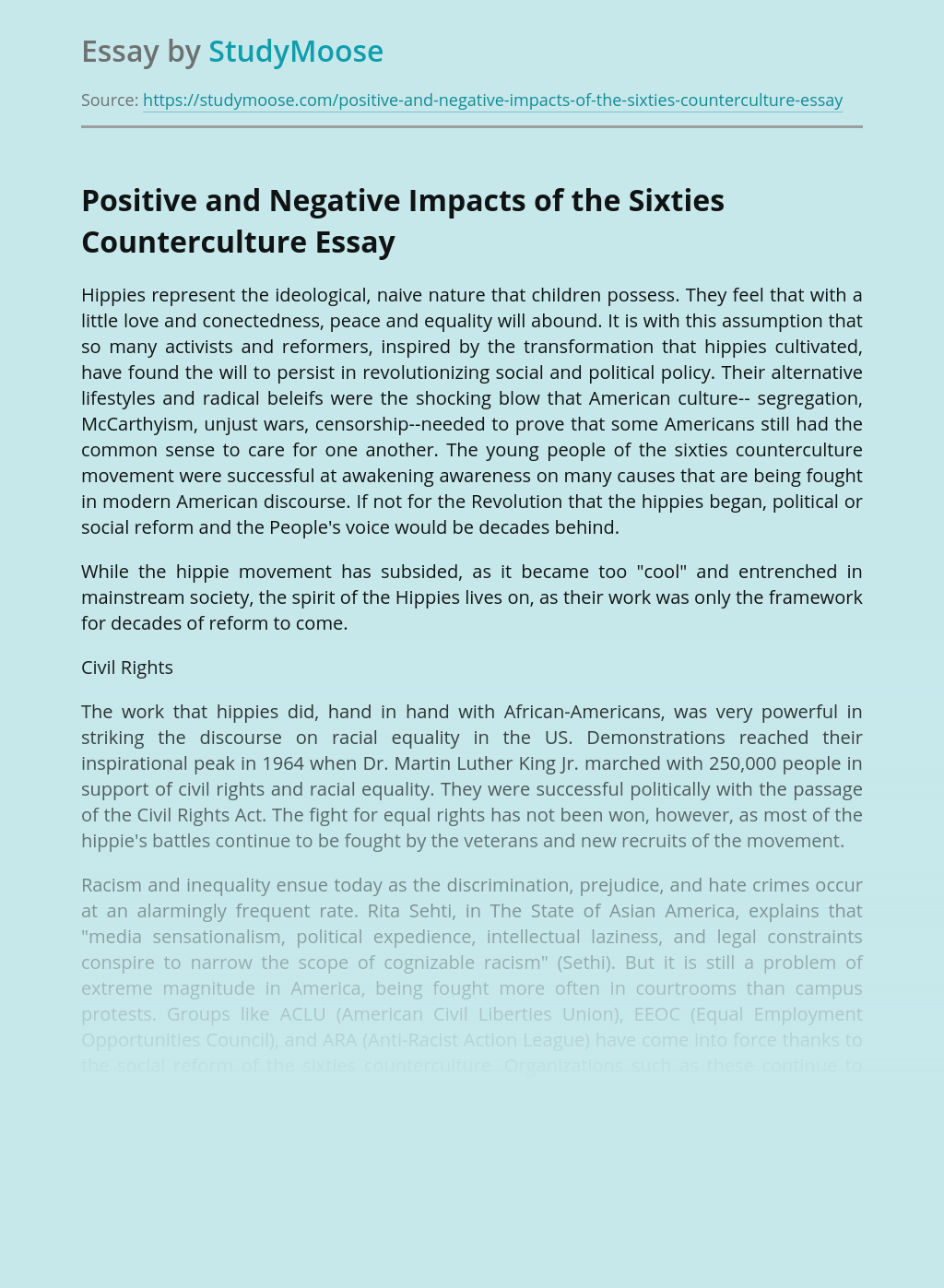 Don’t waste time
Get a verified expert to help you with Impacts of the Sixties Counterculture on History
Hire verified expert
$35.80 for a 2-page paper
Stay Safe, Stay Original