Impacts of Internet to Youth

The Internet is a household word in the West and is responsible for the wide dissemination of information all over the world. It is perhaps the greatest invention of the 20th century and gives great power to its users; with great power comes great responsibility, especially for youths.

The Internet is a new medium for distributing information. It has its own culture, its own way of communicating, no law enforcement, no national boundaries as well as free access to every kind of information known to mankind.

Don't use plagiarized sources.
Get Your Custom Essay on Impacts of Internet to Youth Just from $13,9/Page

Its potential for good and evil is mind-boggling with the possibility of every household being connected. After the September 11th attacks on the United States, it was rumored that Bin Laden’s Al Qaeda organization used the Internet to covertly exchange messages to prepare for the attacks [Kelley, Jack. Terror groups hide behind Web encryption. USA today. 2001.05.20. Available on life. http://www.usatoday.com/life/cyber/tech/2001-02-05-binladen.htm].

But the Internet has so far mainly served as a very valuable tool to bring mankind closer together and to remove some of the barriers inherent in the “real” world (such as expensive textbooks and far distances to travel to see someone).

It has had a great impact on those countries that have adopted its use and provides some kind of measure of the gap between First World and Third World countries. But what exactly is the Internet? And what are some of its uses? And what are its impacts to the society especially youth?

1.2 STATEMENT OF THE PROBLEM

Many computer literate children and youth access the Internet daily for both educational and recreational purposes. While the Internet provides a wealth of positive information, there has been increased awareness of its potential dangers, especially to young people. To address concerns surrounding Internet safety, in 1999 the Internet Safety Group of New Zealand was established. The Internet Safety Group is comprised of a number of Community groups and government agencies. Their objective “is to offer Schools and libraries resources that will help them educate and protect children and Young people, and educate parents/caregivers on the safe use of the Internet.” (Internet Safety Group, 2000, p.3). There has been much discussion to date about the ‘unsafe’ Internet practices of youth. Empirical research in this area is however limited. Auckland Rape Crisis, as a member of the Internet Safety Group, wanted to increase their knowledge and understanding of how youth use the Internet, and more specifically what youth may or may not be doing to place themselves at risk as a result of being on-line. Thus, it is imperative to study on the impacts of Internet to youth in Tanzania.

1. The study will help the researcher to have practical skills on conducting research.

2. The study will open room for other researches to be conducted on the field so as to identify what should be done to prepare youth to overcome the challenges of Internet.

3. The study will also help the government and stakeholders in policy making to review country policies concerning the usage of Internet.

4. The study will also reveal the danger associate to internet usage among youth in Tanzania.

5. The study will also reveal the danger associate to internet usage among youth in Tanzania as far as our culture is concerned. 1.4 OBJECTIVES OF THE STUDY

1.6 LIMITATION OF THE STUDY

The study will investigate on the following questions: 1.Are youth in Tanzania aware of the Internet and to what extent? 2.What service offered by Internet (web) do youth prefers? 3.How Internet influences youth behavior? 4.How does youth benefit from the Internet?

Impacts of Internet to Youth. (2016, Oct 18). Retrieved from https://studymoose.com/impacts-of-internet-to-youth-essay 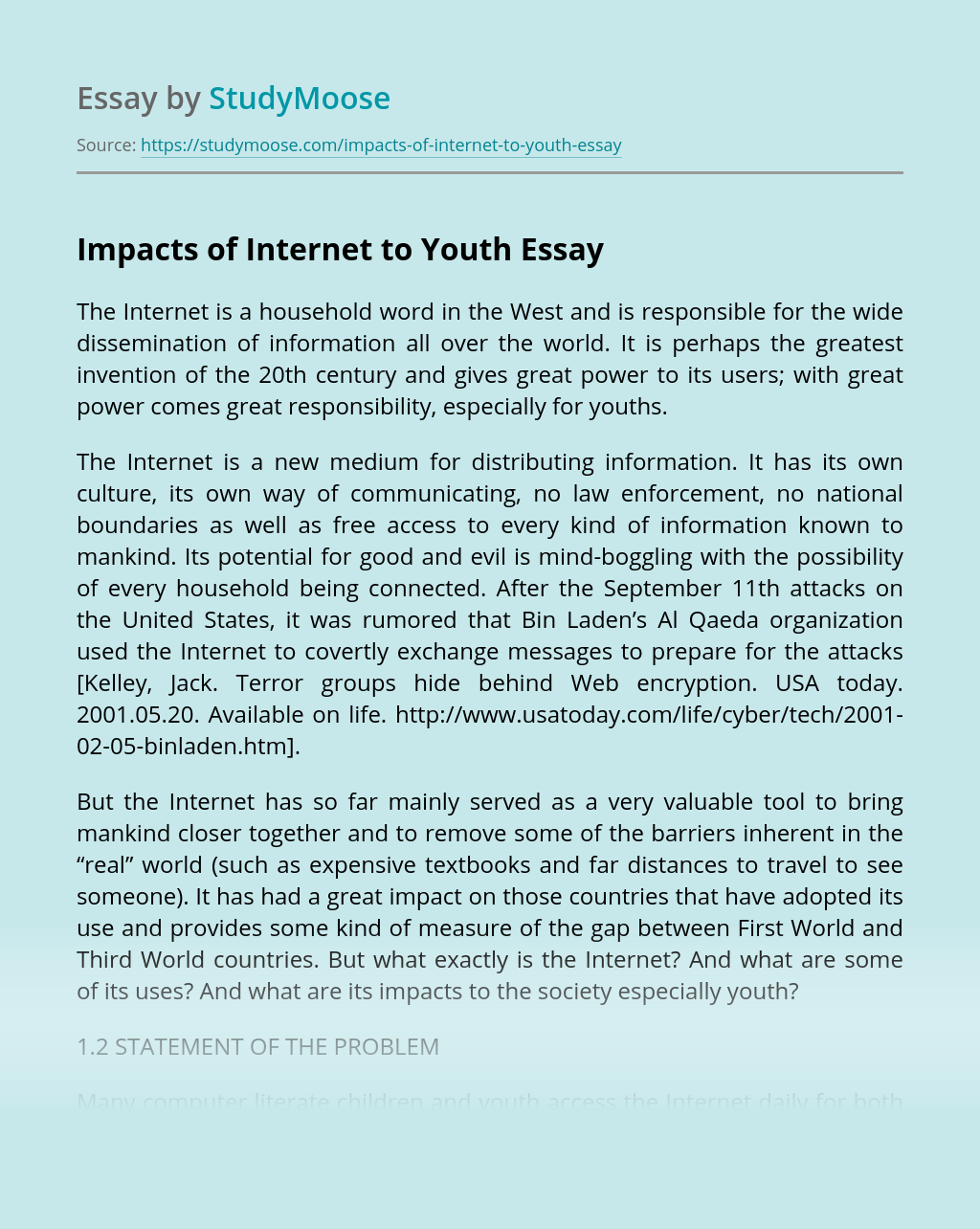 Internet is essential in people’s life, and internet surfing is very popular nowadays. Nevertheless, office workers may be fire due to surfing on the internet in workplace. It is not a valid reason to fire an employee since Internet surfing has three positive influences on office workers. First of all, web surfing allows employees to...

Internet Use: The Advantages and Disadvantages

Claim 1 Internet are useful and allow people across the globe communication with each other. Reason: The internet changing the communication tools. Evidence: According to Dr. Crispin B. (2010), majority of the users do their work daily with internet and they take a chance to get involved in the discussion during work time rather than...

The Effects of the Internet on Our Communication

Nen Benefits of CMC and the Internet to Communication Communication has been one of the highest goals to members of any society. Without communication, there is no way that anyone would know about the day’s current events, know about new information, and know about what is going on around the world. In the fast pace...

Influence of Internet on Students

The influence of internet is uniformly shared by all the age group of the society in spite of being young or old. But the school and college students under the age of 20 are more involved in INTERNET. They have become active users of social networking sites like Orkut, Facebook, and Twitter. Even though these...