Business is an economic activity and decision making by the management is an economic process. It will be influenced by economic and non economic environment of business. You will appreciate that the business environment is quit complex, with heterogeneous elements in the environment. A manager must understand and analyse this process of interaction. In particular, you must note that all non-economic, environmental variables have economic implications, and that is why these variables singly or jointly, affect business activity.

Business must have a social purpose; business concern must discharge social responsibility and social obligations and have social commitment.

Don't use plagiarized sources.
Get Your Custom Essay on IMPACT SOCIO CULTURAL FACTORS ON BUSINESS Just from $13,9/Page

Otherwise business cannot enjoy social sanction. We may identify the critical elements of the sociological environment of business. These elements are: Social institutions and systems

Until the recent past the caste system ensured a very simple occupational division of labour in our society. The place of the individual was very clearly defined in the social hierarchy of the joint family system where division making was centralized in the head of the family who commanded respect for his age and experience. Social Values and Attitudes

In India Today, most of
these age-old social institutions are dying fast. It is because the social values and attitudes are changing very fast. The western values of individualism have caught our imagination. Indian women no longer remain satisfied as housewives. Business does not remain confined any more within a given community or caste. Customs, traditions and conventions are no longer rigid. They become flexible. Society’s view of its authorities, responsibilities and delegation, its attitude towards business as a profession, towards achievement and work, towards ownership and management-all have very definite implications for the sociological environment of business. Education and Culture

Then come Education and culture as an ingredient of the sociological environment. In this category you may list the attitude towards education; the need for business education; education matching the skill requirement of industry and manpower utilization the role of business schools and executive development programmes ; education versus training ; correlation between formal literacy and the level of culture; the spread of education and its impact on business ethics ; material progress and business morality ; business culture and organizational culture. Role and Responsibility of the Government

At a given point of time, society has a level of achievements and aspirations. Such achievements and aspirations have to be defined clearly and categorically, and any divergence between the two has to be bridged through relentless social effort taking care of social welfare and social constraints. This is where the role of the Government as a welfare state comes in. The government is the apex social institution. It is the Government which has to make sure that social progress is not handicapped by the tyranny of the majority, otherwise social tension. Social Groups and Movements

Social tension originates in groups composed of frustrated individuals from groups on the basis caste, creed, religion, language, trade and profession and similar other factors. Social groups and the social movements that they engineer are a critical variable of the non-economic environment. Some of these groups have direct business interests. Thus, consumerism, trade unionism, the cooperative movement, professional management, and shareholder’s associations all pose challenges for business operations. Socio-economic order

In a country like India, we have a plural society. Ours is a land of a variety of food, dress, languages, religions, and culture. We also have dual economy with the traditional sector co-existing with the modern sector. Technological dualism in India is very pronounced. Bullock Carts ply on the roads and the Airbus flies through the sky. All these make a very unique socio-economic order for India today. From time to time, this social order gets disturbed and modified, hopefully for the better, through social movements and social policy formulation on subjects like science and technology, ecology and forestry, family planning, animal husbandry etc. Social problems and prospects

Social Problems and prospects are just offshoots of a changing socio-economic order. You might be aware that consequent to industrialism and socio-economic development in many developing countries, the death rate has fallen faster than the Birth rate, and this has resulted in an explosive growth of population. This in turn has brought about growing unemployment and poverty, poor housing and sanitation, urban congestion, pollution and increasing incidence of anti-social activities. Therefore, economists suggest that you should always attempt a social cost-benefit analysis of industrial development. As society moves from the pre-industrial stages of development, social benefits must outweigh social costs, otherwise the emerging new social order will prove unstable SOCIAL MOVEMENTS

The nation has witnessed several social movements. With the passage of time, as industrialisation proceeded either in the form of a revolution or evolution, sooner or later organised movements were engineering by various social groups to protect their own interests. The class-conflict grew in intensity, and consequent upon that grew a variety of social movements. THE TRADE UNION MOVEMENT

Trade unionism is the child of industrialisation. With the growth of the industrial culture, workers have felt that their socio-economic interests cannot be protected if they do not come together in some sort of organized union. THE CONSUMER MOVEMENT

Like the labour movement, the consumer movement also exercises a considerable influence on the socio-economic environment of business. A strong consumer movement is the sine qua non of a healthy household sector in an economy. THE MANAGEMENT MOVEMENT

Compared to trade unionism and consumerism, the management movement in India has been relatively strong and distinct. Since Independence, one finds certain distinct trends in our corporate management Philosophy and structure. Independent India inherited a structure of corporate management which was dominated organisationally by the Managing Agency System, and entrepreneurially by particular business communities and, among them again by a group of families of big business houses. THE

In our socio-culture environment of business, the shareholders’ movement is a recent offshoot of the professional management movement. The shareholders ‘are increasingly becomingly becoming aware of their legitimate rights. ENVIRONMENTAL MOVEMENT

Issues related to protection of the environment and ecology have received worldwide attention not only in developed countries but also in the developing countries. Increasing concern has been expressed about environmental degradation which can risk human life and existence. 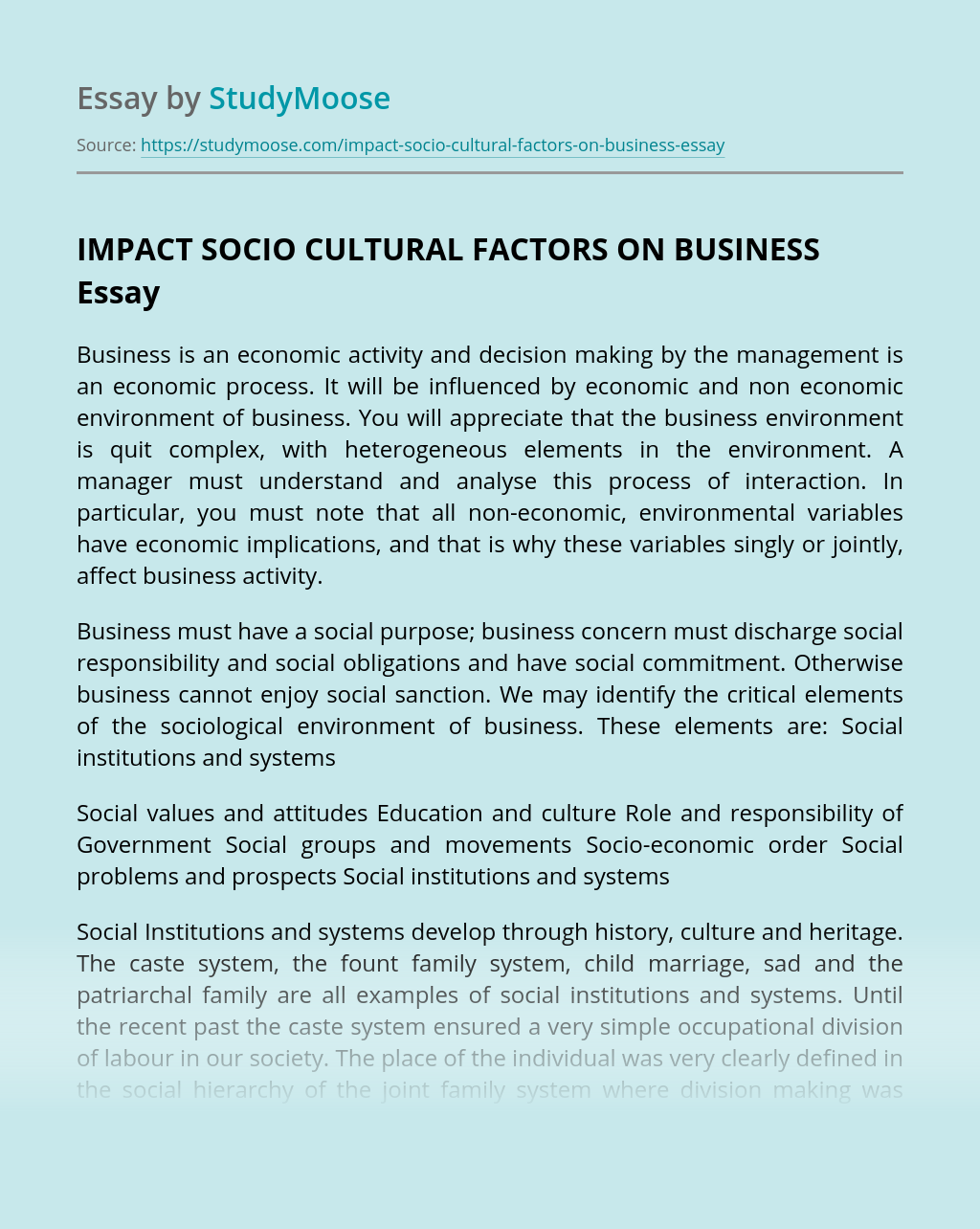