Impact of the Vietnam War on Australia

The controversial Vietnam War had a huge impact on Australian society in the 1960’s/1970’s. It affected all aspects of society, such as the social, economic and political issues. Vietnam was known as a ‘TV War’. A lot of violent and gruesome footage of the war was broadcasted right into people’s homes. People felt the need to report their own opinions and a very biased view of the war, they were not concerned with the thoughts of the Vietnamese people and their say in what was going on.

Don't use plagiarized sources. Get your custom essay on
“ Impact of the Vietnam War on Australia ”
Get custom paper
NEW! smart matching with writer

The Australian government was criticized for being selective in what it showed to the public. They altered it to suit their own opinions. One lie that it pushed was the thought that the war was helping the Vietnamese people, and also that the government was determined to disprove that it was blindly supporting and following the USA into an unnecessary war. Because of all these many viewpoints and all the news coverage, society itself seemed to be split in who to believe and what was right.

Many protests were the result of this.

Conscription had forced young men to fight away from their home country. Many people saw this as unfair and wrong. This too caused a lot of controversy and many arguments were made against the government for introducing this.

This public opinion also sparked the interest of the political parties. The Labor and Liberal parties had both opposite opinions of the war, and used Vietnam as more like a tool of election propaganda.

The Labor party spoke out against the immorality of Vietnam and people were supporting then claiming that it was unjust and cruel. The party organized the first Moratorium, where more than 120,000 people took part and expressed their opinions. The protesters had hoped that Labor would win the 1966 elections and would then withdraw the soldiers. When the Labor party was defeated, the protest movement had died down for a while.

After the war, thousands of Vietnamese boat people have come to Australia. This was because the people had dissatisfaction with the Communist government and that Australia was within reach by boat.

How and why Support for the War changed over time.

— At the beginning of the war, surveys found that the Australian public at first supported the idea of a small military team based in Vietnam training Vietnamese soldiers. In 1965 when 800 combat soldiers were sent to Vietnam, again the public still generally supported it.

Though in 1967 there was a change, most Australians still supported the idea of helping the South Vietnamese government but they were against sending any more Australian soldiers. But still, more were sent.

Between 1967 and 1969 there was a definite change and eventually most Australians were in favour of a complete withdrawal of soldiers from Vietnam. This opinion continued throughout the war and many protests were the result of it.

There was a great Vietnam Debate on the issue and many valid points.

They believed in the Domino Theory and saw it as a genuine threat.

They acknowledged USA’s role as a protector to the world against Communist and that they had to be supported.

South Vietnamese people had to be supported.

That the war was really a civil war and was none of our business.

Vietnamese problems were only natural considering that the country had been recently divided.

If the Communists of North Vietnam had gained control, we could just contain the whole of Vietnam, therefore stopping the Domino Theory.

Western interference was bound to fail, the French did.

The Catholic Church constantly supported the war. During the WW1 the church had strongly opposed it, but dealing with Vietnam they were strongly in favour of Australian involvement and conscription in order to fight a ‘godless communism’.

There were two main protest groups… those who believed that Australia should not be involved, and those who believed that only conscription was wrong. Most of the protests at the time were quiet and calm. A number of universities organized ‘teach ins’ where people present and argued for both for and against the involvement in war.

There were more violent and active protests after witnessing the ones in the USA. A ‘don’t register for conscription’ campaign had been launched aimed at the young men. In late 1966 and anti-Vietnam group stopped Sydney’s rush hour traffic by sitting on the main roads. This protest movement though was nothing compared to the ones in America, and the ones here had almost no effect on the government’s choice.

The war caused many social outbursts and many draft resisters, objectors and protestors had been fined and jailed, and the soldiers met a hostile and unwelcome on their return home.

The Menzies government introduced conscription in November 1964. When it was first announced it only involved military training that required no overseas service, which wasn’t the truth. The government got strong hints that service would be needed in Vietnam, so really conscription was a way of preparing for overseas combat. Who went was decided by a ‘lottery. This was done by every date in the year written down and days were drawn at random. If a mans birthday was drawn, he then was conscripted.

Overall the protests against conscription lasted longer than the protests against the war itself. Though when at first the government announced it, the public’s reaction was quite little. But there were later developed protests about individual students being called up to war. There were public draft-card burnings, student sit ins and large noisy group demonstrations when the American President, Johnson visited Australia.

By the late 1960’s a much stronger and more violent form of protest appeared. Protesters raided officers and campaigns were launched to persuade young men not to register for conscription. The Labor Party was against the conscription method, calling it unfair, and they had much support from the Australian public.

Impact of the Vietnam War on Australia. (2016, Jul 22). Retrieved from https://studymoose.com/impact-of-the-vietnam-war-on-australia-essay 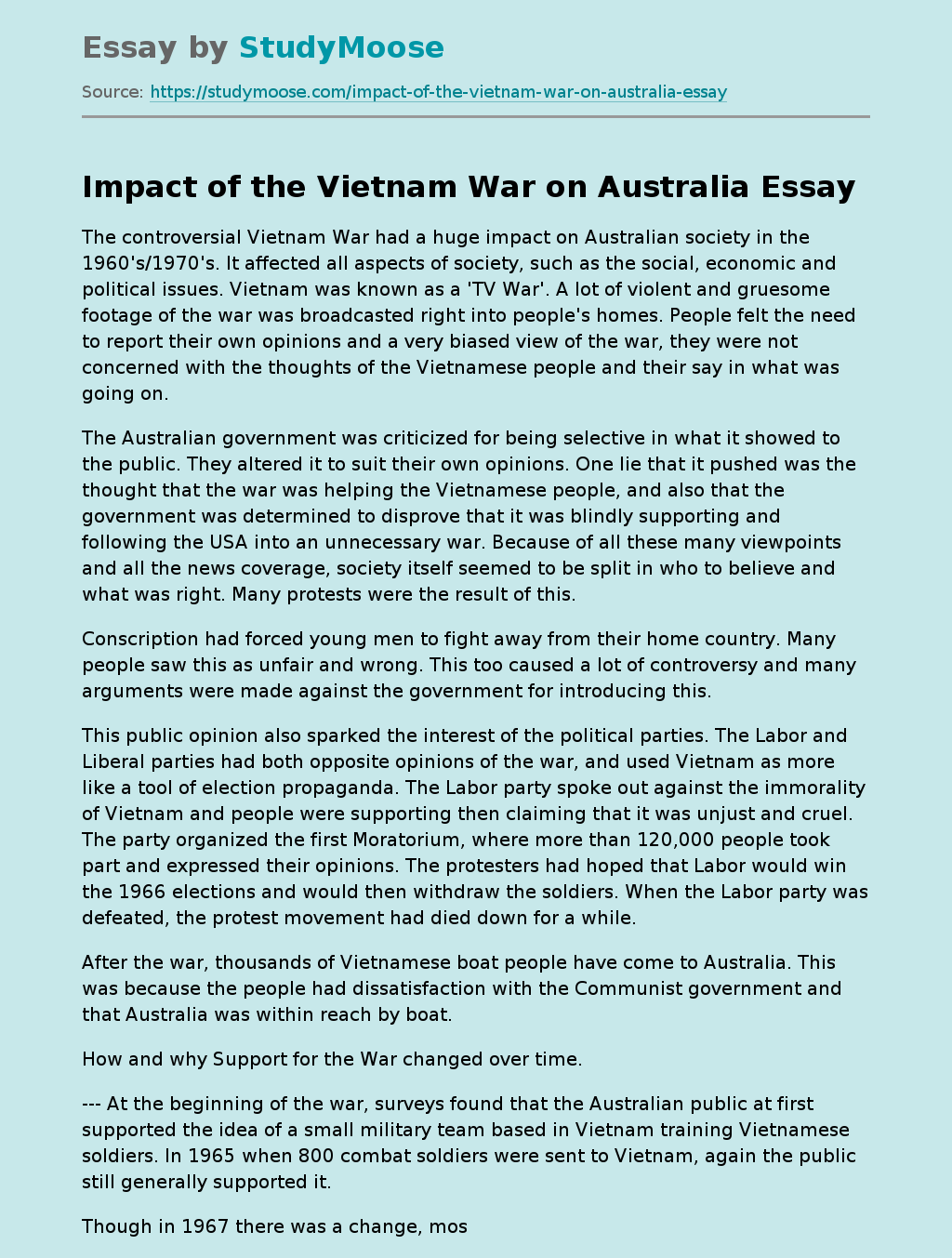