Don't use plagiarized sources.
Get Your Custom Essay on Impact of Television Violence on Children Just from $13,9/Page

In order for parents to protect their children from the harmful effects of violence on television, it is essential to know what the impact of television violence can be on children. Violence can play an important role in the development of children; it may cause some to perceive it and not get affected and some may be affected by it in a very dangerous way like the columbine incident.

There has been studies done over the past and hundreds of studies have examined how violent programming on TV affects children and young people.

A study from a psychological research showed three major effects of watching television “Psychological research has shown three major effects of seeing violence on television: Children may become less sensitive to the pain and suffering of others, Children may be more fearful of the world around them, Children may be more likely to behave in aggressive or harmful ways toward others” (http://www.apa.org/pubinfo/violence.html). Children can be vulnerable to violent images and messages. Children in particular can become victims of violence on T.V. than adults; which can cause them to be afraid of the world and people they are surrounded. The most common T.V. shows that affects children of all ages, which is close to real life violence is cartoons. In most of the cartoon shows violence is exposed as humorous and realistic conclusions of violence; which could cause children to show aggressive behavior towards their peers and others.

Usually these types of shows do not show the consequences of violence, which doesn’t teach children that acting or enacting violence they can face jail time and other penalties for juvenile offenders in the court of law. According to a study on preschoolers at Pennsylvania State University, “Children who watched the violent shows were more likely to strike out at playmates, argue, disobey authority and were less willing to wait for things than those children who watched nonviolent programs” (http://helping.apa.org/family/kidtvviol.html). Parents should pay close attention to what their children see on television like shows, news, movies and commercials. Studies have shown that kids are more afraid of violence in news coverage than in any other media content. As children get older and are better able to tell the difference between fantasy and reality then they would have a better understanding of real news events and the purpose of such graphic footage. Effects on a healthy child development, television can affect learning and school performance. If watching television cuts into the time children need for activities, which is crucial to healthy mental and physical development as well.

Children’s free time should be surrounded by time spent in activities such as playing sports, reading books, explore nature such as learning about plants and flowers instead of watching T.V.; which can lead to obesity which is a serious concern today. According to researchers, they concluded that viewers feel an instant sense of relaxation when viewers begin to watch TV and also said that feeling disappears as soon as the television set is turned off; which I personally feel is true. The feeling is not similar to the thrilled feeling a person gets from playing sports. For example, after watching TV, viewers may mentally feel tired and feel a sense of low energy.

Parents should investigate on different studies that are conducted to understand different messages that violence on television sends to its audiences. Violence is portrayed in many ways it can be acted out by characters such as a hero or by a villain. Different types of violent scenes can be shown clearly in depth or it maybe left to the viewers imagination; for example, imagination allows a viewer to come up with his/her own conclusion to how a certain murder may have occurred, which represents a type of television violence shown by a network.

In conclusion, Parents have to speak to their children about the different shows that are viewed by their children to avoid misinterpretation of violence and aggressive behavior that could lead them to become criminals. Parents should take an initiative on the issue, “While most scientists are convinced that children can learn aggressive behavior from television, they also point out that parents have tremendous power to moderate that influence” (http://www.apa.org/pubinfo/violence.html). Parents should discuss violence in the news such as war and acts of terrorism need to be put into a more detailed and descriptive context for children. They should also explain different acts of violence and criminal activities to de-sensationalize, so the children don’t become fearful of the world. By talking to kids about violence in the media they can critically understand television, movies, music, and video games that can help them put media violence into perspective by not taking the full impact of violence mentally. They can start to judge the media violence and start to examine its use in the media that they tend to watch.

The children also need to be addressed on how the actors of a show feel in real life about the part they played in a particular show. By expressing these issues out in the open the children can get a better perspective on why violence on television is potrayed and why people are attracted to it. They would understand that producers and directors create violence on television because it gives a certain network ratings; they would also understand that larger amount of audiences want their programming to be more entertaining with action and the network also creates such and atmosphere of violence through advertising to a younger audiences. Self Identity of children should not form from watching television because that can cause them to be like someone from TV rather than themselves; opinions of others form our social identity, in this case children perceive the television as social identity and become a TV character in real life as if the TV is set’s the standard of who you are.

Becoming a character from watching television is subjectivity. Consciousness and the unconsciousness as well as emotions are part of our sense of who we are in this case children can come up with their own conclusion on who they are for example, a violent character such as a hero, a criminal, or a Psychopath that they might become from watching violence on television. Children need to understand, what violence is. After better understanding of violence they can then start to put media violence into perspective.

Impact of Television Violence on Children. (2016, Jul 05). Retrieved from https://studymoose.com/impact-of-television-violence-on-children-essay 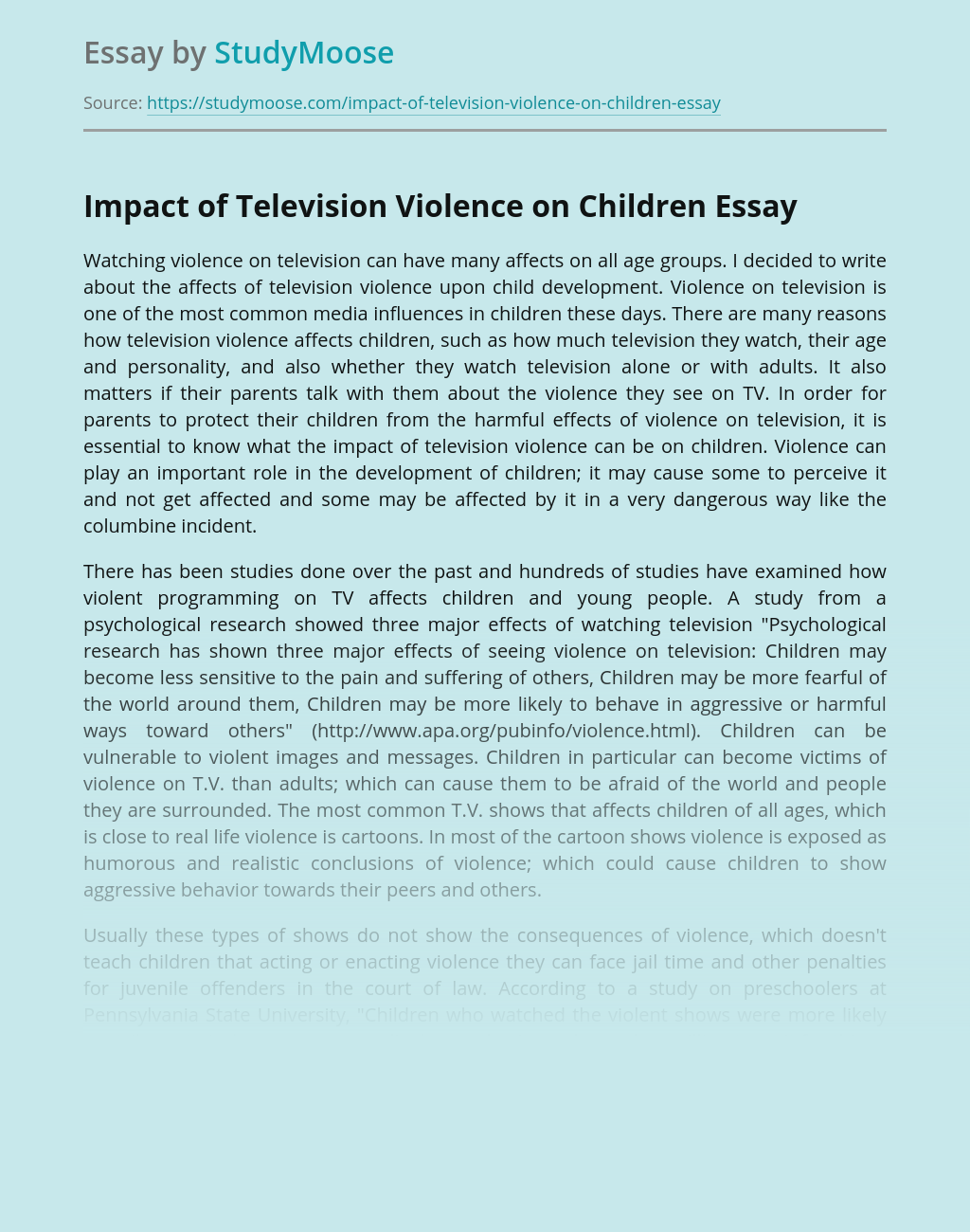 Violence in video games lead to violent outbreaks and bad behaviour in real life, many people believe so. Are these violent video games moulding and fuelling today’s generation of young minds to a more violent side, forgetting the idea that these games are solely for entertainment purposes. Many studies have taken place surrounding this idea,... VIEW ESSAY

I. Introduction A. Thesis Statement You are what you watch. Easy to say, and not too difficult to imagine either. A little over a decade ago, two boys who later became household names in America, Eric Harris and Dylan Klebold walked into Columbine High School in Colorado and went on a mass murdering spree where... VIEW ESSAY

View sample
Get Essay
The influence of violent media on aggression

Introduction This literature report will help assist in the understanding of how violence within the media contributes to an increase in aggression. In the present, there has been a vast increase in mass media saturation in contrast from the past. This present era of twentieth century society enables television, radio, videos, movies, computer networks and... VIEW ESSAY

Introduction The article I will be critically summarizing is “Conflict as Property”. It is an influential article written by the criminologist Nils Christie in the late 1970s. Throughout the entire article Christie argues “criminology to some extent has amplified a process where conflicts have been taken away from the parties directly involved and thereby have... VIEW ESSAY

Juniad is ten, he is currently experiencing constant developmental phase through his life experience, the nature of his current developed behavior problems are: aggressiveness, defiantness, disobedient and incompetence in class activities. His challenges are reading disorder, school insufficient resources, failure, bullying and dysfunctional parenting. Using the Erik Erikson psychological theory of developmental phase I will... VIEW ESSAY