Impact Of Technology On Architecture

What impact has technology had on architecture of the 20th century?

Throughout the nineteenth century, architecture refused to have anything to do with industry; it had been concerned solely with monumental projects glorifying the state and giant civic structures expressing the pride of its people. This however, all changed with the dawn of the twentieth century. Industrial production became an integral part of modern society and a new relationship was forged between man and machine. From the nineteen hundreds on, architecture was viewed in this new light.

Modernism and the optimistic belief that architecture could change the future of society through a synthesis of science and technology was the result.

It reflected a new ideal for humanity – one that linked man to a new rational culture in tune with mechanization and efficiency. Technology directly affected architecture by facilitating the creation of new materials with which to build. These new materials freed the architect from engineering limitations of the past and allowed for new rational designs based on a buildingOs function.

But most importantly, these designs were given form by a new optimistic ideal – that rational design would make for a rational society. Technology transformed architecture into a tool for social and cultural reform.

The industrial revolution gave three new materials to the architect of the 20th century: reinforced concrete, steel and glass. The new materials were inexpensive, mass produced and flexible to use. These affected American cities profoundly by allowing greater density through higher buildings. Imagine the typical office floor plate as we know it: open space with a few columns.

You couldn’t go as high or have such long spans between columns with timber frame. Chicago is a great example of the kind of boom that occured with this kind of new building technology. One need only to look to the Carson Pirie Scott Building built by Loius H. Sullivan in 1906 to understand the effect that new materials had on architecture of that era (fig.#1). With its wide spans, large horizontal windows and non load-bearing walls, the building has a much lighter and more open feeling than that of its predecessors. The Carson Pirie Scott buildingOs elevation is expressive of the Chicago Steel frame style made possible by industry.

Another example of how new materials affected architecture is the Apartments at 25 bis Rue Franklin in Paris designed by August Perret (fig. #2). He used reinforced concrete for the skeleton of this building , which is visible on its exterior, and which gives it an overall impression of lightness. This also allowed Perret to open up his floor plan in ways that were previously restructed in wood frame construction; the size of the windows was only limited by Paris bye-laws. Structure became expedient, quick to build and flexible to use. Along with Elisha OtisOs electric elevator, these materials – as a direct result of technology – gave birth to the sky scraper and changed the face of architecture forever.

Major new buildings projects churches. But more fundamental was the recognition that a new free architecture was neccessary because of the emergence of new building types for which there was no provinance in the history of styles. There were a vast programme of building types – schools, collages, libraries and above all offices.

> -reduction of form to function(same as elimination of ornament, but

> including function also as how space is used)

> -new kind of ethic in architecture-truth, honesty- to the point often of

> century, turning to ordered rationality of production) Lots of white

> -ideal of universality in architecture: modern materials coming from

> industry prodused a standardization that was envisage to be applicable in

> any climate and culture. Corporations naturally picked up on a universal

> anecdote I heard from a visiting architect

> who once had a beer with Mies van der Rohe. Asked Mies “What materials

> would you use to build in Africa ?”…”Glass and Steel”…. “What materials

> of the car in the American landscape. His utopia of the 1930’s is

> frighteningly close to what has actually happended to suburban”citie”

> -post-modern architecture emphasis of the legible image of the

> behind the wheel of a car. See Robert Veturi’s ‘Learning From Las Vegas’

> Portland Building for a dumb box with decoration aimed at communicating

> mere image to the post modern eye dulled by the assault of T.V. and used

Social engineers Yet, underlying all the vitality in all the continents was a theme that reflects the need to find something fundamental in architecture, something so real that from it a new style could be rationally developed. Buildings designed with a view to asthetic appeal.

Impact Of Technology On Architecture. (2016, Jun 18). Retrieved from http://studymoose.com/impact-of-technology-on-architecture-essay 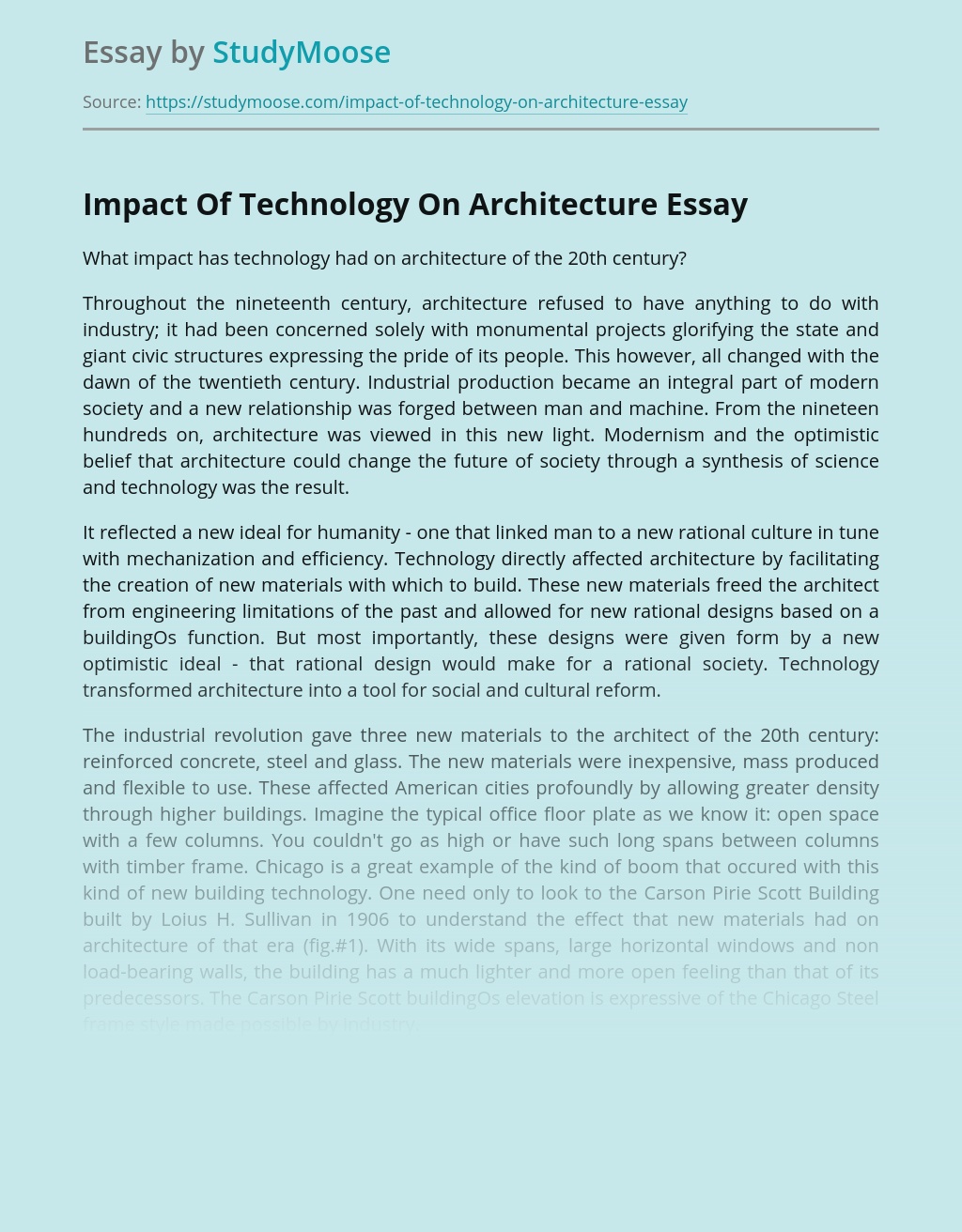 Don’t waste time
Get a verified expert to help you with Impact Of Technology On Architecture
Hire verified expert
$35.80 for a 2-page paper
Stay Safe, Stay Original