Impact of Social Media on Image of Woman

Since the beginning of social media, the perception of the perfect woman has taken some drastic changes. From styles of clothing to the slightest detail such as eyebrows, the slight definition of bone structure, and the way a girl may angle her eyeliner, these minor things can make the difference between the thought of beautiful or atrocious. This generation has very little choice but to look at standards of beauty through a screen. The question is, how much has social media really affected the common perception of body image?

Social media has changed the way that people in the United States look at beauty.

Don't use plagiarized sources. Get your custom essay on
“ Impact of Social Media on Image of Woman ”
Get custom paper
NEW! smart matching with writer

In the conflict theory, social media is creating standards much too high for our society to follow. This issue also corresponds with the feminist perspective because it deals with the perspective of female beauty. Women feel cheated by the system of social media and advertisements. The media is able to manipulate a photo of a woman’s body and take away all of her flaws.

Although this benefits the industries, it falsifies the true image of beauty. This shows the power of the beauty industry over consumers. By manipulating pictures of their models, they are able to escalate the standards for women. These new photoshopping methods have made many women hate the way they look. In a recent survey conducted by Find Your True Beauty, four-fifths of women say that seeing images in magazines, TV shows, social media, and advertisements gives them lower self-esteem along with self-dislike (2017).

Connecting women to media create a way for them to express their best self. This allows women to show off their favorite and most confident pieces of themselves. In the past several years, the online dating fab has become very popular for finding a soulmate. A study was done by Nicole Ellison, Rebecca Heino, and Jennifer Gibbs about online dating tendencies revealed that many women often fill their profiles with pictures of themselves at their most flattering moments. Usually using a filter to enhance the look of their faces, or photoshopping to create a more slim and curvy body for themselves. Although it may attract more men, this actually causes these women to feel worse about themselves in the future. Because their pictures are taken at their highest moments of self-esteem, these ladies often look back at the photos and compare their body in the present to what they had in the past, allowing these women to grow more concerns for their physical appearance. This is all traced back to the moment these ladies decided to conform to the social media standards (Ellison, Heino, and Gibbs 2006:417)

According to a study conducted in the Phi Sigma Sigma sorority at Bridgewater State University, there is a connection between negative body image and social media, but it is not always direct. The negative body image results from the internalization of messages and images portrayed by social media and overexposure to images of extremely thin women (Bell 2013: 8). Mass media has been able to develop and reinforce the ideal body image down to the most intricate details, such as eyebrow shape and “hip dips”. Many highly influential people on social media highlight their eating and exercise habits, leading women to believe that following these diets and programs will help achieve the “ideal body”, which can be extremely unhealthy as it leads women to go to extremes to achieve these unrealistic standards. Most of the people portrayed as examples of this body type are models.“The average American woman is 5’4” tall and weighs around 140 pounds, while the average American model is 5’11” tall and weighs 117 pounds. Most fashion models are thinner than 98% of American women (2017).”

In a Feminist Forum Review Article, Richard Perloff commented on how social media changes so quickly that it is difficult for researchers to determine how exposure to images of thin women over a prolonged period of time can affect the average woman’s self-esteem and body perception. Most studies have been conducted in western countries, but the most concerning effects of the mass media on women’s body image are the long-term eating habits women obtain which are often eating disorders in disguise (Perloff 2014:1).

The media has also helped marketing companies make money off of women’s body perception. In an article written about the influence of media on the views of gender, Julia Wood shows that before 1915, body hair was not something the average woman worried about, but beginning in 1915, marketing campaigns began to show women that underarm hair, followed by leg hair in later years, was something that was not normal and unattractive. Within a few years, images of models with bare armpits were in most women’s magazines, and companies selling shaving products made big money from women who believed their body hair was unnatural and unappealing to men (Wood 1994:37).

As stated previously, companies and beauty brands use social and mass media as a way to connect with their product users and persuade women that they need the companies products in order to be beautiful. In an analysis of Facebook’s influence on marketing, Bin Shen and Kimberly Bissell discuss how Estée Lauder, MAC Cosmetics, Clinique, L’Oreal, Maybelline, and CoverGirl specifically benefit from social media sites such as Facebook in order to push their products more effectively than ever before. Fitness brands such as GNC use these same sites to advertise vitamins and dietary supplements, which adds to the problem of unhealthy eating habits influenced by mass media (Shen and Bissell 2013:1).

A good way of looking at the relationship between body image and social media is provided by Jennifer S. Mills, Amy Shannon, and Jacqueline Hogue,

Much like the relationship between the traditional media and body image ideals, the link between social media use and body image is not straightforward; it appears to be affected by various psychological factors, such as individual differences in the tendency to compare one’s appearance to that of others. When people compare themselves to others who they consider to be superior to themselves it is known as upward social comparison (Mills, Shannon, and Hogue 2017:151).

Internalization is a considerably used term when discussing how mass media affects women’s body image. Internalization refers to how a person processes the information they perceive and incorporates it into their ways of thinking. In terms of mass media and body perception, internalization of information directly relates to the individual’s perceived self-worth. When social media leads a woman to believe she is not beautiful by cultural standards, the way she internalizes the images she is shown will affect her confidence and self-worth. Negatively internalized information often leads to low self-esteem and eating disorders (Bell 2013:7).

The most prevalent aspects of beauty throughout history are size and shape. No matter which century is being looked at, these two components are always the top of the list. The associate curator of costumes at the Fashion Institute of Technology, Emma McClendon, exclaims, “Whether it’s contemporary or 19th century, they want to know what size it is or what size it would correlate to, or what measurement it is,’ she said. ‘We as a culture, as a society, are obsessed with size. It’s become connected to our identity as people,’ when talking about visitors at the museum (Howard 2018:1). This shows that most people have the idea engraved into their minds that beauty is all based on shapes.

Although shape may be a large factor of beauty, many sizes have taken the name of beauty throughout history. In the earliest years, artwork was created to capture the beauty of women with a more voluptuous and curvy structure (Howard 2018:1). More recently, the late 1900’s through today, the image of beauty has taken on a much thinner frame but curvier backside (Howard 2018:1). The reason for this: mass media and our society’s ability to turn a skinny girl into a star. An example of this new and favored shape would be of the Kardashian/Jenner daughters. These girls are sought after by several brands and top modeling agencies. With their extraordinarily small waists and their large curves, these sisters create a societal beauty standard that is much higher than many people seem to achieve. Many women feel like they are not beautiful in comparison to what they see on social media. Because it is so easy for people to broadcast these images to millions of people in mere minutes, culture is fed a unanimous idea of what beauty is. With new developments in technology, editing images and photoshop make it easy for girls to post pictures to their social media that make them seem smaller or larger than they really are. Due to this, women can look through their phone and feel like they are in the minority of people who do not fit this cultural standard.

Impact of Social Media on Image of Woman. (2021, Sep 15). Retrieved from https://studymoose.com/impact-of-social-media-on-image-of-woman-essay 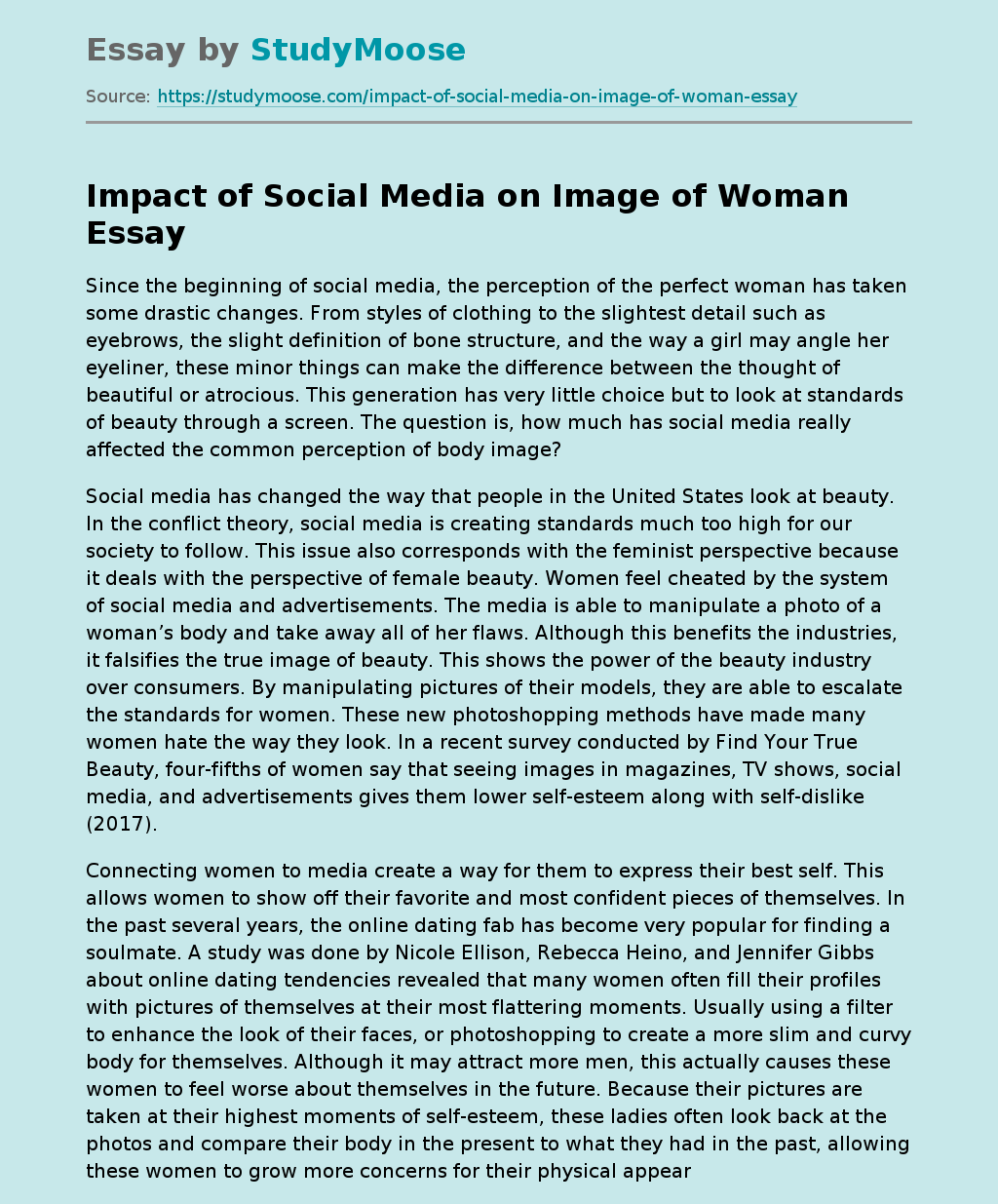