Don't use plagiarized sources. Get your custom essay on
“ Impact of Social Media on Generation Y ”
Get custom paper
NEW! smart matching with writer

They seem to struggle when it is time to talk to people of higher authority, (e.g. parents, teachers, other adults) because they lack the skills needed to do so. Through texting, and social media, Generation Y’s social skills have been altered due to these methods of communication.

In all the different ways that Generation Y communicates with its peers, texting is by far the most common form of communication.

In some research done by NPR.org, they have found, “For America’s teens, cell phones have become a vital social tool and texting the preferred mode of communication, according to a new poll by the Pew Research Center’s Internet and American Life Project”(Ludden). They have found that 75% of all teens between the ages of 12 and 17 now own a cell phone of some sort. Thus this explains how texting is becoming a main source of communication for teens these days. One of PEW Center’s study authors states, “There’s now an expectation that teens will contact each other via text, and they expect a kind of constant, frequent response” (Ludden).

An obvious negative effect of this form of communication is that it is declining the writing skills of teens across the globe. Frequently, teens will use slang in their messages in order to get them out faster due to the fact that they’re easier to write. Teachers across the country are finding that many teens don’t know how to spell different forms of the same word or how to use grammar properly in a sentence. Even though texting has created these negative effects, it has become a way to communicate that is easier than picking up a phone, due to the fact that it is less time consuming, and is quieter while communicating with one another.

Social media is a common second mode of communication amongst high school students. With advancements in today’s technology, teens can access social media just about anywhere that they go. In a recent study done by Shea Bennett, they found that 96% of teens who have access to the internet will use it to check their social media sites. This site also performed another study that stated that, “69% of American high schools have banned cell phones” (Bennett). With the amount of high schools banning cell phones, which would eliminate the texting mode of communication, students must look at another way to communicate with their peers. Social media is the obvious answer. Through Facebook, Twitter, Instagram, and YouTube, they can message each other and communicate that way. Social media has been found to create a lack of physical interaction amongst teens these days. According to Alice Martin, “Now, more and more people are interacting with others through different platforms like apps, role-playing online games, and social networks. This advancement has hampered the physical interaction skills of many children. Due to that, they don’t know how to interact with others when they meet them in-person or what gesture they should carry” (Martin). The social media sites of today are declining the skills needed for a student to get a job in the future. This means that the students heading into the work force do not know how to communicate properly with their boss for instance, or with a costumer that they need to speak to. This may result in a decline in sales and possibly somebody getting fired. That is even, if that student even gets hired for that job. Social media has also created a place for teens to interact and to meet new individuals that they may meet online.

Overall texting and social media have done a ton to Generation Y’s social skills as a whole. With involvements in technology every day, it is only obvious that texting and social media will continue to grow as a whole. Even though they are found to elevate exasperation, deteriorate patience, decline writing skills, and create a lack in physical interactivity, these modes of communication will continue to grow with the growing technological age this world is in. These things will soon enough almost become the social trend, and nothing wrong will be found about them. Generation Y is bringing along with them, an extreme amount of technological smarts that will help them, and hurt them in the future.

Bennett, Shea. “How Is Social Media Used In Schools? Statistics, Facts & Figures [INFOGRAPHIC].” – AllTwitter. Mediabistro, 22 July 2013. Web. 22 Jan. 2014.
The author of this article, Shea Bennett, is a Co-Editor at All Twitter. She was previously the founding editor of Twittercism. She is the writer of many other online lessons and articles. In this article, she states a bunch of stats that are referring to social media being used in schools. There may be a tad bit of bias, but nothing that a reader can’t recognize. The purpose of this article, is to inform people about the increase of social media usage in schools across the US. Dodgen-Magee, Doreen. “How Is Technology Shaping Generation Y?” Biola Magazine Article. Biola Magazine, 2010. Web. 13 Jan. 2014.

The author of this article is a phsychologist who has her Ph.D. She answers questions asked by the magazine company to the best of her knowledge and from conducting her own studies. There may be a tad bit of bias in here, but it is nothing that somebody can’t notice. The purpose of this magazine article is to inform the readers, of the problems that technology is causing Generation Y. She intends this article to be to an audience of highschool and college students, who possibly are doing research on this topic. Ludden, Jennifer. “Teen Texting Soars; Will Social Skills Suffer?” NPR. NPR, 20 Apr. 2010. Web. 22 Jan. 2014.

Jennifer Ludden is a correspondent on NPR’s National Desk. She covers a range of stories on family life and social issues. Before joining NPR in 1995, Ludden reported in Canada, and at public radio stations in Boston and Maine. Ludden graduated from Syracuse University in 1988 with a bachelor’s degree in English and Television, Radio and Film Production. There seems to be no bias of any kind. This article talks about how texting keeps soaring, and how it is affecting socials skills of high school students. The audience of this article appears to be parents and students alike. It’s an informative article that really describes how texting is hurting teen’s social skills. Martin, Alice. “The 4 Negative Side Effects Of Technology.” Edudemic. Edudemic, 30 May 2013. Web. 14 Jan. 2014.

The author of this article, Alice Martin is working as a content manager at Assignment Valley. She has also worked for various academic institutions and has served the education industry for many years. She became a writer after completing her college education and then established her career in the field of education and research. In this article, Alice states four main points that technology is doing to Generation Y. She intends this article to be read by high school or college students that may be doing research on this topic. Simonpietri, Stacie. Social Media & Parent-Child Communication. Social Media: Current Trends Among Children and Their Parents and Implications Regarding Interpersonal Communication. Jeremy Rose, 5 May 2011. Web. 14 Jan. 2014. 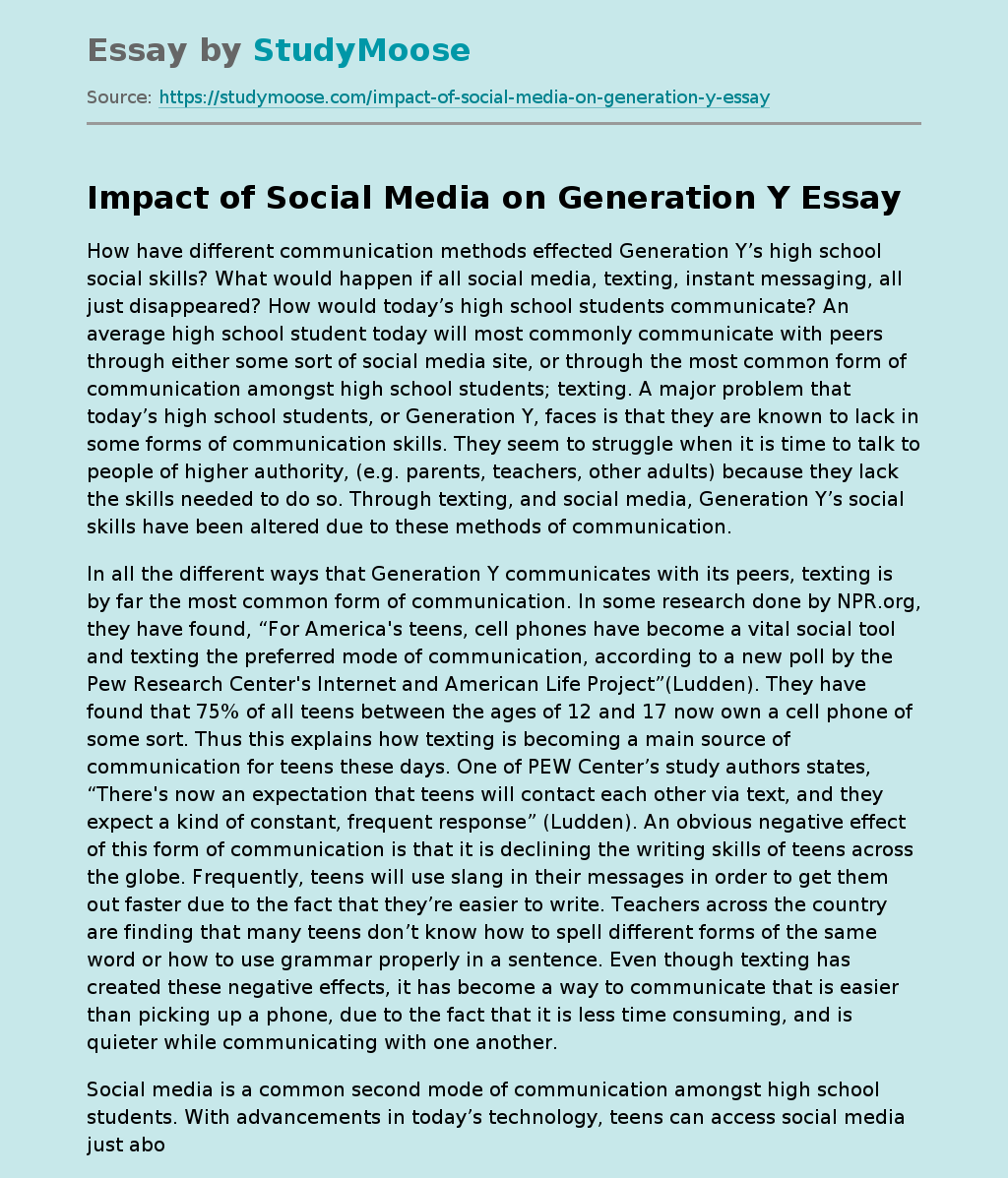