Impact of Social Advertising in India

Social Advertising is the first form of advertising that systematically leverages historically “offline” dynamics, such as peer-pressure, friend recommendations, and other forms of social influence. Social media has the power to transform a campaign into a religion. Social Advertising is the media message designed to educate or motivate the Indians to engage in voluntarily social activities. Social media has great potential to influence all corners of the web. It enhances the advertisement useful for the readers and also satisfies the advertisers effectively by reaching the public.

Don't use plagiarized sources.
Get Your Custom Essay on Impact of Social Advertising in India Just from $13,9/Page

This paper explores the impact of social Advertising in India by extracting the data from the public preferences on Social ads. From the collected data, it has been concluded that social ads in India has made incredible awareness and attracted the public towards it. This suggests that social advertising has a positive impact in India. Keywords: Media Message, Social Advertisement, Public preferences, Positive Impact.

It is also known as ‘Public Service Advertising’ or ‘Social Advertising’. It promotes the community’s health and well being by ensuring the ads that educate people and create awarness about drugs, diseases and other social prime issues in the country. It is otherwise called as ‘non-product’ advertising also. It means advertising various ideas which are not directly for the promotion or sell of the products or commercial services. Advertisements has become important in today’s current scenario as an indicators for social and economic progress. They enhance the direction of change in our values. In fact, a country without advertisements is inconceivable.

Advertising is a medium of mass education and therefore the role it plays should be taken seriously. Advertisers sponsor through cultural, social, sports or other activities or organized programmes related to health, hygiene or education including literacy by free distribution of booklets or other reading material. Free health check up camps also organized in villages by big industries or public sectors. Advertising is made by the advertisers in newspapers, on bill boards, and in the form of short advertisements on television.

It creates a awareness about the democratic right of a common man. Social Advertisements operates the corporate social responsibility. The big advertising agencies which are awarded for social services also create advertisement and produce by themselves. It also produce for the Government and their own organization with no profit and no loss basis. Thus, the advertisers in India started to contribute to the development and welfare of the society, but still it has to develop in a long way. Advertising ideas, such as, reduce traffic congestion, improve health, conserve natural resources, plan families, educate girls, increase marriage age etc. serve basic social and economic needs.

In India social advertising is in infancy stage. The social and economic welfare of a nation can be mainly attained when harmonious effort of Advertising is reached to the citizens by visualizing them the beneficiary and urge about the social ads. The image of ads are promoted in the public service advertising. Certain campaigns are arranged to promote the Social advertising in India. In India, the social ads are enhanced by popular celebrities. The people in rural areas get attracted more through the ads. They willingly engage these ads in their life and attain benefit out of it. For instance, Amitabh Bachchan come for polio immunisation ads.

By viewing this more families take interest in it. According to the AdEx report of 2007, it was found that many of the social ads are promoted by Amitabh Bachchan mainly concentrating on the “Health Awareness”. Advertising agencies have stated that organisations which are heavily contributing in social advertising, spend minimum of 5 crores in print Advertising. The non-metro city newspapers garnering 56 per cent of the overall social ads. Government organisations as well as NGOs have increased the expenses by 30 per cent over the last ten years owing to the growing economy.

This ads create a huge impact on the mass audiences of India. For example, the Tata Tea “Jaago re” campaign which was aimed at making people aware about exercising right to vote was well received by viewers. In the commercial industry, they talks about individuals needing to broaden with changing times. It shows two friends sitting in a restraunt and one of them tells the other friend to have a look at the gay couple on the other table. So his friend picks up a rolled newspaper and taps him on his head and continues to have his lunch. A punch line then props up saying “it is time to open our minds”. The above few ads creates awareness to both literate and illiterate citizens in India.

A review literature can be interpreted as review of an abstract accomplishment. Different authors have pointed out their view of social advertising. It will analyze with the present condition of social advertising. The literature will be in the form of thesis, researchers, academic studies. Srivastava, Vibhava ; Nandan, Tanuj (Jan-Mar 2010) states that advertising plays a significant role in the society. It is stated that it is unethical if the norms and values changes due to the advertising. Ciochetto, L (Nov 2009) describes that before the printing advertising was dominating the industry. But now the social advertising has been dominated by foreign companies and the ads have become more indianised and customized.

This has changed the life of middle group and also the rural citizens. The strategy adopted have changed the social and cultural changes. Srivastava, Rajesh Kumar (2010) describes the effectiveness of advertising globally and it also says whether the age, gender, education, religion. The study was made among 1000 respondents. It is limited to India and SARC countries. In overall it says about the persuasion of people for advertsing. Stelios C. Zyglidopoulos; Craig E. Carroll; Andreas Georgiadis describes about the impact of media attention on a firm’s CSR “strengths” and “weaknesses.”

Drawing on social and organizational identity and stakeholder theory literatures, we develop and test two hypotheses concerning the influence that media attention has on these aspects of CSR. We find that increases in media attention are associated with increases in CSR strengths, but not with CSR weaknesses. Anita Pansari( February 19, 2011 ) has finded that women are dependent in India. They are used for the television ads. Finally she concluded by saying that Asian countries curtural values are not changed like the other nation. Hence Ansian womens are different from the parts of the world.

Eric A. Feldman ; Ronald Bayer (Dec 2011) states that the tobacco consumption is injurious to health. Through advertising the rate of tobacco consumption has reduced in the developed countries. Likewise in India also it will have an positive impact on social advertising. Agarwal.A (july 1995) enhance about the awareness of health care social ads in the region of Uttar Pradesh, Bihar, Madhya Pradesh for nearly 28 villages. This study has founded that the exposure of mass media may not be suited without formal and informal systems in the community which can promote health hazards in rural India. Vaidya, S.G., Vaidya, J.S., Naik, U.D (Sep 1999) has evaluated and finded that due to the advertisement for Wills during the series of match had created a negative impact on the youngsters.

The ads should not spoil the young lives which may become a major drawback in the future in India. Goenka, S.a, Prabhakaran, D.a, Ajay, V.S.a, Reddy, K.S.b (Aug 2009) describes about the cardiovascular disease and it can affect the population. This can be reduced bt avoiding tobacco . The comprehensive measures for effective prevention of CVD in India are national health imperatives which require multisectoral, multi-level and multi-disciplinary co-ordination and action.

Social Advertising in India has been growing and it has a greater positive impact on it. It helps all the communities people, rural or urban citizens to attain a worth and useful messages for their better way of living without harmful. It is applicable for both the environment in which the people belongs to and also to the society. Advertising creates awareness to the younger generations who may spoil their lives without knowing the importance of it. The social utility of advertising is to inform society of the existence of products and services which may (or may not) improve the lives of the individuals within that society. Consumers are gaining control over the advertisers, so the advertising companies need to change their strategies.

Now regarding the present issue of Assam, it has been stated that due to social network and ads, the information passes very easily to everybody from which they take advantage to misuse it. This may be an disadvantage of social advertising. Social Advertising helps through its network by connecting the people in India. From the study we wanted to conclude that nearly 20% of demerits is there in social advertising and 80% benefit we people attain from it. Hence, In India it has a greater positive impact on “Social Advertising”

Impact of Social Advertising in India. (2016, Nov 30). Retrieved from https://studymoose.com/impact-of-social-advertising-in-india-essay 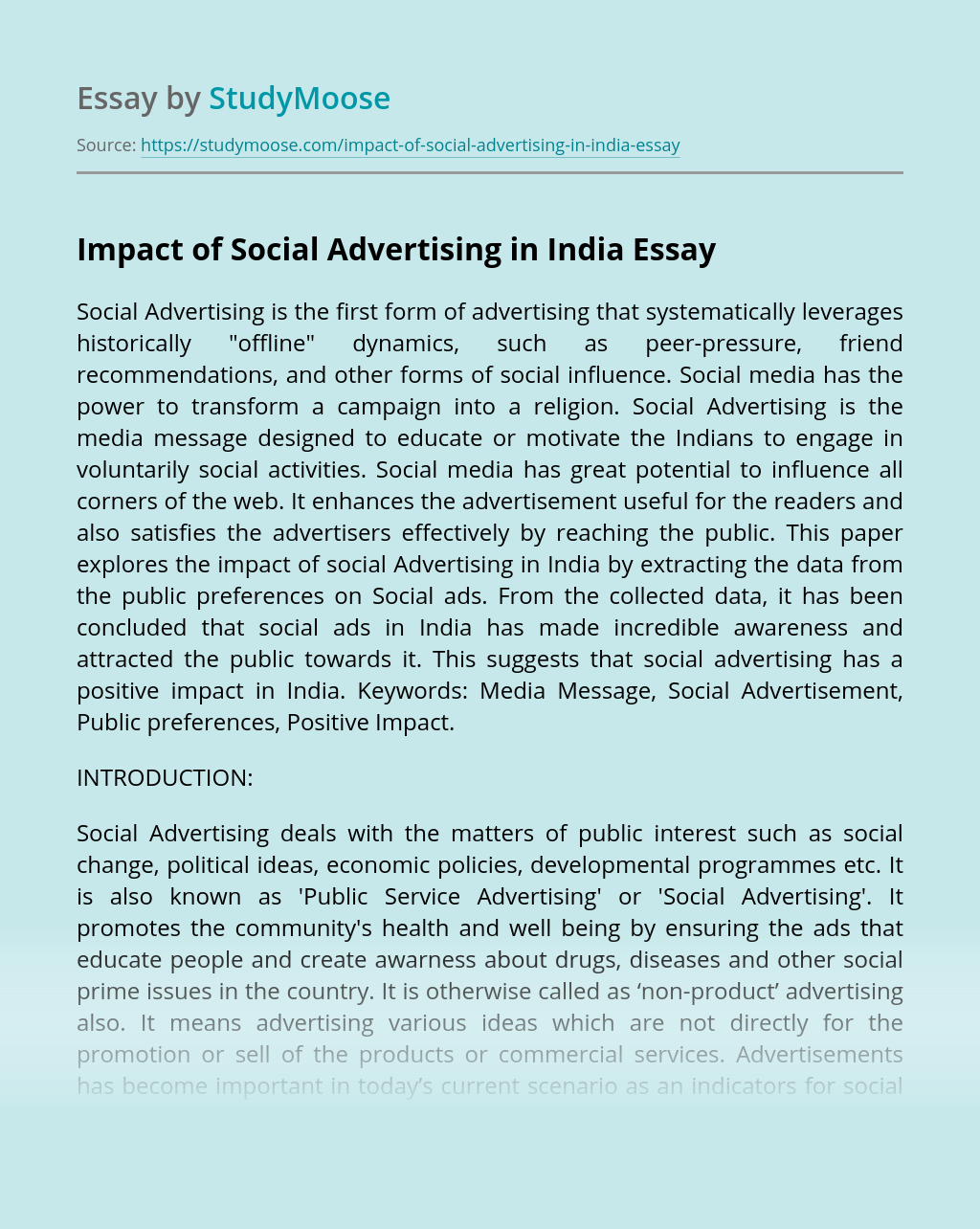 Pepsi Co. and Coca-Cola have been in business for a long time and both are largely successful companies in the beverage industry. They both have different brand components in comparison. A few of the different comparisons would be pricing, quality, packaging, logos, brand equity and features. In the following paper we will discuss these items...

For many years when it started, advertising was a divine gift to the mass media. It embodied the epitome of information superhighway during the time when it was starting as it allowed consumers to get information about products and services at the comfort of their homes, while reading the newspaper for instance, or perhaps while...

INTRODUCTION Influencer marketing has emerged as one of the fastest-growing social marketing practices as brand marketers look to connect with consumers and customers in meaningful and authentic ways often through the collective voice of active bloggers that are passionate and vocal about the brands they love. It represents a form of Word of Mouth marketing,...

Advertisements are an everyday part of our lives, whether we look at them subconsciously or consciously they influence us. Imagine how many ads you have seen in your lifetime and how they have affected you over time. “Two Way a Woman Can Get Hurt” by Jean Kilbourne is an article about how the objectification of...