The genus Proteus, according to Bergey’s Manual of Determinative Bacteriology, is a group of straight rod Gram negative bacteria around 0.4-0.8 μm in diameter and 1-3 μm in length. In the microscopic test done, it was seen that the unknown culture contained rods that are on the shorter side, thus was identified as bacteria that appear to be coccobacilli. Because of the presence of peritrichous flagella, species included this genus are motile and most strains swarm in periodic cycles, producing a characteristic concentric swarming pattern, or spread in a uniform film over nutrient media solidified with agar or gelatin, which is evident in the streak plates done over the course of a few weeks, the streak plates showing the bacteria spreading throughout the entire agar plate with a hazy, cloudy appearance.

Don't use plagiarized sources. Get your custom essay on
“ Impact of Proteus Mirabilis on Human Health ”
Get custom paper
NEW! smart matching with writer

Motility of the unknown was also proven through the indirect method of inoculating Motility S medium.

Like other members of the family Enterobacteriaceae, it is also facultatively anaerobic, and the unknown culture was proven to be as such through the use of Fluid Thioglycollate Broth, or FTB medium.

The genus Proteus is known to catabolize glucose and a few other carbohydrates, with the production of acid and usually gas. As for the unknown, it was able to ferment glucose (without the production of gas, as the Durham tube placed inside the PR Glucose was not displaced) and sucrose, but not lactose. The abovementioned genus is also indicated to produce a negative result in oxidase test and a positive result in catalase test, and the unknown produced negative and positive results in those tests, respectively.

The genus is also indicated in the Bergey’s manual as having a positive result in the methyl red (MR) test; however, the unknown initially produced a negative result (after adding 8-10 drops of the MR indicator, the unknown’s color changed to a yellow-orange result) which is the sole discrepancy in this report.

However, it is possibly important to note that after a short while, the contents of the tube containing the MR test changed back to a shade of red, possibly indicating that the culture is indeed methyl red positive. Other notable characteristics of this genus are the following: species vary results in indole, Voges-Proskauer, and Cimmons citrate test; Proteus produces negative result in lysine decarboxylase and a positive result in both phenylalanine deaminase and urease test; H2S is usually produced; and gelatinase production is usually positive. A series of tests must be conducted to further eliminate other candidates for the identity of the unknown organism, this time to identify the unknown’s species name. With the use of Bergey’s Manual of Determinative Bacteriology, such tests are indicated as follows: indole test, Voges-Proskauer test, cysteine desulfurase test (H2S production), test for ornithine decarboxylase, acid production in maltose and D-Xylose.

According to Bergey’s manual, only Proteus mirabilis decarboxylates ornithine, resulting in a positive ornithine result. Ornithine is a part of the various tests contained in the Enterotube II test, which was done last in the identification of the unknown organism in the laboratory work. The Enterotube II system inoculated with the unknown organism showed a positive result for the ornithine test, which further establishes the unknown organism’s identity as Proteus mirabilis. Furthermore, the code that resulted from the system was either 23007 or 22007, due to a discrepancy with the H2S test in the Enterotube II tube (there was black precipitate present in the tube; however, the coloration in the medium after inoculation and incubation was brown, which the laboratory manual, entitled Benson’s Microbiological Applications, indicated should not be confused with true H2S production). Given this dilemma, it was decided by this student to look through both organisms labeled under 23007 and 22007.

These two codes only named one sole organism, which was, again, Proteus mirabilis. The abovementioned results taken led this student to believe that the identity of unknown number 4 is Proteus mirabilis. Other tests that may be used are the following: acid production in maltose is present (positive) for all species of Proteus except for Proteus mirabilis, which has a negative result for the said test. The D-Xylose acid production test also results in a positive test for all Proteus species except for Proteus myxofaciens, and thus can be used to eliminate the said test. The Proteus genus may be found in intestines, colon and perineum of humans and also a wide variety of animals, and may also occur in manure, soil, sewage, as well as polluted waters. The genus is also becoming increasingly associated with pediatric illness, including neonatal meningitis and pediatric urinary tract infections, but infections of other organ systems have been described.

Most cases of central nervous system infection caused by Proteus occur in neonates, and contiguous spread to the brain from localized infections is reported occasionally. According to a journal article published in the Journal of Medical Microbiology, Proteus mirabilis is an important pathogen of the urinary tract, and is the primary infectious agent in patients with indwelling urinary catheters. Furthermore, individuals suffering from urinary tract infections caused by P. mirabilis often develop bacteriuria, cystitis, kidney and bladder stones, catheter obstruction due to stone encrustation, acute pyelonephritis, and fever. 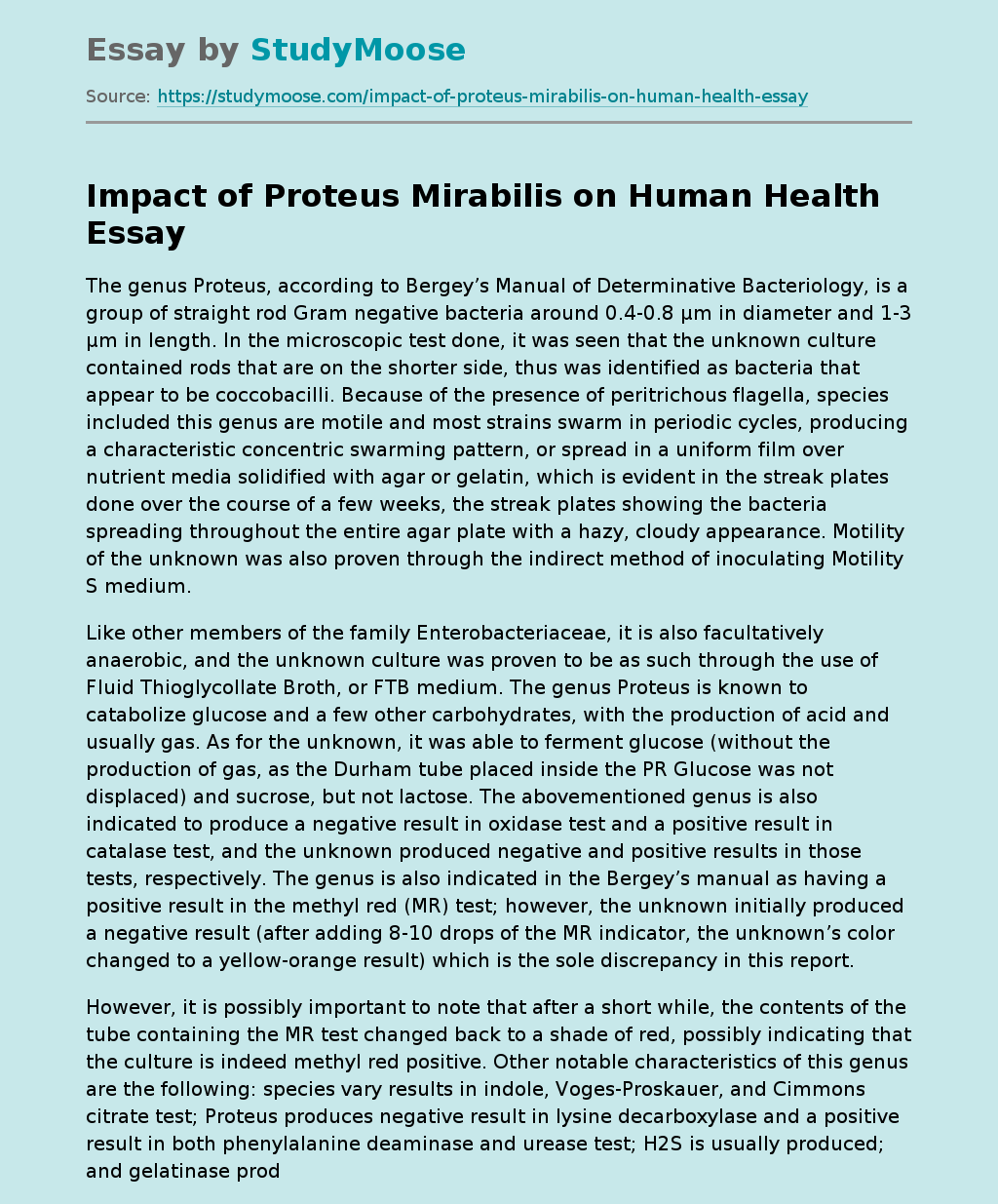