Impact of Pollution on the Marine Environment

Industrial ecologist Dr. Roland, and colleagues, from the University of California in Santa Barbara published a scientific paper in July in the journal of Science Advances in which they calculated the total volume of all plastic ever produced at 8.3 billion tonnes. Of this, about 6.3bn tonnes is now waste – and 79% of that is in landfill or the natural environment. And it is also predicted that by 2050, there is going to be an increase to four garbage trucks per minute disposing of rubbish.

Don't use plagiarized sources. Get your custom essay on
“ Impact of Pollution on the Marine Environment ”
Get custom paper
NEW! smart matching with writer

At the moment The North Pacific gyre already contains at least 100 million tons of garbage, these statics correctly convey the distasteful state in which we are leaving our oceans.

There are many consequences of marine pollution like the depletion of oxygen content in the water, causing dead zones, and of course the effect of toxic wastes on marine wildlife, disrupting the cycle of coral reefs and causes failures in the reproductive system of marine animals which can lead to their extinction.

Over 1 million seabirds and 100,000 marine mammals are affected yearly, as well as many other land based species. For example, sea turtles are often found having ingested plastic bags and fishing gear, this is because they mistake it for prey such as small fish and jellyfish.

Old fishing gear which is disposed of in our oceans such as, fishing lines and can trap and drown animals like dolphins, porpoises and whales. Even humans aren’t free from the potential dangers of the Great Pacific Garbage Patch. Microplastics have been found in the stomachs of nearly half of the most important species for global fisheries.

This means we could be eating our own trash. Microplastics have a large human health, it is the smallest particles — micro- and Nano-particles which are of greatest concern. Particles must be small enough to be ingested. There are several ways by which plastic particles can be ingested: orally through water, consumption of marine products which contain microplastics, through the skin via cosmetics (identified as highly unlikely but possible), or inhalation of particles in the air.

One of our most consequential problems are microplastics, although we aren’t able to see the negative impacts immediately as most of the microplastics found in fish are in the guts, the future is a lot less certain. As microplastics slowly but surely break down into even smaller Nano plastics, those plastics will be able to even enter muscle tissues after being ingested which then endangers our safety since that is the part of fish we do eat.

Microplastics not only affect our health but mainly marine animals. Marine animals often mistake and eat microplastics because of their small size, the plastic contains harmful chemicals, this is what increases the chance of disease and affect reproduction, which as previously said can be the cause of the extinction of certain species. After ingesting microplastics, animals like seals, suffer for many months, even years before they eventually die a painful and drawn-out death. A study in 2014 even estimated there to be 15 to 51 trillion microplastic particles floating around in our oceans, weighing between 93,000 and 236,000 tonnes.

How Marine Pollution is Managed: Australia

A major source of introduced marine pests is ballast water, according to Australia’s Department of the Environment and Energy. Department of Agriculture has the responsibility to ensure that foreign ballast water is properly being managed according to the Australian Ballast Water Management Requirements before being allowed to be disposed of in Australia’s territorial sea. The Department of the Environment and Energy is also quoted stating that “Australian ballast water management requirements are consistent with International Maritime Organisation (IMO) guidelines for minimising the risk of translocation of harmful aquatic species in ships’ ballast water.”

To receive a National Cooperative Approach to Integrated Coastal Zone Management, the NPA of Australia builds on the Framework and Implementation Plan for and illustrates some specific activities of Australian governments to address sources of pollution that are land-based, this was in response to the shore-based and in-water maintenance contamination and biosecurity risks of vessels and movable structures.

There are three generalised solutions to marine pollution firstly, is the replacement of plastic solution, or the use of biodegradable plastics instead. This entertains the idea of replacing plastics with something similar properties but lacks the long-lasting damaging properties of regular plastic that destroys our oceans. When we use these biodegradable materials, by the time it reaches a gyre or other garbage patch, it has already completely decomposed leaving only solely organic materials. Secondly, there are the solutions which propose the removing of the plastic from our oceans. These are the types of efforts that consider manual or semi-manual labour by collecting trash, while also encouraging positive change. However, to undo the high volumes of plastic we produce and dispose of every year, is thought of as impossible. Lastly, is the solution which outlines the real issue, that we are the problem, our actions are what causes marine pollution, but luckily our actions are also the solution. These are the changes we can make on a daily basis to decrease our harmful impact on the environment.

Project AWARE is a non-profit organization working with volunteer scuba divers in countries like the UK, US, and Australia. Project AWARE supports divers acting to protect and clean the ocean in their own communities, with the main focus being a focus on implementing lasting change in marine pollution. Project AWARE works to reduce underwater impacts of marine debris and prevent trash from entering the ocean in the first place.

Project AWARE works with businesses, NGOs and governments through Partnerships Against Trash, to uphold their long-term solutions, thereby influencing waste management policies not only on local levels but also on, national and international levels. They have also developed a flagship citizen science program, Dive Against Debris, the first and only marine debris survey of its kind focused on scuba divers reporting the types and quantities of debris found on the ocean floor. By using and sharing the reported data by Dive Against Debris volunteers, they are spreading knowledge, thereby helping structure convincing arguments for change. Project AWARE has also launched Adopt a Dive Site to further prevent land-based pollution from affecting marine life. Adopt a Dive Site participants’ surveys help inform and thereby improve the health of our ocean ecosystems, but more importantly, they provide crucial information concerning marine debris to help inform policy change.

Impact of Pollution on the Marine Environment. (2021, Feb 05). Retrieved from https://studymoose.com/impact-of-pollution-on-the-marine-environment-essay 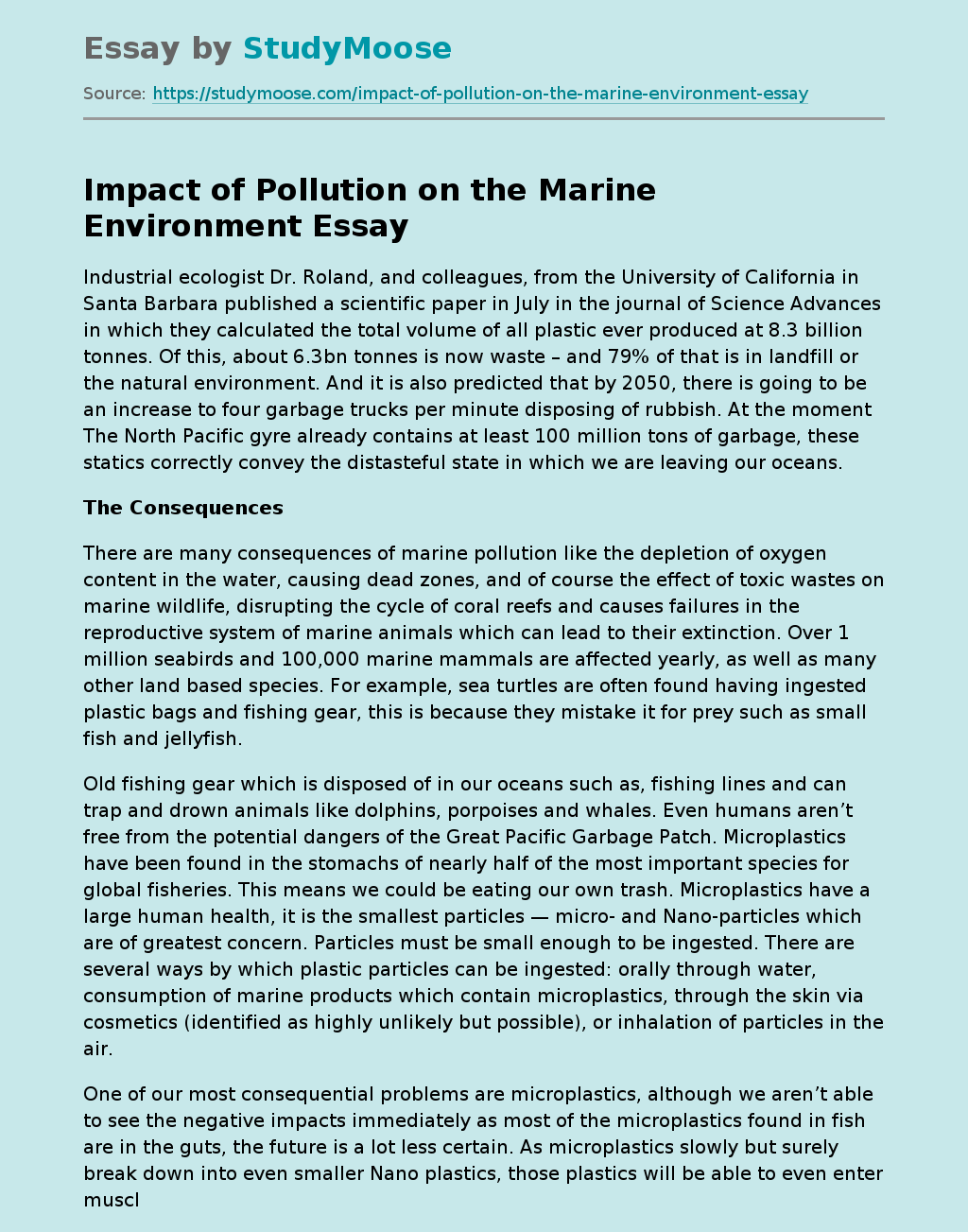