Don't use plagiarized sources.
Get Your Custom Essay on Impact of Macroeconomics Variables on Stock Prices Just from $13,9/Page

In graph one the decline in the stock market asset price causes the AD line to shift downward, decreasing. The long-run equilibrium in the first graph is the point where all three of the lines (LRAS, S1, and D1) are connecting. With a lower GDP, the aggregated demand curve shifts to the left (D1 to D2) creating a new equilibrium point at a lower price level.

It shows both the old and new equilibrium along the LRAS curve. The first one being higher than the other when the shifts to the curves happened it caused the equilibrium to shift down the LRAS curve because of the lower price level. Therefore, there is a wealth decrease due to a decline in the stock market asset price causes the lines to shift causing the price level to lower and the output to increase. b. Assume the government lowers taxes, which increases the household’s disposable income. However, the government purchases (spending) remains the same. (See the set of graphs below and shifts in graphs)

In graph one the aggregate demand curve shifts from D1 to D2 as government lowers taxes and household disposable income increases. It shifts outward to the right because there is an increase because the quantity of output demanded for a given price level rises. The shift represents an expansion. The long run equilibrium is where the LRAS, AS and AD intersect with one another. The second graph the AS line shifts to the left from S1 to S2 because there is a decrease in aggregate supply caused by the increase in input prices. This creates two different equilibriums the second one is created from the shift in the AS curve. On the third graph it shows all the changes made to the economy through the AD/AS line shifts. The AS line shifts from S1 to S2 and the AD line from D1 to D2. The lower equilibrium shows when all three lines are intersecting. It is the contractionary policy causing output and the price level to decrease in the short run, but only the price level to decrease in the long run.

The higher equilibrium shows agree when all three lines are intersecting. It is the expansionary policy causing output and the price level to increase in the short run, but only the price level to increase in the long run. 2. Suppose the economy of a hypothetical country has reached its long-run macroeconomic equilibrium when each of the following aggregate demand shocks occurs. What kind of gap, inflationary or recessionary gap, will the economy face after the AD shock indicated by the shift in AD curves? What types of fiscal policy instruments will help move the economy back to the potential level of output (real GDP)? Give specific examples. a. At the long-run macroeconomic equilibrium, the stock market boom occurs and this increases the value of stocks households hold. (See the set of graphs below and shifts in graphs in the two-steps)

A positive demand shock increases demand. Shown in graph one is the increase in the demand curve from SRAD1 to SRAD2 because of the positive demand shock. What an increase in demand does is cause more goods to be consumed at a higher price. This is why the shift occurs to the right of the demand curve because there is more of a demand for the goods being produced. An inflationary gap is when there is a gap between the level of real GDP and the potential output basically when the real GDP is greater than the potential. In the graphs because of the demand shock it shows an inflationary gap with the AS and AD curve intersecting on the right side of LRAS curve.

To refresh a positive demand shock increases demand. The positive demand shock is occurring in the graphs due to the increase in spending because of the natural disaster. In graph one the SRAD shifts from SRAD1 to SRAD2, which is a sign of the positive demand shock. It means that more consumer goods are being consumed than produced. It causes the curve to shift to the right because of the increase in demand. This causes the government to take action in order to bring it back down to normal, stabilize it. The intervention is shown in graph two where the government stepped in and it brought the SRAD curve back down to its normal position SRAD3. An inflationary gap is in these graphs because of the shifts to the SRAD curve.

An inflationary gap is when there is a gap between the level of real GDP and the potential output basically when the real GDP is greater than the potential. The inflationary gap is where the AS and AD curve intersect on the right side of the LRAS. Usually during an inflationary gap the government increases taxes in order to suck money out of the economy. This could also be done through the fiscal policy that dictates government-spending decreasing, which would also cause a decrease in the money circulation. The goal of the fiscal policy is to even out the business cycle. Assume the Central Bank reduces the money supply in the economy, which leads to an increase in the interest rates. (See the set of graphs below and shifts in graphs)

A negative demand shock decreases demand. A negative demand shock usually encounters less quantity of goods being consumed, and the consumers still within the market pay a lower price for the good. Usually during these times the economy wants to ignite the fire through decreasing taxation-giving people more money to spend. In graph one we see the negative demand shock happening when the SRAD1 shifts to the SRAD2. This change causes a recessionary gap where the SRAD2 and the S1 intersect. A recessionary gap usually indicates that the economy is about to fall into a recession, which is defined by the lower real GDP (level of income) then the full-employment level.

This puts downward pressure on pricing in the long run. Consumer spending is down and businesses are not making considerable profits. During a recession means they need to pump money into the economy through the government creating jobs and wages. This happens with the government intervention in graph two where the SRAD2 goes back to the SRAD3.

Impact of Macroeconomics Variables on Stock Prices. (2016, May 19). Retrieved from https://studymoose.com/impact-of-macroeconomics-variables-on-stock-prices-essay 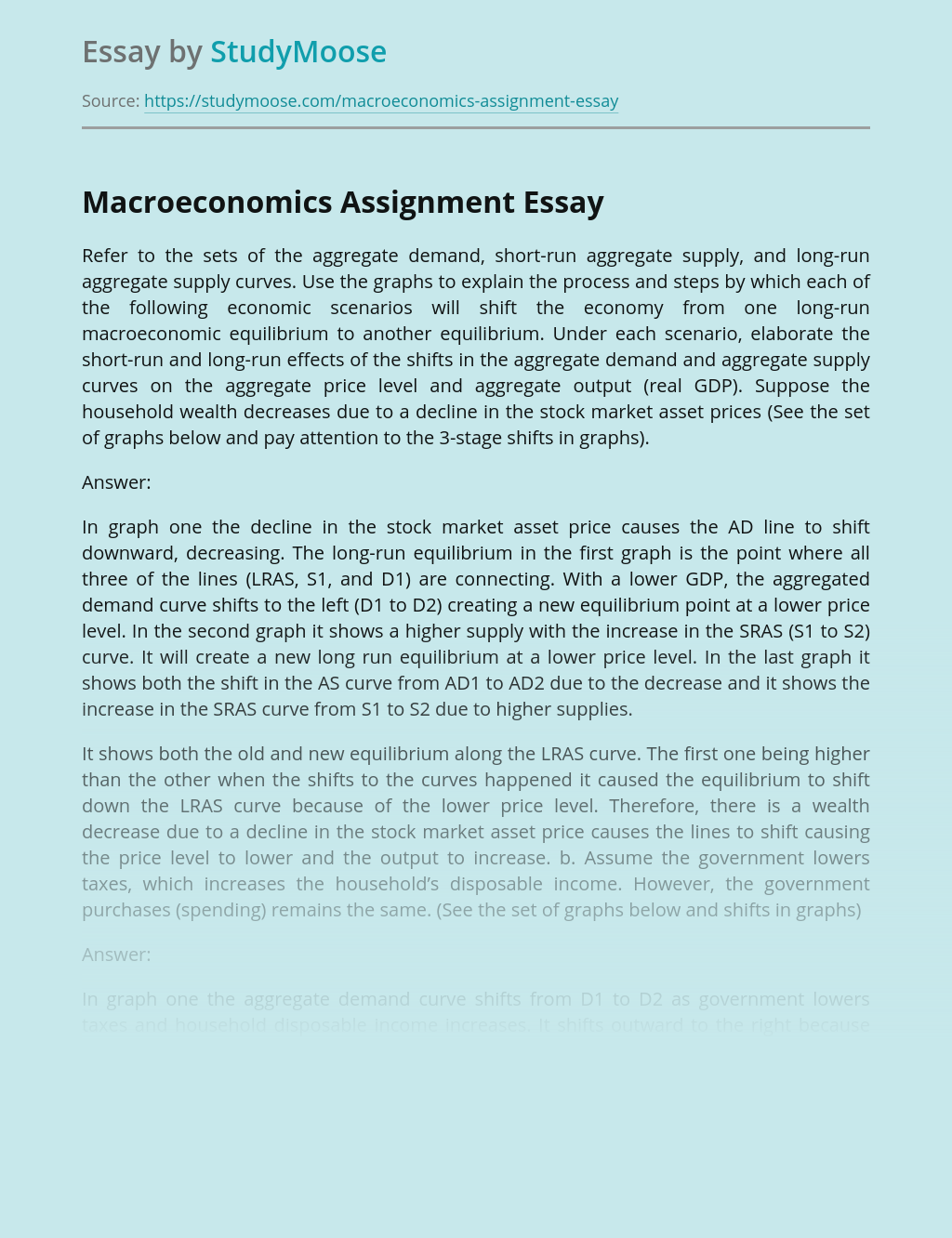 The sum of pragmatic substantiation on the interaction between reimbursement stratagem and national culture and echelon of trade and industry progression of an economy is virtually not anything (Harvey, 1993). Due to the advent of globalization and the constantly rising total of international business, the Society for Human Resource Management International has observed that several...

In this project i am going to be taking about life factors that would effect a child, these aspects include; genetic elements, biological influences before birth, enviromental influences, social- financial factors and way of life. The very first is Genetic aspects these are factors that would be inherrited by the child from the mom and...

Get Essay
Walmart Company.Risk and the required rate of return

The spectrum of market structures varies diversely from extremely competitive markets where there are a large number of buyers and sellers, each of whom having little or no power to modify the marketplace price to a circumstance of pure monopoly where a market or an industry includes one single provider who delights in substantial control...