Impact of Islam on Indian culture

There is a close relationship between Islam and Indian. Islam is a religion that is based on Quran which explains revelations from god and is believed that it is unaltered throughout the decades. There is about 1.57 billion supporters which is the same number as of 23 percentage of earth’s population. It is the second-largest religion in the world and it is still growing fast. The support of Islam is called a Muslim. Islam’s prophet is Muhammad who was born in Mecca, was caravan merchant and he often recites Quran.

Don't use plagiarized sources. Get your custom essay on
“ Impact of Islam on Indian culture ”
Get custom paper
NEW! smart matching with writer

There are five important pillars of Islam which are the basic concepts of worship, explaining Islamic law as well as every side of society and life and it also provides instruction about many things about environment, welfare, banking, etc. Five pillars are categorized as faith, prayer, haji, charity and ramadan.

Reading Quran is highly recommended for muslims but it is not one of those pillars. In Islam, god is called Allah.

There is a well-known sentence which people call Declaration of faith. It is “There is no god but god (Allah) and Muhammad is his messenger”. This quote implies that there is only one god who is Allah and all other ones are fake. Muslims believe that God is incomparable and the purpose of existence is to perform and serve Allah.Most muslims are either Sunni or Shia and approximately 13 percentage of Muslims live in Indonesia, the place with the largest Muslim-majority country and they have influenced on Indian culture heavily.

Then how Islam has influenced Indians culturally and politically? Islam entered India in the 10th century A.D and created more ethnic complexity. When other ethnicities such as Greek, Mongolian, Parthian, and Scythian conquered India, they became Hinduised completely and assimilated with Indians. However Islam did not negotiated with Indians because Islam is monotheistic religion. Since total of four groups which are mughals, pathans, sayyeds and sheikhs did not unite with Hindu society, Indian ethnic system became much more complex.

They created their own system, similar to caste system. Brahmins turned into Sayyeds and the rajputs who are descendents of Kshatriya merged into sheikhs, mughals and pathans. Before Isalm influenced Indians, their society was not divided into two separate societies even though they had two religions which are Buddhism and Jainism. However Islam established India society into either Hindus or Muslims.

Islam also brought Sufism to India. Sufism began as teaching religion more deeply in the Middle East about the Truth of Islam from Mohammad. Sufism involves an enlightened inner being with god and is an actualization of divine ethics. The practice of Sufism is selflessly involving with going forward with the truth by meaning of love and devotion. It could be called the way towards God or the spiritual path. The very basic concept of Sufism is to minimize individual identity as much as possible. One of other concepts of Sufism is that every religion offers a way to enlightenment and to true god realization, regardless of how it is fulfilled.

It states that any god from any religion is all in equal position because they are derived from the same divine source. At first, the term Sufi was applied to those who had fully realized God, however it has became common to anyone who follows that particular spiritual way. Sufism is an important part of Islamic culture and society that also affects hugely in India. Related to Sufism, Islam propelled the Bhaktic cults. It is movement that is emotionally bonding with goddesses. It was often expressed as chants, dances and drugs. The goal of this movement was to purify of the existing system. It affected greatly on many religious leaders. Bhaktic cult Muslim and Hindu traditions devoted on emergence of the new religion called Din-I-Illahi by Akbar later on.

Culturally, Islam impacted Indians by teaching them forcefully and tested them on their faith. Islam made them adopt Muslim culinary. They adopted one of Muslim’s custom which is wearing sherwani, achkan, kurtha and pyjama. They also controlled Hindu women by imposing pardah. They had to wear pardah forcibly from being invaded or kidnapped. Islam also contributed in Art and literature in Hindu society. Islam constructed their places such as durbars and mosques which are ways to worship Allah in every country they conquered.

There were often schools next to the mosque where people could learn and study about Quran. As Islam were developing their territory in India, many great schools, universities, libraries were established which led Indians to be more knowledgeable. They also remodeled many temples that were previously ruined or damaged. They introduced of creating beautiful gardens in many places in India. Not only in the field of architecture, had Muslims done much on practicing of music which is a blend of Persia and Hindu. They invented many new musical instruments like Sarangi, Sitar and Tabla.

Other than those examples that were mentioned previously in the essay, there are plenty of other things that Islam has influenced Indians. There were times that Indians had to follow what they did not really wanted, but with Islam’s help India was able to develop as a better, strong country in many different ways. They were able to have a better school system, more developed music and arts, overall more comfortable life for people. It is crucial to know about Islam and their culture as well as their background in order to understand Indian society.

Impact of Islam on Indian culture. (2016, Aug 04). Retrieved from http://studymoose.com/impact-of-islam-on-indian-culture-essay 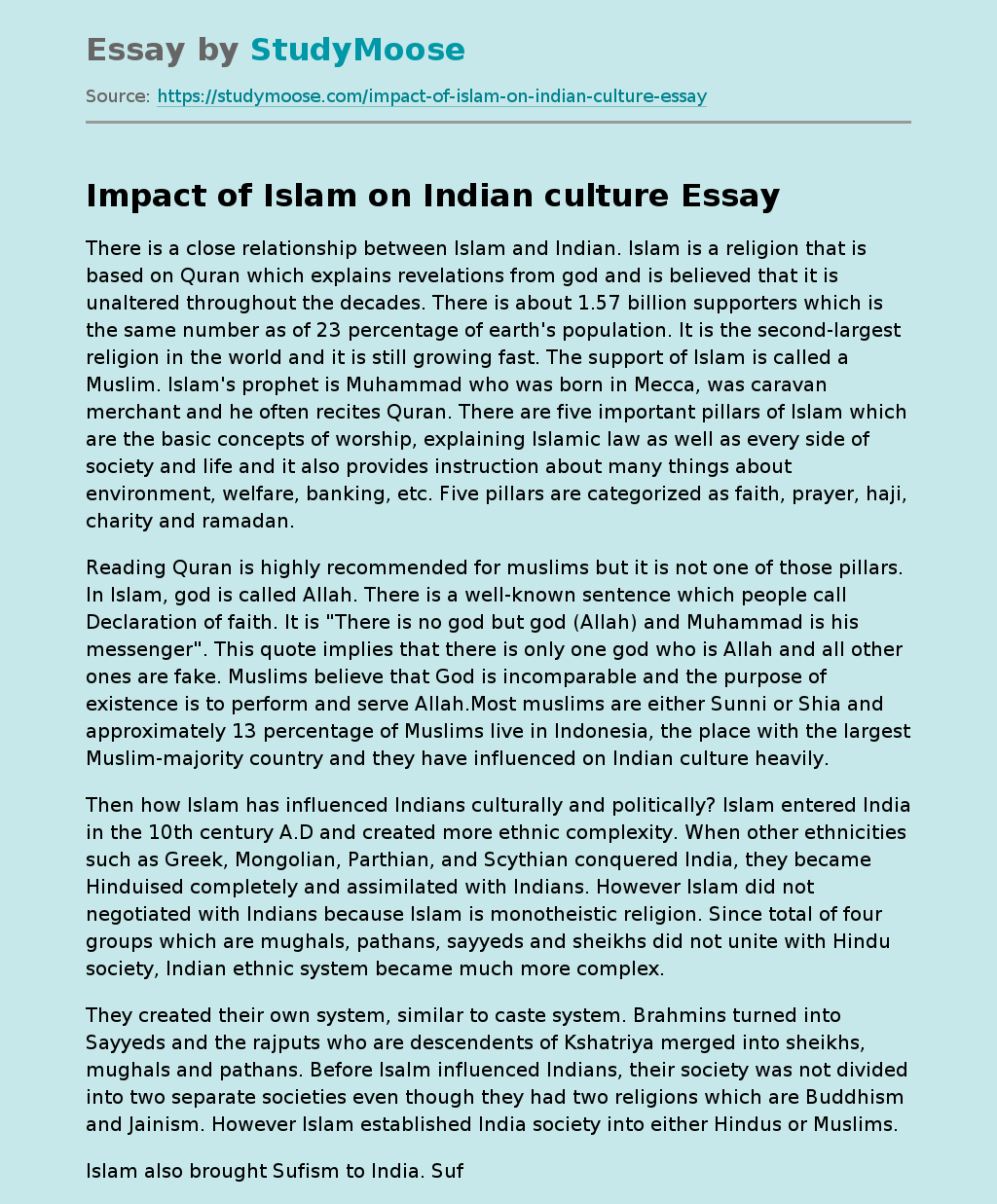