IMpact of industrialisation in indias economy

Turn in your highest-quality paper
Get a qualified writer to help you with
“ IMpact of industrialisation in indias economy ”
Get high-quality paper
NEW! AI matching with writer

Industrialization makes possible the optimum utilization of the scarce resources of the country. It helps in increasing the quantity and quality of various kinds of manufactured goods and thereby make a larger contribution to gross national product. (GNP).

Industrialization helps in increasing the value of output per worker. The income of the labour due to higher productivity increases. The rise in income raises the living standard of the people.

Industrialization is the best way of providing economic stability to the country. A nation which depends upon the production and export of raw material alone cannot achieve a rapid rate of economic growth. The uncertainties of Nature, the restricted and fluctuating demand of the agricultural raw material hampers economic progress and leads to an unstable economy.

4. Improvement in balance of payments.

Industrialization brings structural changes in the pattern of foreign trade of the country. It helps in increasing the export of manufactured goods and thus earn foreign exchange. On the other hand the processing of raw material at home curtails the import of goods and thereby helps in conserving foreign exchange.

The export orientation and import substitution effects of industrialization help in the improvement of balance of payments. In Pakistan, the exports of semi manufactured and manufactured goods showed favorable trend.

5. Stimulates progress in other sectors.

Industrialization stimulates progress in other sectors of the economy. A developments of one industry leads to the development and expansion of other industries. For instance the construction of a transistor radio plant, develops the small battery industry (backward linkage). The construction of milk processing plants adds to its line of production ice cream. cone cream plants etc.. (forward linkage).

Industrialization provides increased employment opportunities in small and large scale industries. In an agrarian economy, industry absorbs underemployed and unemployed workers of agricultural sector and thereby increases the income of the community.

Industrialization promotes specialization of labour. The division of work increases the marginal value product of labour. The income of worker in the industrial sector is therefore higher than that of a worker in agricultural sector.

Industrialization provides machinery like tractors thrashers harvesters, bulldozers, transport, aerial spray etc, to be used in the farm sector. The increased use of modern inputs has increased the yield of crops per hectare. The increase in the income of the farmers has given boost to economic development in the country.

The industrial activity compared to agricultural is easy to control. The industrial production can be expanded or cut down according to the price cost and demand of the product.

Industrialization provides larger scope for on the job training and technological progress. The use of advanced technology increases the scale of production, reduces cost of production, improves quality of the product and helps in widening of the market.

11. Reduction in the rate of population growth.

Industrialization leads to migration of surplus labour from farm sector to the industries mostly situated in urban centers. In cities improved facilities of sanitation and health care are available. People through the adoption of family planning measures, reduce the rate of population growth.

Industrialization increases the income of the workers. It enhances their capacity to save. The voluntary savings, stimulate industrial growth and by cumulative effect lead to further expansion of industry.

If a country is industrialized, it can manufacture arms and ammunition necessary for the defense of the country. A nation which depends on other countries for the supply of ammunition will eventually suffer and may face defeat. The two wars with India should be an eye opener for Pakistan.

The establishment and expansion of industries lessens the excessive pressure of labour force from the agriculture sector.

With the development of industries the market for raw materials and finished goods widens in the country. 16. Increase in the Government revenue. Industrialization increase the supply of goods both for internal and external markets. The export of goods provides foreign exchange. The customs excise duties and other taxes levied on the production of goods increase the revenue of the State. The income tax received from the industrialists adds to the revenue stream of the Government which eventually is spent for the welfare of the people as a whole. 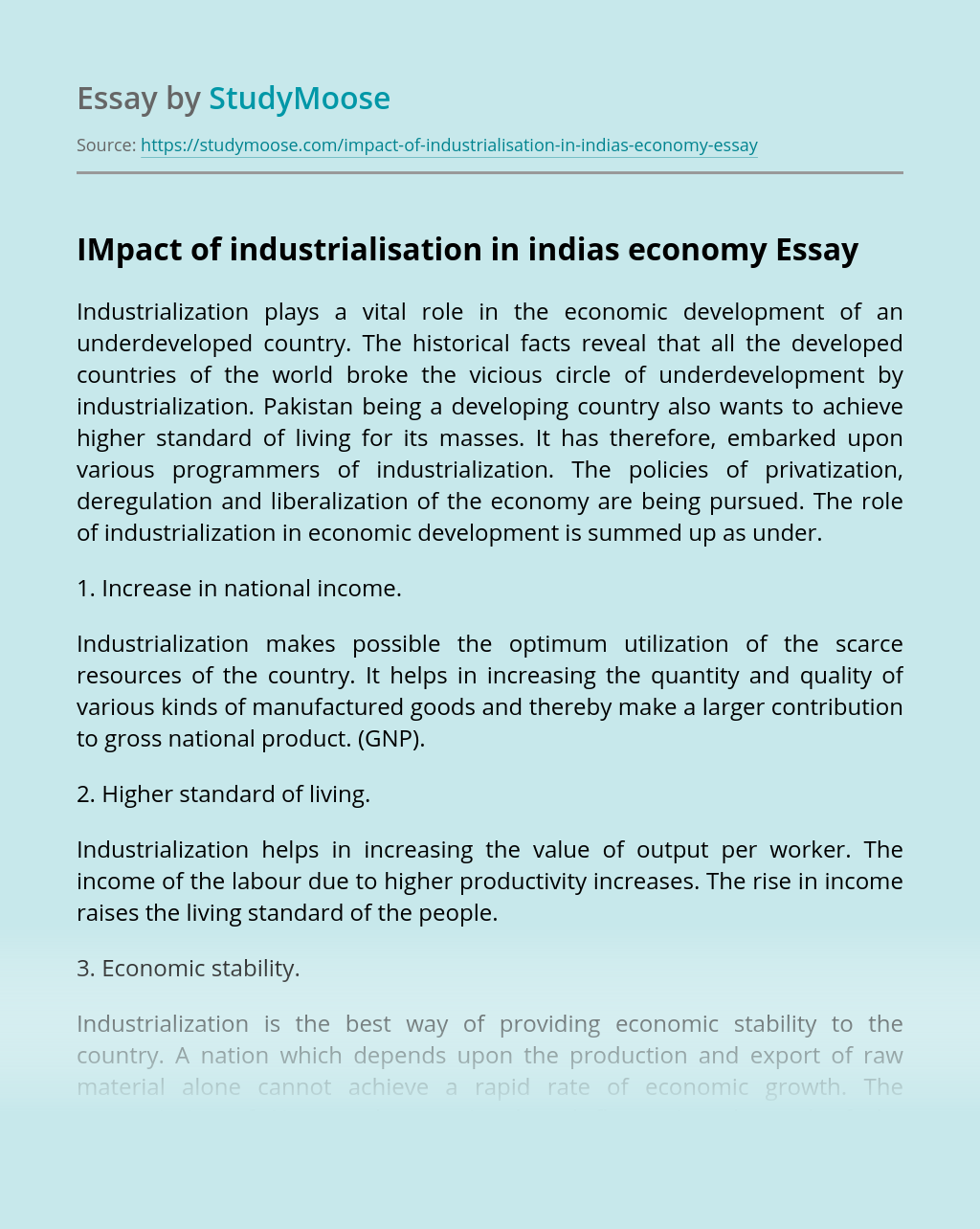 Turn in your highest-quality paper
Get a qualified writer to help you with
“ IMpact of industrialisation in indias economy ”
Get high-quality paper
Helping students since 2015
Stay Safe, Stay Original