Impact of Gun Violence in America

The constitution of America has various amendments that provide many kinds of leverage to its people, like right to vote, right to speech etc. Among them, one of the most controversial amendment is Second Amendment which gives people right to bear weapons like gun, for their safety. Safety is one of the basic needs of people and they should be provided to the people. However, the word ‘safety’ is a critical term here; is it really safe to have people carrying guns in your surrounding? I am afraid it is not.

Don't use plagiarized sources. Get your custom essay on
“ Impact of Gun Violence in America ”
Get custom paper
NEW! smart matching with writer

And about the intention of people carrying guns; are we really sure that the people carrying guns do not mean to harm other? Of course not. In this competitive world, people are full of stress, jealousy and everything changing so fast it is really hard to trust people with gun whatever their intention would be.

Many people argue that Second Amendment was ratified in the first place because there was a good reason for ratification and that is self-defense. To some extent, it is true because many times, we could trust no one but ourselves. However, there is a huge difference between the time frame when the constitution was ratified and now. With fast growing technology, the guns have become much more powerful than they used to be, they could create much more harm than they could de at the time when Second Amendment was ratified.

“On Oct 1 2017, 59 people were shot dead with 527 more injured after 64-year-old man fired shots for around 7-10 minutes in Las Vegas mass shooting.” (Blankstein). This is a big deal, and it clearly explains how destructive guns could be nowadays. This was definitely not the case when Second Amendment was ratified.

Therefore, guns are not the safety measure anymore, they are threats to people. It might be easy for people to say that mass shootings are rare and sometimes tragedy happens which does not mean other people can carry guns. But deaths caused by guns in criminal attack is too high to ignore, let alone the tragic events of mass shooting. According to Emma E. McGinty, “Although mass shootings are rare compared with other forms of gun violence— 65,000 persons in the United States are shot in criminal attacks each year —extensive news media coverage of mass shootings draws public attention to the problem in a way that “everyday” gun violence does not” (McGinty 406). Those deaths may have been caused by different reasons, but the common thing in all of the cases is that, they are all caused by gun attacks. We cannot generate the actual facts, but we can assume just how much deaths would have never occurred if those criminals did not have gun with them. We never know about the intention of people. People might want to own guns to keep themselves safe; they might want guns with intention to hurt others. President Barack Obama mentioned that, “A recent study found that about one in 30 people looking to buy guns on one website had criminal records—one out of 30 had a criminal record” (Obama 70). This fact shows that the legalization of gun is the way of giving criminals easy access to what they want. We can imagine how the criminals could easily commit crimes and keep their hands clean in the name of self-defense.

The statistics is just too high for us to be able to trust people that they will only use the guns for their self-defense. Thus, the legalization of gun is open threat for people. People who carry guns might not even know that the gun could be threat to themselves. Wolfgand Stroebe concluded that, “Gun prevalence is positively related to homicide rates. There is no evidence for a protective effect of gun ownership. In fact, gun owners have a greater likelihood of being murdered. Furthermore, gun ownership is associated with an increased risk of serious injuries, accidental death, and death from suicide” (Stroebe 30). This clearly explains that even the people who have good intention regarding their gun, would not be safe just because they have it. Sometimes, even for small argument which could be solved by negotiation, people get tempted to used guns at the peak of their anger. Thus, just the possession of gun could create violence even when not intended. Therefore, with the provision of gun to people safety is promised, but violence is guaranteed. When comparing safety provided and violence created by guns, it is too risky too still make it available for people. The Second Amendment of Constitution which gives right to people to bear arms and weapons should be regulated or reconsidered because people are not safe under that law anymore, in fact, they are in the potential risk of being the prey of criminals.

Impact of Gun Violence in America. (2021, Apr 06). Retrieved from https://studymoose.com/impact-of-gun-violence-in-america-essay 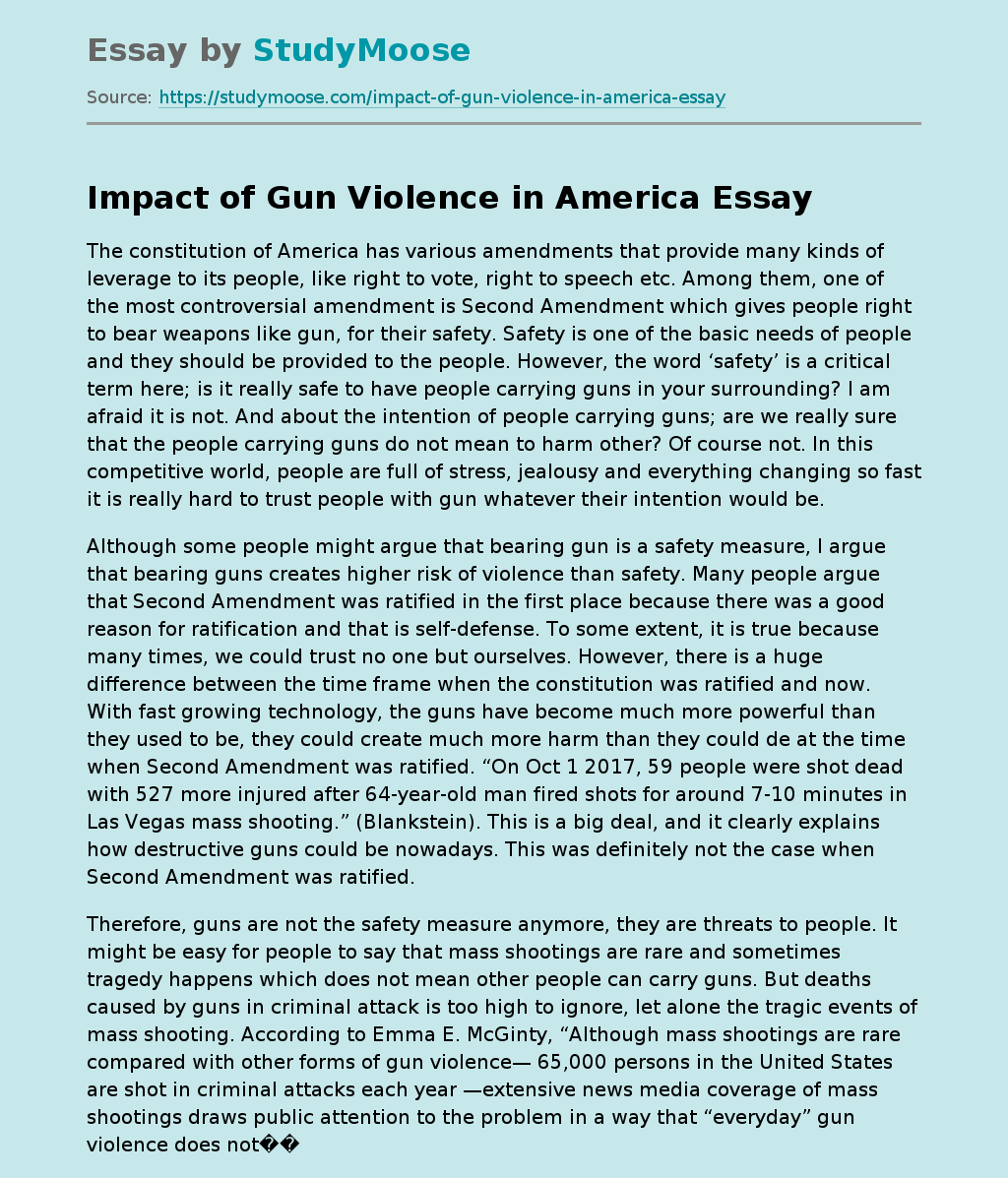