Greek mythology ‘s impact on modern societies cannot be understated. Modern language, industry, arts and culture all demonstrate the impact of Greek mythology in today ‘s world. For example, most people who have no formal knowledge of Greek mythology still know that Hercules was a strongman and that Venus (the Roman version of the Greek Aphrodite) is the goddess of love. The Impact of Greek Mythology on Language Very few people speak ancient Greek on a regular basis, but Greek mythology has shaped English and other languages on many levels.

Don't use plagiarized sources. Get your custom essay on
“ Impact of Greek Mythology on Western Culture ”
Get custom paper
NEW! smart matching with writer

A “Herculean task, ” for example, is one that requires great effort. This phrase comes from a myth about the Twelve Labors of Hercules. The drug morphine takes its name from the Greek God of Sleep, Morpheus. “Venereal disease ” is a rather unflattering reference to Venus. The goddess of love fares better in the term “aphrodisiac “, referring to any substance or circumstance that arouses sexual desire. To this day, an unpleasant woman may be called a “harpy ” (a winged monster with a woman ‘s torso and a bird ‘s feet).

Alternately, a handsome man is an “Adonis, ” the mortal man so beautiful that Aphrodite herself fell in love with him. We call computer viruses “Trojans, ” a rather unfair comparison with the Trojans, as we ‘re actually referring to the Greek-built Trojan horse, used by the Greeks to infiltrate Troy and end the Trojan War. The impact of Greek mythology on western culture and language isn ‘t confined to individual words. Many expressions, proverbs and clichs are direct references to ancient Greek myths.

For example, the expressions “caught between a rock and a hard place ” and “between the Devil and the deep blue sea ” both come from tales about sailors being caught between the monsters Scylla and Charybdis of Greek mythology. Other common expressions that demonstrate Greek mythology ‘s impact on modern societies include: • an Achilles heel (a single fatal vulnerability) • having the Midas touch (everything turns to gold) • lying in the arms of Morpheus (sleeping)

• opening Pandora ‘s Box (unlocking a world of trouble) • rich as Croesus (Croesus was known for his wealth) • the face that launched a thousand ships (a woman worth going to war for). Cultural Impact of Greek Mythology in the West Greek mythology ‘s impact on modern societies is often seen in the arts and popular culture. In the 1980s, the all-female rock band The Bangles had a top ten hit with the single Venus. Television shows and movies, such as Disney ‘s Hercules, have also reintroduced mythological figures to new generations, including characters such as Hades, the Lord of the Underworld. In fact, movies have been retelling versions of Hercule ‘s story since the 1950s. Some of the most famous works of art and literature demonstrate the impact of Greek mythology on western culture. Botticelli ‘s The Birth of Venus is one of the world ‘s most recognizable paintings. Operas often delve into Greek mythology, as well. Offenbach ‘s Orpheus in the Underworld is one of the most famous examples.

Great writers such as Dante, Shakespeare and Milton make frequent references to Greek mythology, so much so that an understanding of Greek myths is necessary to truly appreciate their works. American writer Nathaniel Hawthorne ‘s Tanglewood Tales is a collection of rewritten Greek myths. Science and Greek Mythology Greek mythology ‘s impact on modern societies can be seen on any clear night. Many constellations are named after characters or monsters from Greek myths, including Cassiopeia, Andromeda, Hercules and Gemini. All of the planets and most of the moons in the solar system are also named after Greek mythological characters, although the planets have been given Roman versions of the Greek names. Even our Earth was named after a Greek myth: Another name for our planet is “Gaia, ” the name of the Greek earth mother. Signs of Greek Mythology in Modern Societies The names of Greek mythology surround us today, sometimes in unusual places. Would Ajax, one of the great Greek heroes of The Iliad, be happy knowing he ‘s the namesake for a popular cleaning product? Sometimes, references to Greek mythology are appropriate. The Aegis is the shield used by both Zeus and his daughter Athena. Today, the Aegis Group is an insurance company, and the U.S. navy uses Aegis cruisers. In both of these instances, the reference to Greek mythology is clearly valid in that the insurance company and Navy boats provide protection, just as the Greek shield. At other times, the connection between Greek mythology and modern products is more tongue-in-cheek. A popular brand of condoms is named “Trojan, ” slyly alluding to the Trojan horse that allowed the Greeks to safely penetrate Troy ‘s defenses. Despite our sometimes questionable uses of Greek mythology in contemporary culture, its impact on modern societies cannot be understated. References to Greek myths abound. In fact, Greek myths even influence our maps. A collection of maps is an Atlas, named for the titan who held up the earth. And Europe, seat of so many societies influenced by Greek myths, is named for Europa, the maiden carried off by Zeus, who had disguised himself as a bull to trick her. 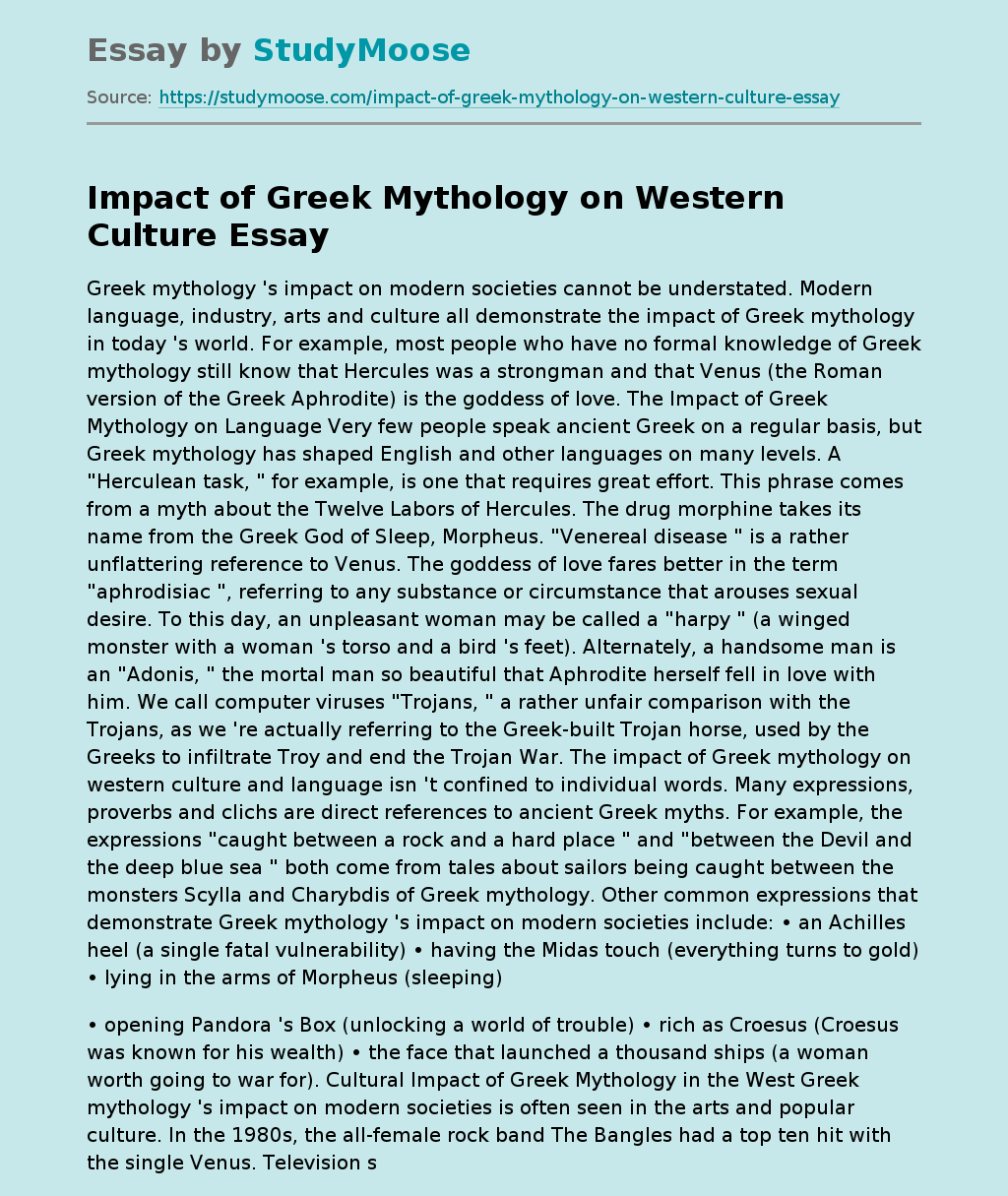