Abstract:
The Indian economy has shown considerable resilience to the global economic crisis by maintaining one of the highest growth rates in the world. The intensity of present economic meltdown is so high that it is being compared with the global economic recession in 1873, Great Depression of 1930’s and East Asian crisis of 1990’s. Global Financial Crisis is among the greatest financial challenges to the world economy which is originated in United States of America. The global economic slowdown is unprecedented in scale and has severe implications on policy formulation among emerging market.

Don't use plagiarized sources. Get your custom essay on
“ Impact Of Global Crisis On Indian Economy ”
Get custom paper
NEW! smart matching with writer

Currently India has one of the largest developing countries in the world. Its growth was interrupted by the global financial turbulence that was started in 2008 with the bankruptcy of Lehman Brothers.

Industries such as Information Technology, Pharmaceuticals, BPO, ITES, Textiles, Automobile and Banking & Financial Services Sector in India suffered setbacks due to shrinking patronage and demand from western markets. Strong economic growth in the last decade combined with a population of over a billion makes it one of the potentially largest markets in the future.

Every day the main headline of all newspapers is about our falling share markets, decreasing industrial growth and the overall negative mood of the economy. It is due to the world financial system is now undergoing a global economic crisis of staggering proportions.

The global financial crisis impacted India significantly, notwithstanding the sound banking system, negligible exposure of Indian banks to sub-prime assets and relatively well-functioning financial markets. The impact was mainly on account of India’s growing trade and financial integration with the global economy. What is Global Economic Crisis?

Global economic crisis refers to an economic scenario where the economies of countries all over the world have taken a beating. Whenever there is a global economic crisis, some companies will remove the employees for short span or for a long run. In that case along with recession, they will feel depression as well. An Economic Recession is a significant decline in economic activity spread across the economy, lasting more than a few months, normally visible in real gross domestic product, real income, employment, industrial production, and wholesale-retail sales. An Economic Depression is a sustained, long-term downturn in economic activity in one or more economy. Methodology:

Literature review and secondary research has been used to support the aim of the paper. The information related to the study was collected from the various books, magazines, periodicals, especially from the research reports and articles available over the internet, government websites etc. The study covers the thoughts and writings of various authors in the stream of industry, academician, and research. Objective of the Study:

The present study focused on the origin of the Global Economic Crisis and to analyze the reasons and its impact on Indian Economy which examines the trends of GDP growth rates, Foreign Direct Investment, Financial Sector, and overall Balance of Payment etc. Causes of Global Economic Crisis:

There are several underlying causes of the current global economic crisis. Most people believe that the major causes of the crisis include the following: fraud and weak underwriting practices, uncontrolled population growth, unscrupulous lending practices, prolonged boom in house prices, massive borrowing binge in the United States and European countries, growing culture of weak regulation etc. Impact on Indian Economy:

(a) Impact on Indian GDP growth rate:
Economic growth is the increase in value of the goods and services produced by an economy. With the help of a structural quarterly macro econometric model, this paper concludes that significant part of the fall in GDP growth by 2.8 per cent in 2008-2009 due to global economic recession and depression. It is expected to show up growth about 1.5 per cent in 2009–2010 and now slowly is on the recovery side. Among the major developing countries, growth in India is expected to remain ‘robust’. India’s economy is expected to expand between 7.7 percent and 7.9 percent in 2012-2013, down from 8.5 percent in 2010.

(b) Impact on Indian FDI inflows:
During the period subsequent to dotcom burst, there has been an unprecedented rise in the cross-border flows and this exuberance was sustained until the occurrence of global financial crisis in the year 2008-09. When there was a significant deceleration in global FDI flows during 2009-10, the decline in FDI flows to India was relatively moderate reflecting robust equity flows on the back of strong rebound in domestic growth ahead of global recovery and steady reinvested earnings reflecting better profitability of foreign companies in India. However, when there had been some recovery in global FDI flows, during 2010-11. The report anticipates that foreign investments in India could increase by over 20 per cent in 2012-13. (c) Impact on Indian Balance of Payments:

Fiscal 2009-10 has witnessed a global recovery after a crisis of severe worldwide proportions. The risks of economic crisis however remain, with need for caution in dealing with high public debt and unwinding of fiscal and monetary stimuli. The Indian economy also saw a turnaround, registering 7 % growth during 2009-10, after touching a low of 5.8 per cent in the third and fourth quarters of 2008-09. The balance-of-payments situation improved on the back of a surge in capital flows and rise in foreign exchange reserves, which have been accompanied by rupee appreciation. (d) Impact on Indian Financial Sector:

Until the emergence of global crisis, the Indian economy was going through a phase of growing domestic investment financed mostly by domestic savings and sustained consumption demand. This overall improvement in macroeconomic performance in India was attributed to calibrated financial sector reforms that resulted in an efficient system of financial intermediation, albeit bank-based; the rule based fiscal policy that reduced the drag on private savings; and forward-looking monetary policy that balanced the short term trade-off between growth and inflation on a continuous basis. India, though initially somewhat insulated to the global developments, eventually was impacted significantly by the global shocks through all the channels – trade, finance and expectations channels. This raised the issue that whether India is more globalised than what is perceived in terms of conventional trade openness indicators. Takeaways from the Global Crisis:

No doubt, India has been hit by the global economic crisis; it is clearly due to India’s rapid and growing integration into the global economy. The Global economic crisis and the current sovereign debt crisis offer, many regulatory and policy lessons that have come to the fore and are under various stages of implementation, I would flag some takeaways: too much of anything is bad like leverage, liquidity, finance etc. models do not fully reflect the realities of life and excessive reliance on quantitative models is fraught with risk and Finance should serve the real sector and not the converse. Conclusion:

While the developed world, including the U.S, the Euro Zone and Japan, has plunged into recession, the Indian Economy is being affected by the spill-over effects of the global financial crisis, the strategy to counter these effects of the global crisis on the Indian economy and prevent the latter from any further collapse would require an effective departure from the dominant economic philosophy of the neo-liberalism. It needs to be emphasized that implementation holds the key to bail out the Indian economy from the economic crisis. Our President Mr. Pranab Mukherjee has suggested that to reduce the pain of economic crisis, employers should cut wages all along the line to reduce costs, rather than retrenching workers and thus add to job losses.

RBI needs to neutralize the outflow of FII money by unwinding the market stabilization securities that it had used to sterilize the inflows when they happened. Taxes including excise duty and custom duty should be reduced to lighten the adverse effect of economic crunch on various industries. Also, the government should try and improve liquidity, while CRR and SLR must be cut further. Perhaps growth will bounce back. And the success of Indian companies in 2012 will depend more than ever on their ability to tap into these new opportunities in emerging markets, especially as they look to counter depressed demand at home and increased risk in developed markets. 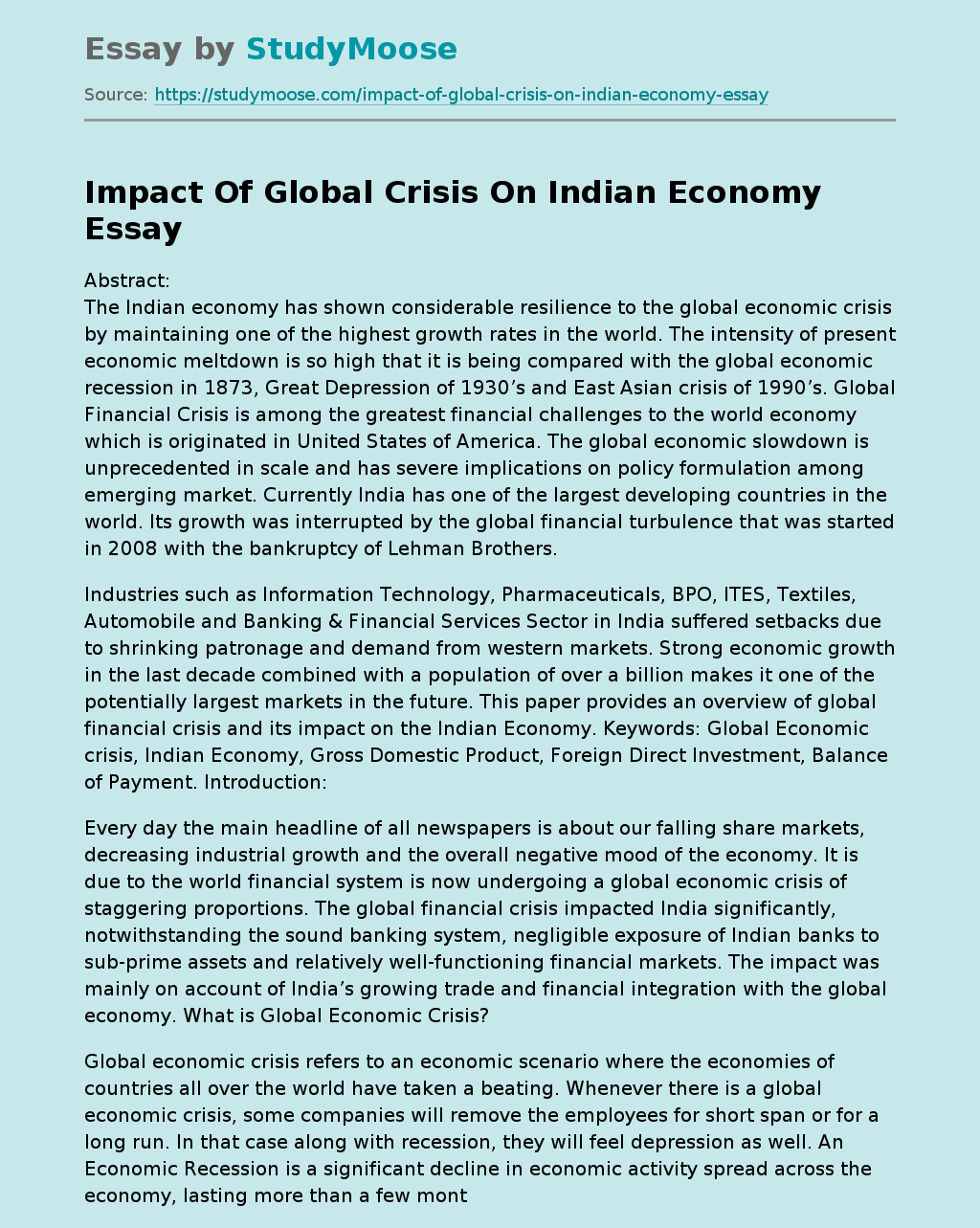