Impact of education on Iran post-revolution

Iran’s capital is Tehran, which is also the largest city and acts as a center for the commercial, industrial, administrative, educational activities. Apart from Tehran, there are other cities like Esfahan, Mashhad, Tabriz, Shiraz, Ahwaz, etc. It was estimated in 2002 that the population of Iran was about 66,622,704, which was almost double than that of 1975 population. The population of Iran is made up of numerous ethnic groups; Persians being the dominant and largest group, who have migrated from Central Asia to Iran in the beginning of the 7th century BC establishing the first Persian Empire way back in 550 BC.

Don't use plagiarized sources. Get your custom essay on
“ Impact of education on Iran post-revolution ”
Get custom paper
NEW! smart matching with writer

they include Gilaki, Mazandarani.

There are several other ethnic groups such as the Kurds and the Lurs. The official language of Iran is Modern Persian, which is derived from an ancient literary Persian language, which was written in the Pahlavi script; but in the 7th century, after the Arab conquest a new form written in the Arabic script developed during the 9th and 10th centuries; which formed the basis for the Modern Persian language used today.

The official religion of Iran has been Jafari Shia Islam since the 16th century about 93 % of all Iranians follows Shia Islam, mostly of the Jafari group.

In 1979 Iran’s constitution has assigned important political leadership roles in the government to the Shia clergy. Personal conduct and group behavior endurance of cultural values such as obligations to extended family, hospitality toward guests, and striving to act morally far predated the Islamic conquest of the 7th century and continued to influence the Iranian culture.

In1979 with religious rhetoric revolution it was heavily imbued. The leaders barring different forms of entertainment activities such as casinos, nightclubs and dance halls, movies featuring nudity or sexual themes, and pop and rock musical genres.

In spite of economic growth, strong Shia opposition led by Ayatollah Khomeini against the Mohammed Reza Shah has brought Iran closer to the situation of civil war; which was the beginning of Iranian Revolution resulting in the departure of Shah from Iran on Jan. 16, 1979. Finally on April 1, Ayatollah Khomeini declared an Islamic republic with a new Constitution reflecting his ideals of Islamic government. He also became Iran’s supreme spiritual leader (Valy-e-Faqih). As a consequence, many demonstrations were held to show dissent to the new rules, like extreme regulations on the code of dress of women.

Iran’s Education system: In 1906 after the country’s first constitution was drafted, public primary education was introduced in Iran, primarily in urban system, gradually expanding, but did not included secondary education (until 1925). During 1979 Islamic revolution, enrolment of only 60% primary school age children, and less than 50 % of secondary school age, has taken place in the public schools of Iran; adult literacy rate accounting only to 48 %. The reform in 1960 is known as the White revolution and the reform in 1979 is known as the Islamic revolution.

After the revolution, a reform in education system was brought up to fortify the nation through developing education . Education was included in the high priority list of the government, focusing on programs like adult literacy, constructions of new schools, and expansion of public colleges and other higher education institutes. As a result of that the literacy rate had reached for all Iranians aged 15 and older to 94. 6 percent by the year 2001; higher for males (96. 6 percent) than for females (92. 5 percent); and also higher in cities than in rural areas. Compulsory Education is made for children between the ages 6 to11.

Every village consisting at least a primary school, by the expansion of both public and private education system; and in 1996, 89. 6 % of primary school-aged children and 74. 2 % of secondary school-aged children’s enrollment in schools has taken place. But dropouts are still high in the rural areas. Improvement in the educational opportunities for girls after the revolution has taken place but the dropout rate is still higher for girls which can be evident from the fact that 87% of eligible age of girls though attended primary school, only 69% percent attended secondary school.

More than 30 tuition-free public universities apart from many other institutes of higher learning including medical universities, teacher training providing colleges, agricultural colleges, etc. are present in Iran. But up to 1996 only 17 % Iranians of relevant age were enrolled in higher learning institutions. The major center for higher education is Tehran, with more than 15 universities along with numerous colleges and institutes. Additionally, there are other Universities located in Hamedan, Esfahan, Shiraz, and Tabriz.

Besides, Islamic Free University that has been involved in the development of campuses in the cities throughout Iran since its establishment in the late 1980s and a private system of higher education consisting of theological colleges. The number of young Iranian women getting admitted in to the universities has been raised dramatically in the recent years. More than 60 percent women entries have been registered in the Universities, only in the last five years in Iran that is a surprising development for the Islamic Republic of Iran.

Education has a strong social value for the Iran’s women, according to experts who observe it as a way to achieve greater freedom. But some Iranian officials do still expression of concern about the trend. This growing trend of increase in number of the young women in Universities of Iran is regarded as a phenomenon in the male dominated society. University studies are used as a means to leave home, postponement of marriages, earning greater freedom and social respect by the Iranian women.

According to Dr. Said Peyvandi, a Paris-based professor, sarcastically, after the 1979 revolution and the country’s Islamization educational institutions the girls from traditional or conservative families began to go to school this may be due to the reason that the traditional families who would not sent their girls to school before, due to presence of men teachers or saying that the school was not Islamic has started sending them to school. As a result the girls took the maximum advantage from the schools’ Islamization, and also justifying their presence out of the home .

This growing number of female university graduates started to impact on Iran’s labor market already. The women attending the higher education in Iran has been increased since 1989 . Women entering into a number of professions, public as well as private sectors; and also taking an active part in the business world currently making up to 10 % of the work force. About a third of the women who were working were laid off by the new regime in the earlier years of the revolution but now, Iranian women are returning as factory engineers and specialists, instead of those female office workers and secretaries.

Which actually, is causing an influx of female specialists in Iran’s labor market, who can replace men. A labor force made up of women specialists can be seen in Iran presently that never existed in Iranian history. According to the managing director of an educational and cultural magazine ‘Lowh’ Mohammad Ghaed, the rise of many Iranian women to top professional positions that were previously dominated by men is observed; presenting a common scene such as women at the head of an office or a bank where they are capable of giving orders to their subordinates including men.

Iran’s family structures are also presenting the change raising the average marriage, fall in the birthrate, etc. Which are considered as a direct result of the growing number of women pursuing university education causing the improvement in conditions for women in Iran; according to Peyvandi. Seeing the greater social demands from women some concerns are raised especially by the conservatives who argue that the shift represents a danger to traditional ethics.

Recently a quota system was proposed aimed at limiting the number of women enrolling in courses like medicine, where predominance of female students can be seen; by The Education Ministry. Some conservatives and reformists are in trial to scale back the women’s overall access to higher education in Iran as it is resulting in the liberalization of women. Therefore they are also using economic excuses, trying to impose some restrictions, are even approaching for laws in order to limit the admission of women to universities.

In recent years Iranian women have made many great achievements but a larger part of society is still not ready to accommodate them. Over the last 10-15 years the problem of unemployment has worsened both in men as well as women, consequencely, there are no jobs for university graduates. Social issues like the number of families with annual incomes below the poverty line have been reduced from 47% to 19% during1979 – 1996; yet poverty continues to be a major problem of the society.

Measures like subsidies for food, fuel, and utilities to support low-income families have been taken up by the Govt. o decrease the impact of poverty. Inadequate Health care services in rural areas, widespread use of illegal drugs for recreation, especially among young people are some of concerns for the society. Various public social services including national health insurance program – providing free or low-cost health care in village clinics or city hospitals that are run by the government; providing pensions to the retired employees, survivor benefits to widows’ of Veterans killed in action or deceased retirees, disability payments, etc are going on successfully.

Reading Lolita in Tehran: One of the Novels, ‘Reading Lolita in Tehran: A Memoir in Books’ reflects the life of the narrator Nafisi, her personal and intellectual events in Iran after the revolution; she also narrates the dream of revolution among the Iranians and how that was shattered according to her. She also indirectly condemns the lowering of marriage age for girls to nine years by the Islamic regime, which took power in 1979 by referring to the incidence of a middle aged man becoming sexually obsessed with a 12 year old pubescent girl.

It also mentions her refusal to wear veil causing her dismissal from the university of Tehran in 1980. Though she criticized the restriction of freedom in the Iranian regime, she also called for self-criticism in her speech at the National book festival in 2004, one has to see what he / she (people) has done to create a particular situation instead of blaming wholly on the Islamic regime.

Impact of education on Iran post-revolution. (2017, Jan 30). Retrieved from https://studymoose.com/impact-of-education-on-iran-post-revolution-essay 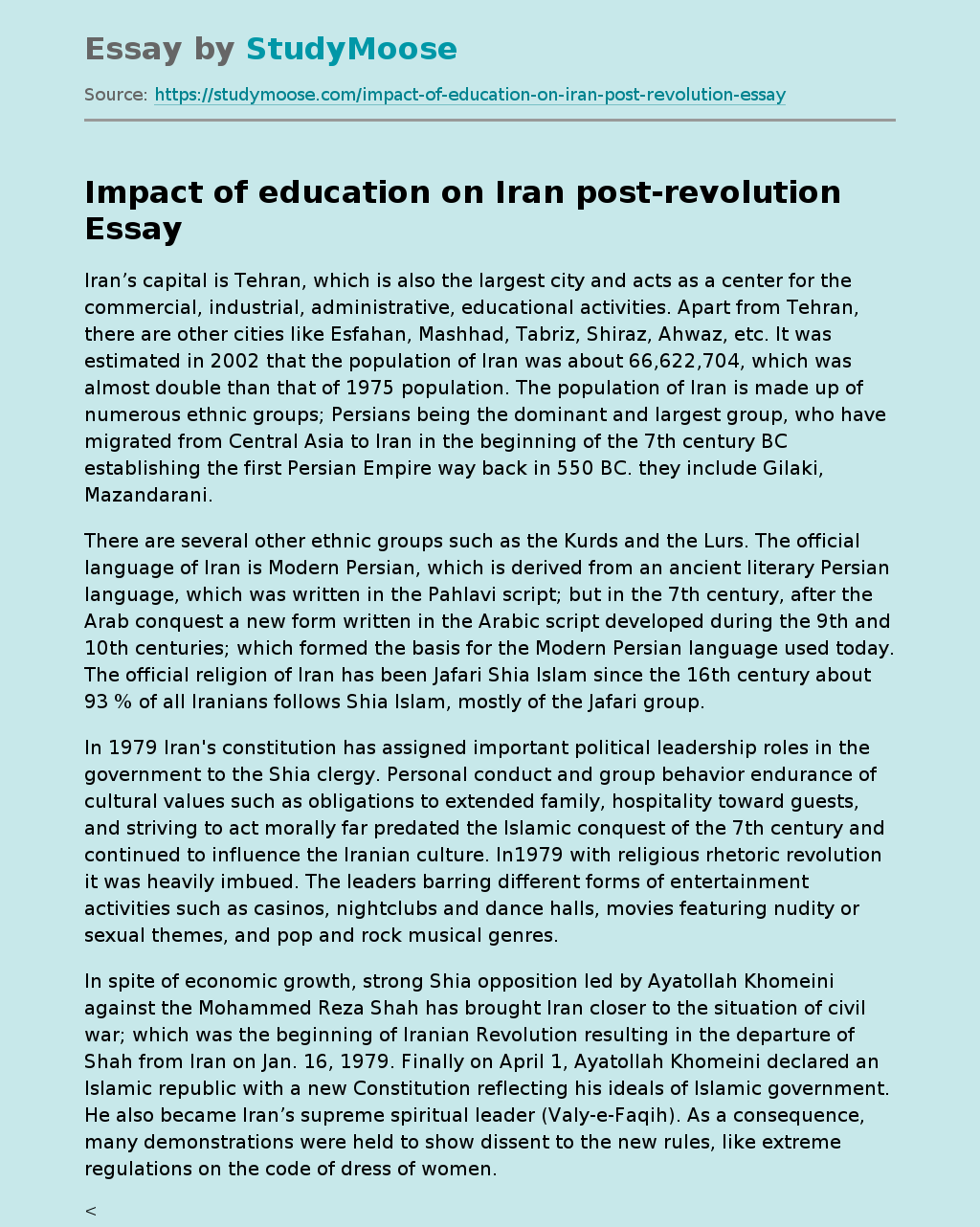