Impact of Book by Oliver Sacks on Me

‘The Man Who Mistook his Wife for a Hat’ is a book that the neuroscientist, Oliver Sacks collects the cases he has contacted into it. The title is one of the cases. It is a music professor who can see the things around, but because of brain disorders, he can’t distinguish the difference. He can recognize his wife as a hat and try to wear it to his head. This story touched me a lot and reminded me of my own.

Don't use plagiarized sources. Get your custom essay on
“ Impact of Book by Oliver Sacks on Me ”
Get custom paper
NEW! smart matching with writer

While reading this book, I feel the curiosity and thinking which my neuropsychology brings me.

For the sake of convenience, I have listed four phenomena in my own body. I want to try to explain and express the information I have collected and my thoughts one by one. Even, I am thinking that maybe our professor can give me some answers directly. I want to say that I have similar trouble with the protagonist in the story, but maybe, I did not go to the hospital for inspection and confirmation.

Proficient in: Literature And Science

What I have to state that I think I am a normal person.

First of all, my personal experience is that I always think that I can remember names faster than faces. If I spell his name successfully, I can easily remember it, but if I don’t often see the face, it is easy for me to forget who this person is. I am the type of person who can recognize a person’s face, but I have seen it once or several times.

I always remember the appearance and I can’t recognize it. I haven’t reached the level that can’t recognize my mother’s face. All the classmates I can know, that is. Newly recognized people, unless they are very impressed, it will be very difficult for me to recognize or remember.

This has to lead to the concept of face agnosia. In order to solve my confusion, I deliberately searched for relevant knowledge on the Internet. Prosopagnosia is also called face blindness. This is a defect caused by a nervous system problem. Some people with face agnosia will have unrecognized faces on some of their faces for example those who outside of relatives and friends. However, the visual abilities of these people are complete and can even identify some features of the face such as eye color, hairstyle and so on. To sum up, they can say that the visual ability is complete, they can identify the car house, and even some facial details. However, the ability to integrate the face is lost. Patients with face agnosia often have abnormalities in the fusiform area. There is a tissue called the fusiform face area in the fusiform gyrus. Although the academic community is controversial, it is generally believed that the fusiform ocular area is heavily involved in face recognition. Then it is natural that the face recognition of an abnormal person in the fusiform back is abnormal. The size of people with face agnosia is not small, and some studies indicate that they account for about 2.5% of the total population (Grüter et al., 2008). Just like the music professor in the story. Of course, the degree of each person is different, and it really is not so big to really affect life.

The second is that if the person’s face is dynamic, such as we are playing basketball or walking on the street, I can hardly recognize the other person’s face. In the latter part, I will express my guess about the cause of this problem.

Third, this is after I went abroad, especially after coming to the United States, I found it more difficult to distinguish faces than before. I remember that when I first came to school, the school assigned us different tutors to help us quickly enter the learning state. After a few times, I couldn’t remember the face of my tutor. Generally, I will take such a measure. After entering the office, I will say hello to them and see who is greeting me with enthusiasm and speaking more. Write here, I feel very sorry for the tutor. Anyway, it seems that Americans have the same feelings about the recognition of Asian faces, right? Because this scene is very similar to the author’s description in the story, I was shocked when I read it here, and then I thought, what should I do?

Last but not least, I have two boyfriends in my love experience. Why I want to explain that is I should have enough time for their faces to distinguish and remember. However, sometimes when I quarrel with my current boyfriend, I miss my ex-boyfriend very much. Well, I know that this is not good. But the problem is coming. I miss him all kinds of good things he did for me, but it is difficult to recall his face all at once. Unless you see a photo, the overall, vivid image will appear in my brain. Well, the next thing I have to say is that, in fact, my current boyfriend, I can’t think of his face, too. I need to look at the photos of the mobile phone. At this time, I want to explain for myself. I am studying in the US now, he is in China. We don’t usually have video chats, usually more voice chats, so… well, I think this is part of the reasons, at least in my mind.

At this time, I need to add some information: from elementary school to junior high school, the algebra in my mathematics has been very good, and it is the kind that can participate in the Olympiad Competition in our school, but once it involves the problem of solid geometry, or when the brain needs to move the 2D graphics into 3D graphics, it is very difficult for me. How difficult is it for me? When I took the college entrance examination, I used the algebraic vector method to solve the three-dimensional geometry problem. What to do, I really want to hold my face, it is really shameful.

When I tried to search for some answers, I found that so far, maybe the academic community has not found any drugs that can help face agnosia. But some interesting things have also been discovered. For example, in the Kress and Daun (2003) paper, many people with facial amnesia also have face amnesia, so it is possible to have hereditary. Some studies also mentioned that many face amnesias involved in the experiment were particularly intelligent (Behrmann and Avidan, 2005; Kress and Daun, 2003; Jones and Tranel, 2001). I still insist that I am a very normal person, but reading IQ special part also makes me feel a happy time.

In fact, I don’t know what kind of format a correct reflection paper should be, but this is the part I think about and really want to write. Where the book appeals to me is to think about the unknowns of the brain and look forward to the wisdom behind this unexplained. When I read the point that I touched myself, I will gradually be cured with myself reading with the article, at least thinking about the magical effect of summing up it. Although it is a very small book, I love it. It also makes me think that psychologists are really a group of scholars who are exposed to magic and unknown, and I have countless embarrassment and dreams for my future career.

Impact of Book by Oliver Sacks on Me. (2021, Sep 09). Retrieved from https://studymoose.com/impact-of-book-by-oliver-sacks-on-me-essay 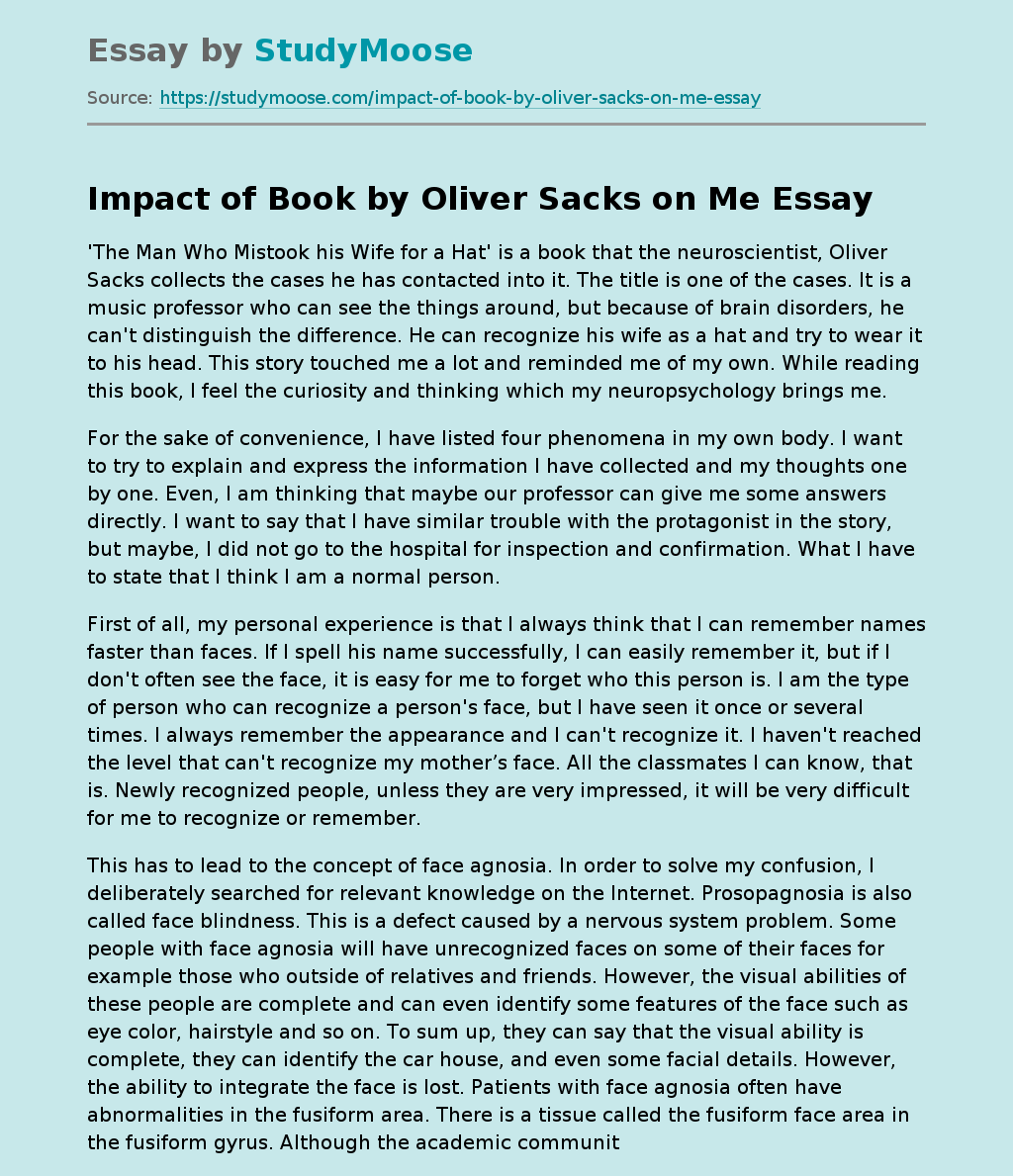