Immigration and Border Patrol Among Mexican and American Lines

In the past years, immigration and entering the United States illegally has remained a large issue that would be debated numerous times within the American government. Since the topic recently sparked controversy revolving around President Trump’s plans of action for his future leadership of the United States, many have been worried about the future of those seeking asylum into the United States, with the ongoing argument being about those entering from below the Mexican border in South America. From this, specifically that of what it could pave in the near future, and the overall ethic of the blueprint that politicians want to make a reality for the future of South American Immigration into the United States.

Don't use plagiarized sources. Get your custom essay on
“ Immigration and Border Patrol Among Mexican and American Lines ”
Get custom paper
NEW! smart matching with writer

As of right now, the border fence between the U.S. and Mexico is a rust covered, 18-foot fence that runs for a couple miles on either end of the international official border crossing, and he plans to enlarge and continue that wall across the entire border.

Although there is already a significant amount of disagreement over the idea of whether or not it will be able to provide the border security that is promised both within the government and among the citizens of America, advocates of the wall are also faced with environmental challenges and the debate on if it is morally correct.

Since 2017 after the inauguration, illegal immigration rates have risen during Trump’s presidency and they have made it evident that he plans to increase the security on the US/Mexico border.

They claimed that they will have criminal prosecutions for each and every adult immigrant who had attempted to get into the country without proper identification. The penalty can be up to six months in prison. The practice of separating parents from the children has alarmed immigrant and human rights advocates already. Before now, authorities had rarely ever prosecuted people who illegally crossed the border unless they were also found committing another crime, like smuggling other substances or engaging in criminal activities while attempting to get into the country from South or Central America.

From these policies however, they may have not thought of the consequences they could soon face in the future and what their decisions now can imply for later on. If they choose to stand with their decision of making every adult go to trial then face a penalty, that means that they will be clogging the courts with misdemeanor cases to the extreme. With this, each individual will have to wait until their specified court date, in which they will be forced to attend and live within “detention facilities” for months upon months until the unidentified date. During this process, they will be separated from their family. Unaccompanied children will either be sent to live with other family or put into foster homes which can have detrimental effects on everyone’s future together, and it is a completely new environment that will result in both culture shock and psychological harm. Another consequence of Trump and his administration is the strain that will ultimately be put on the nation’s official border crossing. If this call to action becomes a reality, many things that were unexpected can show up and create problems for everyone involved.

When evaluating and discussing the topic concerning the border and how it applies to everyone’s morals, it is evident to see that it almost does not ever. There is a constant debate on what is just and what is not. For example, one place an immigrant could end up right now is an American built ICE, or Immigration Customs Enforcement Agency, detention facility if found travelling across the border undocumented. According to the Global Detention Project, there is speculated controversy on the safety and health of the immigrants who are signed in every day. On a typical day, America has about 30,000 people in administrative immigration detention at an estimated cost of almost $150 a day, and Trump claims that these costs would benefit his wall and keeping people out rather than funding the detention facilities where undocumented immigrants are currently staying.

The massive stretch of land that separates Mexico from the United States spans 1,219 miles and is home to more than 7,000 animal species, and experts refer to it as one of the most biodiverse regions in North America. If this were to be suddenly blocked off, researchers can infer that it will cause habitat fragmentation, ultimately leading to extinction or destabilization for anything and everything that roams to and fro around that specified area. If the massive cement wall were to be built, just the production of the cement would be a major source of greenhouse gas emissions, further affecting the climate and its adaptation. In addition, from El Paso to Brownsville, there lies Falcon International Reservoir as well as Big Bend National Park which would lose both the visitors and beauty by a concrete wall. From that, the ecosystem could be heavily affected due to the complete cutoff to the other side. In addition to this, Gabriel Diaz Montemayor, an assistant Professor of Landscape Architecture at the University of Texas wrote an article mentioning how the border wall will ultimately undermine the binational initiatives and the shared environment between Mexico and the United States. As for the environment outside of the border lines, the Humanitarian Practice Network, an excessive amount of immigrants or refugees in an area leads to depletion of sources, further taking a toll on the economics behind gained enough resources from around the globe for people to survive.

From this constant debate that has been going on since immigration from South America first became a national issue, many different viable solutions have been made up in hopes of finally resolving immigration as a whole. According to the Institute for Policy Studies, one of the best alternatives to building a physical border between cultures is to help fund Latin American Nations through United States Aid to cancel the poverty they try so desperately to escape. As for the ethical viable solutions concerning detaining those seeking asylum, funding for the development and expansion of ATD, Alternatives to Detention, programs has steadily increased over time. Congress had appropriated $43.6 million for such programs in 2007 and $91 million in 2014. In addition, ICE’s plan for the years 2010-2014 identified a need to develop a cost effective ATD program that would enjoy high rates of appearances in removal proceedings. On the other hand, advocates argue that the use of ATDs has not reduced reliance on detention and some ATD programs continue fail to comply with basic due process requirements. In a different light, order to be considered morally correct and save the environment surrounding those specific areas, a wall built along the entire border should not be built and the idea should be completely thrown away.

Other possible solutions stated by NEJAC, the National Environmental Justice Advisory Council, include strengthening and promoting environmental enforcement, government involvement in programs on the border, and building community capacity and promoting reform of U.S., Mexican, and international institutions. In order to combat the environmental crisis that would be implemented by the border wall, many suggest using the funds to build a technologically innovative wall alternative. However, the major issue behind the overarching immigration that is currently occurring, is how the United States, as well as the politicians in government, will choose how to allocate funds for the most viable solution that will promote the best possible outcome.

Immigration and Border Patrol Among Mexican and American Lines. (2021, Oct 12). Retrieved from http://studymoose.com/immigration-and-border-patrol-among-mexican-and-american-lines-essay 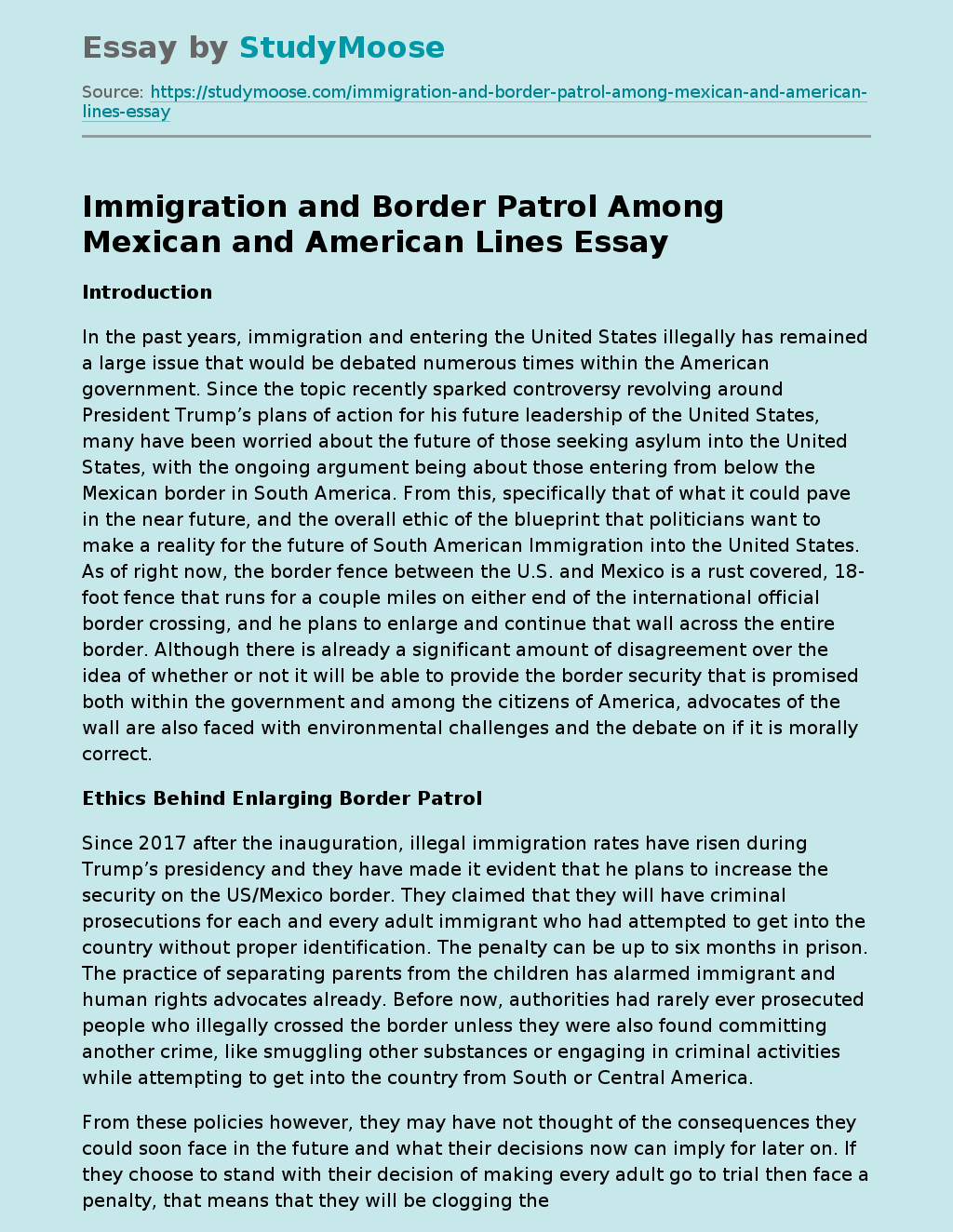