Immanuel Kant was a German Philosopher who was born on April 22, 1724 in Kaliningrad, Russia. At age 16, he enrolled at the University of Konigsberg where he studied philosophy. Kant is best known for his work in the philosophy of ethics and metaphysics, but he made significant contributions to other disciplines. He made an important astronomical discovery, namely a discovery about the nature of the Earth’s rotation, for which he won the Berlin Academy Prize in 1754. Kant developed his moral philosophy in three works: Groundwork of the Metaphysic of Morals, Critique of Practical Reason, and Metaphysics of Morals.

Don't use plagiarized sources. Get your custom essay on
“ Immanuel Kant – Philosophy ”
Get custom paper
NEW! smart matching with writer

Immanuel Kant’s contribution to our study of business ethics is mainly noted in Chapter 4 of the textbook: Moral Duty, Rights, and Justice. Kent talks about the Categorical Imperative. Categorical imperatives are principles that are intrinsically valid; they are good in and of themselves; they must be obeyed by all, in all situations and circumstances, if our behavior is to observe the moral law.

Kant stated that the moral means and ends can be applied to the categorical imperative, that rational beings can pursue certain “ends” using the appropriate “means”.

The categorical imperative may be based only on something that is an “end in itself”. That is, an end that is a means only to itself and not to some other need, desire, or purpose. Kant believed that if an action is not done with the motive of duty, then it is without moral value. Every action should have pure intention behind it; otherwise it was meaningless.

Kant thinks our actions only have moral worth and deserve esteem when they are motivated by duty. Kant also believed that an action from duty has its moral worth not in the purpose to be attained by it but in the maxim in accordance with which it is decided upon, and therefore does not depend upon the realization of the object of the action but merely upon the principle of volition in accordance with which the action is done without regard for any object of the faculty of desire. References: 1. DeGeorge, Richard T. , 2010 Business Ethics, 63-64 2. http://en. wikipedia. org/wiki/Immanuel_Kant#Moral_philosophy. 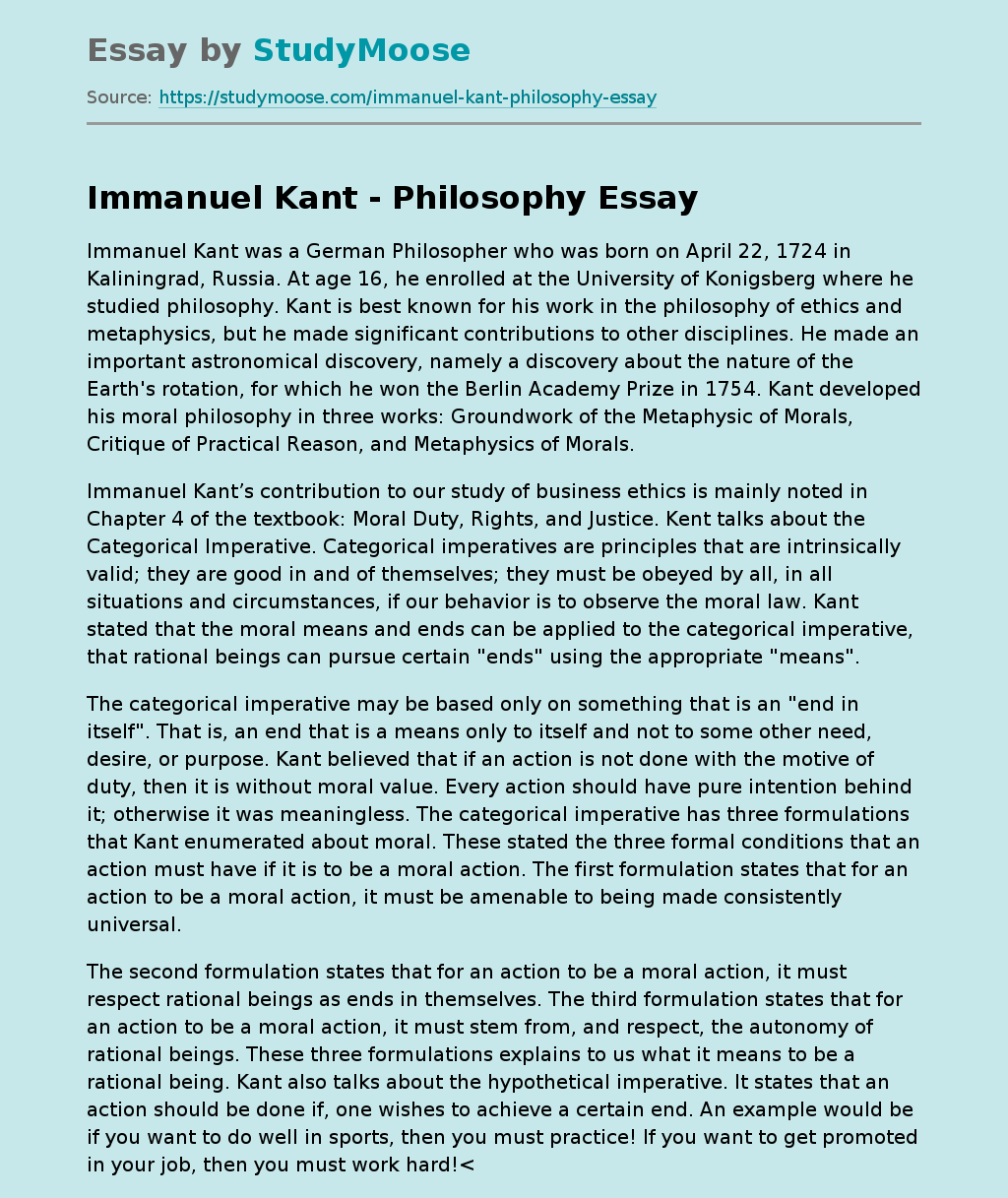